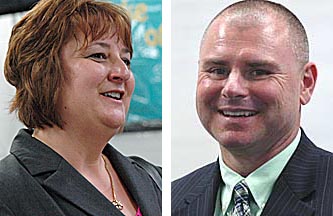 Superintendent candidates Tammy Carnahan, left, and Richard Spindler visited Yellow Springs Monday and Tuesday nights, respectively, for another round of interviews and to meet with the community. The third candidate, Mario Basora, visited Wednesday.

Starting down the home stretch of the Yellow Springs school superintendent search, candidate Tammy Carnahan came to Mills Lawn on Monday night and candidate Richard Spindler visited on Tuesday night for another round of interviews and a talk with the community. The third candidate, Mario Basora, principal of Wyoming Middle School in Cincinnati, visited on Wednesday night (his profile will appear on the YS News Web site on Thursday, April 8).

At a special school board meeting tonight, the board will either choose one of the candidates for the position or decide how to move forward with the search process. During that meeting, the board will also vote to approve the Mills Lawn and YSHS principals and hear a presentation on the district’s performance audit.

The visit with each candidate began with a reception, followed by a 30-minute presentation from the candidate and a period of question and answer.

Carnahan, 47, began her presentation with a photocollage of her family, including her son and her husband at the home they share less than three miles from Yellow Springs. She grew up in Pike County, earned a master’s degree in elementary education at Ohio University and later became licensed as a principal and then a superintendent. She started out teaching for 10 years and then learned that she could affect more lives if she became an administrator. She served as principal of Darby Elementary in Pickaway County from 1998 to 2000 and then became principal of Enon Elementary for seven years before taking over as assistant superintendent of that district, Greenon Local, where she currently works.

As assistant superintendent at Greenon, Carnahan said she has learned a lot and is more prepared than she was in 2007, when she applied for the superintendent’s position in Yellow Springs but withdrew when she got the position at Greenon. She has built experience in strategic planning and levy campaign management, and believes communicating with and getting feedback from the community is a vital part of an administrator’s role, she said. She has also been involved in curriculum development to find gaps and redundancies in the curriculum, employing short-cycle student progress assessments and using the Danielson model of teacher evaluation and remediation.

Carnahan believes strongly in service learning, she said, and was deeply gratified by a project her students at Greenon organized to send books and aid to a sister school in Mississippi after Hurricane Katrina.

“Service impacts a child’s ability to affect change in the world and to understand what others go through,” she said. “Our kids needed to know that they were making an impact.”

Carnahan believes she is a good fit for Yellow Springs partly because of her team-oriented leadership style. She aims to get stakeholders involved in developing a shared vision and then creating a healthy, accountable environment in which everyone feels valued enough to achieve that vision, she said.

She also feels up to the task of dealing with financial challenges, especially given her 10-year working relationship with the new treasurer, Dawn Weller, who came from the Greenon district. And she is excited about utilizing technological tools, such as distance learning, podcasting, social networking and mobile educational devices, to respond to needs such as a science and math initiative and a credit flexibility program for high schoolers. She believes in project-based learning, and once had a student who earned course credit in English, math and shop by writing about, designing and building a boat.

About 20 residents and school officials came to hear Carnahan’s presentation and to ask questions. One person asked about Carnahan’s attitude on zero tolerance policies, especially regarding drugs. She gave an example of a former student at a school with a zero tolerance policy who had turned in a paring knife his mother had packed in his lunch bag. Carnahan used the incident, in which the school was forced to suspend the student, to illustrate that blanket policies are not always good and that administrators “have to look at every situation and judge it” independently. She added, however, that schools should never tolerate bullying or intimidation by students or teachers in any situation. And that schools should have zero tolerance for drugs.

Regarding a question about dress code, Carnahan said that a code should be established through a community discussion and that it probably should include some standard that allows freedom of expression but prohibits sexual or drug-oriented messages. In the event that a dress code is violated and a parent defends the student, Carnahan said that she would listen to the parent’s concerns and consider a policy change.

In response to a question about how to balance the attention given to gifted children versus students in special education, Carnahan, whose son was identified as gifted, admitted that the state funds special education at a higher level than gifted programs, which impacts the school’s ability to respond to a situation she agrees is a problem.

“How should the school respond to ineffective teachers?” one resident asked, to which Carnahan said that she knows the difficulty of not renewing contracts with the few teachers she has had to terminate. Her first response is to inform the teachers of the problem and provide them with resources to correct it. At one school she developed a “critical friends” partnership between teachers who could help support one another. Remediation does work sometimes, but in the event that it doesn’t, effective administrators have to recognize what an effective teacher is and how to intervene to meet the students’ needs.

“Truly highly effective teachers have the single most impact on student achievement,” she said.

Richard Spindler, 43, is currently the superintendent of Berne Union Local Schools, a district located about an hour west of Pittsburgh that has 1,000 students in pre-K–12th grade and is rated effective, though it passed 28 of 30 indicators. As Berne’s top administrator for the past two years, Spindler has united the district by creating administrative teams and has led by giving other leaders the resources they need to educate effectively, he said on Tuesday night. Berne’s elementary school is rated third in the state.

Prior to his post at Berne, Spindler served for two years as the superintendent of Georgetown Exempted Village Schools, a district of similar size also located in eastern Ohio. There, Spindler instituted nine-week short-cycle testing assessments to determine what students needed to learn and what teachers needed to do differently. That school also earned an Energy star award for reducing its utility consumption, which saved the district “tens of thousands of dollars each year” and helped to increase the carryover balance by $500,000 in two years. Spindler also spent five years as a middle school principal and four years as an elementary school principal. For the seven years prior to that, he was a teacher, coach and athletic director and served as the head football coach for Yellow Springs High School in 1992. He holds a masters degree and principal and superintendent certificates and is in the process of earning a doctorate in K–12 leadership at Northeastern University in Boston.

Currently a resident of Chillicothe, Spindler and his wife are seeking a diverse and active community in which to raise their young daughter, he said. He is also excited about a district that values education enough that 85 percent of its graduates go on to college.

To illustrate how education is changing, Spindler showed a video about using technology to create a 21st-century learning environment for students who are “native to the digital world” and able not just to read books but to harness the rapid communication capabilities of the Web.

Schools can innovate while using new state mandates to improve the curriculum through programs such as credit flexibility for high schoolers, financial and health literacy and value-added programs that evaluate students year-to-year, he said. Schools should also integrate career-oriented programs with internship opportunities that prepare students for college and the workforce. Progressive schools need to begin to teach critical thinking and develop a mission to graduate students who can serve the needs of their surrounding community, Spindler said.

As a superintendent, Spindler sees his role as a liaison between the school board, the principals and the treasurer to facilitate the Ohio Improvement Process, market the schools and bring in money through grants, combining staff positions and cutting contractor costs. Under Spindler’s leadership, Berne brought in 30 new students to the district by starting two special needs preschools, he said.

During the question and answer portion of the evening, Spindler responded to a question about the importance of testing by saying that testing is a good way for teachers to assess how well students are learning. How then would he improve the quality of teachers who get stuck in a rut? Spindler said that teachers must be given the right tools and effectively trained in how to use them. Schools should use teacher evaluations and consider the source of the complaints against them.

Regarding his opinion about zero tolerance policies, he said that zero tolerance doesn’t provide a solution for the inevitable exceptions to every rule. Nor does it allow opportunities for education and rehabilitation, and it seems unproductive not to give people a second chance, he said. And about the negative effects of technology, Spindler expressed the need for caution in exposing students to inappropriate content online.

Regarding his source of motivation, Spindler said that he became a teacher and administrator to prepare youth to lead productive lives. Concerning his greatest strength and greatest weakness, Spindler said that he is able to relate to almost anyone, but that he doesn’t know the community intimately and it would take a little time to do so.