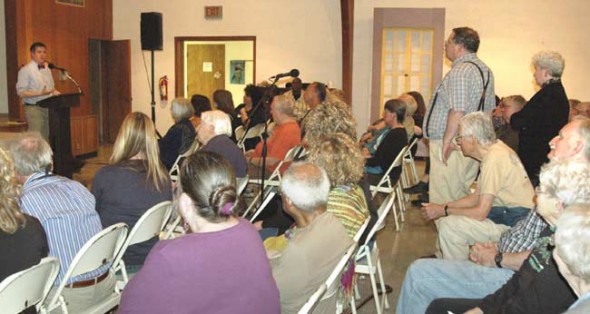 More than 150 villagers attended a town hall style meeting at the First Presbyterian Church to hear about progress at Antioch College on Wednesday, April 21. Above, interim president Matthew Derr responded to a question from Neal Crandall while Lee Huntington waited her turn. (photo by Diane Chiddister)

In the fall of 2011, the newly revived Antioch College will start with a very small student body and work its way up to about 600 students, according to Interim President Matthew Derr. Consequently, the campus will have empty buildings that leaders hope will be used for collaborative efforts with other entities.

“We need strategic partners, such as this community,” Derr said.

For instance, talks are underway regarding the possibility of collaborating with village groups to use college facilities for a green business incubator, an arts center, and a health and wellness facility, he said.

Providing space for new initiatives is just one way that the college can be an asset to Yellow Springs, he said.

“It’s important for the college to be a good neighbor,” Derr said, stating that the college will also provide job growth and cultural activities. “We think Antioch College will contribute something significant to the creative life of the community.”

Derr spoke last Wednesday, April 21, at a college-sponsored town hall meeting in the Presbyterian Church. About 150 villagers attended the event, which aimed to give villagers an update on progress toward the college’s revival. Antioch College became independent from Antioch University in early September after a two-year alumni-led effort to re-establish the college as an independent liberal arts institution.

Several who attended thanked college leaders for bringing the college back to life after it was closed by the university. However, villagers also didn’t shy away from asking tough questions.

In the more than 40 years since her graduation from Antioch, Toni Dosik has heard “many great ideas” about sustaining the college, followed by “many disastrous executions,” she said. “What is different this time?”

Having fought hard to gain its independence, college leaders are acutely aware of the college’s unique mission, Derr said, stating that “saving the college was not a short battle.”

Especially significant is that the college now has a structure that will enable it to succeed, Derr said, as compared to its recent history as one of several campuses in the Antioch University system.

“The most important change is that now there is one college, one board, one president and a single mission to serve as a liberal arts college,” Derr said. “That makes all the difference.”

At the beginning, a video presentation identified the proposed new curriculum developed by the Arthur Morgan Fellows, who created the program after traveling around the country last fall to consult with alumni groups. However, Derr emphasized that, “This is a progress report. Nothing is set in stone.”

The most distinctive feature about the new curriculum is that it is a three-year rather than a four-year program, in that students will be able to complete their bachelors requirement in three years. However, students who wish to take longer may do so.

The purpose of the three-year plan is to make a liberal arts education more affordable, according to Derr.

In their first two years, students will focus on “foundation” courses that “focus on the development of the core competency of critical thinking, reading, writing, oral presentation, visual interpretation and analysis, qualitative and quantitive analysis and experiment” according to the presentation. Students will choose 16 courses that provide a liberal arts core education during this time, along with culture and language studies to prepare them for a global co-op experience.

Compared to the current programs in most colleges and universities that offer “narrowness in the guise of specialization” the Antioch College curriculum will focus on critical thinking and problem solving, according to the presentation.

“If the next decade is like the last, the majority of professional opportunities available to undergraduate students do not yet exist, and most will require the use of technology that is only in the process of being invented,” according to the presentation.

Students will also alternate academic study with real-world work experience, in a continuation of the college’s historic co-op program.

“Antioch will retain its uniqueness as the only college to require full-time work of all students,” Derr said.

Students will focus on their chosen field in their third year, which will include a “major colloquy,” a 12-month course with both on- and off-campus online components that support both academic work and an independent project.

In response to a concern from former Antioch College professor Dimi Reber that the shortened time-frame could sacrifice in-depth study, Morgan Fellow Scott Warren said that the new program will not be a shortened version of the old one.

“We’re not cutting four years to three,” he said. “We’re reorganizing the three years so that students end up with 120 credits.”

“I think you’re doing this the right way,” he said. “The most important thing is not learning a technology but critical thinking and problem solving.”

Current social networking technologies will be used to connect off-campus students with on-campus activities, according to Derr, who said college leaders have studied models at other colleges to identify how best to make use of those technologies.

The first class that enters the revived college in the fall of 2011 will have only 25 students, and all will have their costs paid by the college.

The college will foot the bills because “we view these students as pioneers who are helping us to develop” the new curriculum, Derr said.

The funding will be provided by the college’s endowment, much of which is restricted to scholarships.

Gradually, the campus will be able to hold 300 students, with the goal of a student body of 600, with half on campus and half off campus doing work-study.

College leaders aim to achieve accreditation in time for the graduation of the first class, and they’re hopeful that students’ coursework will receive retroactive accreditation. In a catch-22 of higher education, colleges that seek accreditation must already have students, Derr said.

In response to a question from Richard Lapedes regarding strategic financial planning, Derr stated that “We’ve projected the financial needs of the college conservatively” without assuming revenues from grants or stimulus funding. The college has an annual fund goal of $2.8 million this fiscal year, with a projected 3 percent annual growth rate, he said.

So far this fiscal year, the college has received $1.6 million toward that goal, and has raised more than $16 million toward its 5-year capital campaign goal of $50 million. On average, 50 percent of college alumni donate to their alma mater, but only 12 percent of Antioch College alums donate, so there is considerable room for growth, he said, noting that many formerly unengaged alumni have become engaged.

“We have seen our beloved Antioch sink and close,” he said.

In an emotional statement, Lee Huntington took issue with Derr’s opening statement that Yellow Springs is once again a college town.

“We have two colleges in Yellow Springs,” she said, referring to Antioch University McGregor, and stating that she was “asking you not to tear me apart” by leaving McGregor out.

He did not mean by his statement to dismiss McGregor, Derr said. Rather, he said, “McGregor has a noble mission but it’s different than the college’s. We’re now two separate entities in the same town.”

Derr said he is looking forward to collaborative efforts with the new McGregor president Michael Fishbein.

In response to a concern from Bob Baldwin that he witnessed “30 years of drift and decline” at the college and an “atmosphere of mediocre performance” by leaders, faculty and students before it was closed, Derr said that the college decline was mainly linked to a lack of resources.

“The reality is that what we have now is what will shift the college,” he said, stating that “I think the way we’ve stewarded those resources have shown” the caring that current leaders feel for the college.

But the college also needs continued assistance from the community, according to Julian Sharp, the new coordinator of volunteer services. While financial help is critical, physical help is welcome as well in the upcoming efforts to improve the campus facilities.

“Regardless of your skill level, there is something for everyone,” Sharp said. “We need you to move forward.”