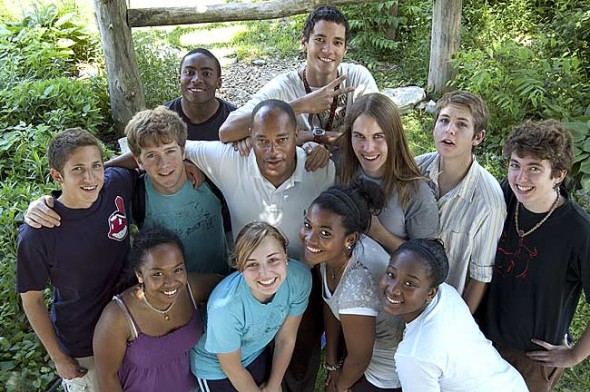 A YSHS principal who ‘gets us’

Of the thousands of youth he has mentored over the past 30 years and the stories that go along with each individual kid, there are a few that stand out in clear relief for Yellow Springs High School Principal John Gudgel. One goes like this.

It’s a senior class trip in New York City, and Gudgel and fellow history teacher Joyce McCurdy are taking the students to Rockefeller Center. Some of them have never left southwest Ohio, let alone stepped foot in one of the nation’s premier performance halls wearing a suit and tie. But there they are in Central Park, all dressed and waiting to leave, when one of those infamous pigeons lets loose on the new suit pants of an unsuspecting student. It’s the look on the kid’s face at that moment that is burned into Gudgel’s memory today. He felt the kid’s anguish, just as he feels the elations, disappointments, victories and sorrows of all the students he shepherds every day, hoping to make a positive difference in their lives.

Gudgel’s gift of empathy and support has won the love and respect of almost every youth who has attended school in the community. And it’s a subject students take seriously. At an evening event at the school last week, a group of boys were clowning in the parking lot. When the subject of how they felt about “Gudge” came up, all five of them wedged themselves into an instant huddle to say something. And the gist of it was that Gudgel gets them. Michael Kellar, a ninth grader, put it this way, “He’s an inspiration to me — he’s a father figure to the school.”

Gudgel started out as a student in Yellow Springs schools, graduating YSHS in 1975. He came back to substitute teach for a year in 1979 and a year later was hired as the McKinney Middle School (then Morgan Middle) social studies teacher and as a track coach. In 1994 he took over as the school’s guidance counselor, where he could really spend time talking to students and responding to their needs. He would have stayed right there, he said. But in 1995 Principal Cynthia Holt retired suddenly, and Gudgel was asked, or “coerced, summoned, drafted,” he said, to step in as interim for a year. It was the longest year he could have imagined.

It wasn’t all bad. As principal he could still interact with students every day, and he continued to coach track, where he felt he had more continuous time with them. But his suspicions that overall his time with the kids would be lost to paperwork were quickly confirmed. Yet at others’ encouragement, he applied for the permanent position and began studying for his license as a principal.

He does have selfish regrets, he said last week. Had he remained in guidance, he could have continued to relate to students more at their level and not had to play the heavy. He could have avoided the conflicts between students and teachers, parents and teachers, and school-wide issues such as leaving campus at lunch time, censorship and drug dogs in the schools. And personally, he would have had more time to spend with his own family.

“At some level this job has not been enjoyable, the long hours, the confrontational moments – it’s tiring and it wears on you,” he said.

And professionally, Gudgel likened the transition from teacher to principal to going from a union member to a scab. But even that awkwardness was dwarfed by the monumental challenge of becoming the boss of his former teachers, he said.

So in 2006, when he was again encouraged to take a higher administrative position by replacing then-Superintendent Tony Armocida, he declined to take an even further step away from his students.

Gudgel is the first to admit that his biggest challenge as a principal has been handing down tough decisions regarding students, staff or faculty. Non-renewing a teacher contract, expelling a student or telling a kid that he or she won’t be graduating with the rest of the class puts a finality on a situation Gudgel would so much rather fix.
Last week a student came into the office puffed up with anger, and Gudgel asked what was wrong. The student spewed complaints about a teacher who hadn’t allowed him to make up an assignment.

“Well, let me ask you this,” Gudgel said calmly. Why had the student not completed the work in the first place? Why had he taken so long to make it up later? They exchanged rather knowing looks, and nothing more was said.

For some principals with busy schedules, the impulse might be to use forceful authority to demand things of students. For better or for worse, Gudgel said, his approach is to listen first and get “kids to realize their accountability and learn from their mistakes,” he said.
“First kids want to be listened to, acknowledged, to feel like someone cares,” he said. “The consequence might be the same, but at least the student understands” that he is responsible for his actions.

Students respond to this approach and testify to feeling heard.

“He always tries to understand the students’ side of it,” according to junior Nicky Sontag, who cited the pulse meetings, student review board and assemblies Gudgel has initiated over the years to gather student opinion on issues such as drugs in the schools.

“He helped me out with my first five detentions,” sophomore A.J. Wagner said about the punishments he got for technical indiscretions that were less malicious than playfully motivated. Freshman Kellar agreed. “I’ve been in trouble most of my life, but he understands that, like when we’re playing around, we’re just boys being boys,” he said.

“He doesn’t just look from the teacher’s point of view. He’ll find out what happened first,” sophomore Greg Felder said. The kids agreed that everyone respects him for that reason.  “Even the bad kids don’t give him lip,” Wagner said. “I don’t know what it is about him, but he gives us so much respect.”

What relationship he has with the students he tries to share with others, according to Armocida, who would sometimes accompany Gudgel on his regular lunchtime supervisory rounds.  “He’d introduce me, saying, ‘Do you know who this guy is? This is your superintendent,’” Armocida recalled. “I got to know a lot of the kids, and a lot of that is because of John.”

According to Joyce McCurdy, Gudgel “is the principal, but he is also a man of principle.” She couldn’t put her finger on it, but the essence of Mr. Gudgel evokes something Biblical, she said, referring to James 1:17 and describing him as “quick to listen, slow to speak and slow to become angry.”

“He enjoyed counseling the best in his career because he always wants to make things work out for people — there’s a spiritual quality there,” McCurdy said.
Some of his own lessons he learned as a child at Mills Lawn School. In fourth grade he aced a social studies test and learned that he was a smart kid. Later that year he won a race against everyone in the school, and that impressed him even more.

“When I recognized that I had an athletic gift, that suddenly became the most important thing to me — I could run fast, and I played that up to the best of my ability,” said Gudgel, who committed himself to the sport and ended up not only winning state championships in sprints but also leading dozens of his students to their own regional and state victories. Applying dedication to one’s talents to achieve excellence is a lesson he aims everyday to instill in his students.

In that area he has also achieved profound success, evidenced by the hundreds of messages of appreciation from current and former students who have posted on his Facebook page.  “Good Luck Gudge!” Derrick Stewart wrote: “I know for a fact you improved me as a Man. I appreciate you as a friend, a teacher, a mentor, a father figure, a role model, an educator, a strong black man, a leader, a comedian, a coach, and most of all, a REAL STAND UP DUDE!”

Thirty years with one school is long, and Gudgel said that after being at the high school, where he deals with kids bringing lighters and homemade bombs to school, he is ready to sit down with an 8-year-old with snot dripping from his nose and simply ask him what he wants to be when he grows up. And that’s exactly what he plans to do. After retiring this year as principal, he will start again in the fall as Mills Lawn’s school counselor while Linda Sikes is on sabbatical. He will continue to coach track, and plans to dust off his own running shoes and get back in the game — at the more senior level.

“We’ll put our canes down and put our wheelchairs away — let’s go!” he said. “I still got my spikes. I tell the kids if you don’t get away in the first five feet, I got you.”