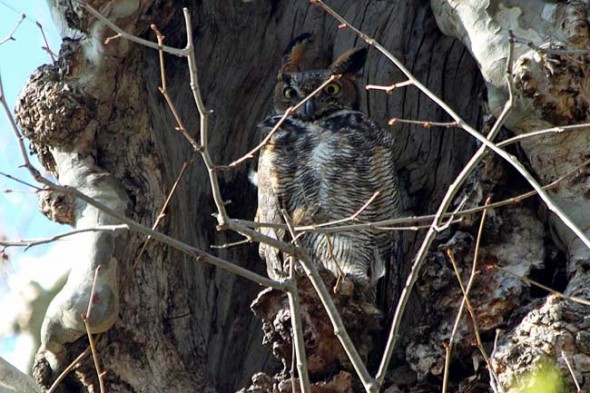 A great horned owl perched in the cavity of a sycamore along the river in the south Glen about two weeks ago, waiting like the mice it hunts for spring to warm all creatures out of their hovels. (photo by Patricia Perry)

Though the whipping, chilly wind didn’t feel like early May, the birds of Glen Helen puffed out their down and went ahead and sang anyway for the fourth annual Make It Count for the Birds fundraiser bird count on Saturday.

Relying on an intrepid group of over 40 enthusiasts with binoculars, the Glen documented an unofficial total of 80 species of birds throughout the preserve. That’s nine species fewer than last year’s count, according to Glen Helen Ecology Institute Director Nick Boutis, who was slightly disappointed but confident that the drop in count was largely a result of weather that would have dampened the sound of even the most vociferous cardinal screaming from the very lowest branch.

“That we did as well as we did is a testament to the number of talented birders who came out to help with the count,” he said. “When at 4:30 in the morning it’s not your alarm clock but the howling wind that wakes you up, 80 species is impressive.”

Birding largely by ear, groups and individuals trolled different parts of the Glen in hour shifts, beginning with the dawn chorus walk down by Grinnell Mill. One of the first chirps the 10 or so on that pass heard in the virtual dark was that of the oriole, whose brilliant orange plume hadn’t yet been lit by the sun, Boutis said.

By 10 a.m. another group happened onto a birder’s heaven at the Outdoor Education Center where the old stagecoach bridge crosses Birch Creek, where a mixed flock of everything from rose-breasted grosbeaks and vireos to five species of warblers created a cacophony of simultaneous chattering. Birders didn’t know where to look first for fear of missing the one that was about to fly away.

The birding day also turned up an entire flock of black vultures in a tree along the Little Miami. Last year’s bird count included one sighting of a black vulture, a species that typically lives further south but has been reported to be gradually expanding its range to the north.

“Even though it’s just one day a year, you do learn about the ecological changes that are happening,” Boutis said. “And it’s cool to see the scientific data playing out.”

Saturday’s birders also saw and heard the sweet song of the white throated sparrow, which goes, “Oh sweet Canada, Canada, Canada…” And even though the warbler species sightings were down from last year’s 22 to 14, according to Boutis, the worse than usual weather conditions made it difficult to draw any ecological conclusions from the weekend’s data.

On the positive side, the annual event is also a fundraiser for the Glen, whose goal was to raise $15,000 for everything from capital improvements to garlic mustard pulls and trail maintenance. The Glen has not yet counted the total funds raised, but with 200–250 sponsors, Boutis is certain that the Glen can count the event as a success.

Topics: , Make It Count for the Birds, ecological data