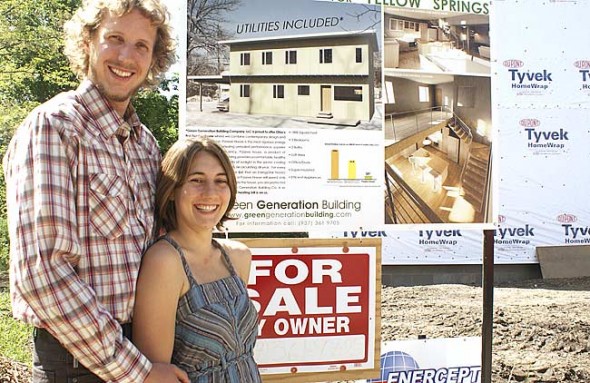 Andrew and Anisa Kline of Green Generation Building Company stand at the construction site of their Yellow Springs Passive House on Dayton Street, which will be completed in July. They hope their structure meets the rigorous energy efficiency standards of the Passive House.

Passive House is an active goal

Andrew Kline is already the youngest builder in Yellow Springs. But the 29-year-old general contractor also wants to be the greenest.

With his newly formed company, Green Generation Building, and the construction of his first energy-efficient home nearing completion, Kline is well on his way to establishing himself as a green builder.

If Kline and his co-designer, Alex Melamed, are successful with their project at 515 Dayton Street they will have built the most energy-efficient building in Ohio and the first that meets the rigorous standards of the Passive House, a German standard for extreme energy efficiency.
By burning fossil fuels, a building creates an enormous amount of pollution over the course of its 200-year lifespan, according to Kline.

“If we can build a house that only requires 10 percent of that energy,” he said, “it can have a dramatic impact.”

Kline, who has been building off and on for the last 15 years, became interested in environmentally-responsible building while an environmental studies major at Antioch College, from where he graduated in 2003.

“Antioch was the pivotable moment where I realized what’s happening in the world with respect to the environment,” Kline said. “That’s where I got the idea to mix an environmental ethic with our construction practices, to fuse an environmental consciousness with real-world, tangible, practical things that we use every day, like buildings.”

The first project of the Yellow Springs-based Green Generation Building Company, the Dayton Street house will showcase the firm’s goal of bringing green building into the mainstream. Its annual utility costs will range between $80 and $100 per year, Kline said.

At 1,800 square feet, the house has three bedrooms, an office and a loft in a contemporary design that may be ideal for a small family or young couple. Its energy-efficiency features include 14-inch thick super-insulated walls, an air-tight design, insulated floors and roof and large windows on the south-facing wall.

But what makes the house especially unique is what it doesn’t have: a furnace.
Because Passive Houses, being thick and tight, retain so much heat energy, they don’t require an external heating element, a concept Kline initially viewed with skepticism.

“I kind of blew it off as a ridiculous idea, because heating a house with nothing but your body heat, appliances and the sun didn’t seem possible,” Kline said. But after touring a local building renovated using Passive House techniques — a project of Pat Murphy, Faith Morgan and local builder Chris Glaser — and learning that there are some 20,000 Passive Houses in Europe, Kline was inspired.

“We don’t have space for the furnace in the design,” his wife and business partner, Anisa Kline, said. “That’s how confident we are that we’re going to achieve [the standard].”
Roi Qualls, Kline’s father-in-law, is his second business partner.

Going beyond conventional green building techniques is important to the Klines as well as design director and partner Melamed, who holds a masters in architecture.

“People tout using recycled materials, but I have been converted by the Passive House mentality, which is to make it as energy efficient as possible in operating energy use rather than in construction energy use,” Melamed said.

In contrast to many green buildings, Kline said of the project, “we’re trying to build it at a more affordable cost and not make something so customized and niched that only the very well-off could really afford it.” The house is being offered at $290,000, which includes most utility costs over the building’s lifetime, he said.

That the house is located in Yellow Springs makes it even more desirable, according to Melamed, because of the town’s heightened environmental awareness and its walkability.
“You can live here and not have to drive out,” he said.

Anisa Kline, who handles promotion for the company, agrees.
“People who want to come to Yellow Springs have an ethic about helping the world or helping other people,” she said. “They want to live in a more sustainable way.”

KIine’s family legacy in local building extends far back, to his late grandfather, John L. Kline, a local architect who designed Yellow Springs High School, among other public buildings and residences in the area.

“The designs were very environmentally aware,” Andrew Kline said of his grandfather’s approach. “But at that time the consciousness around energy use was not there.”

That’s why Kline feels it’s time for a new way of building. “We’re trying to build the next generation of construction differently from how it’s been done before,” he said.

Tours of the house, which will be completed in July, will be held during Street Fair on Saturday, June 12, from 12 p.m. to 5 p.m., or by appointment.

Kline plans on getting his masters in architecture and looks forward to future local building projects for his company in both new construction and renovation, especially those that are green.
As he sees it, “Once you know you can do something reasonably economically that makes such a huge impact on the environment, how can you possibly go back to just building a very non-environmentally sound structure?”

2 Responses to “Passive House is an active goal”