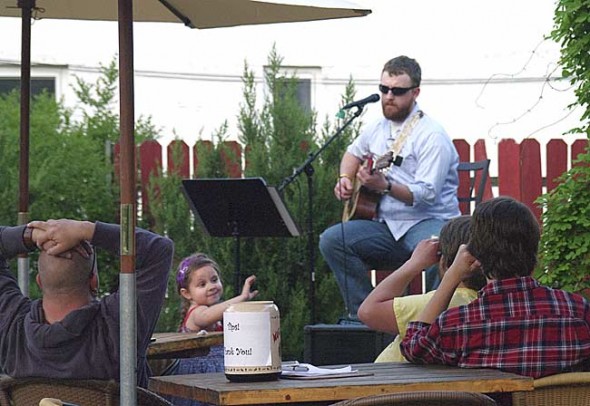 Dustin Vincent performed last Friday at the Corner Cone. The ice cream business will feature musicians on the patio on Friday evenings.

The Corner Cone will serve up more than just ice cream and hot dogs this year. Every Friday evening until the end of its season in October it plans to offer a live music performance, and in August it will make its foray into theater with an event co-owner Bob Swaney is calling the “Soft Serve Playhouse 10-Minute Play Festival.”

The Corner Cone has featured a variety of music events since it came under its current ownership in 2006, Swaney said in a recent interview. For a while the business hosted a “no-mic night,” which was an open-mic night without amplification.

“Since the beginning, we’ve always had some kind of jam session,” said co-owner Jennifer Foley, who is in charge of booking. “Our patio’s always open to anyone who wants to come play. This year we’ve focused on scheduling people; when it’s scheduled you can get more community involvement. People know there’s going to be music on Friday evenings.”

Corner Cone owners have booked artists through the June Street Fair, and Foley hopes musicians will contact the Corner Cone to schedule performances beyond that.

Musicians don’t get paid, but they do get a free dinner, a chance to pass the hat, and an opportunity to promote and sell albums they have recorded. Since she placed an ad seeking performers on Craigslist a few weeks ago, attracting talent has not been a problem, said Foley.

“There’s a lot of musicians who just want to get their name out there and aren’t so worried about getting paying gigs,” she said.

This year local singer-songwriter Jonathan Hamilton opened the season on April 9. Last Friday, area musician Dustin Vincent performed. A newly constructed platform on the building’s west side serves as a convenient stage for the music events.

When Vincent plays, his family often turns out to watch him, said Foley. Having music at a location like the Corner Cone means children and teenagers who are excluded from the bar scene can enjoy the music too, she said, and she hopes the performances can mean more involvement for kids. Even if business is already good, providing the music is worthwhile if it gives customers “a little added something,” Foley said, and the performances are memorable for people who haven’t been to the Corner Cone before.

Swaney thinks the music is definitely a draw for patrons, and the music also serves the purpose of enlivening business in an integral part of downtown that doesn’t always get as much foot traffic as Xenia Avenue.

“If they didn’t drive in on Dayton Street, they don’t know it exists. We’re also clear on the end of things for Street Fair. What we’re really trying to do is keep the action both nights, Friday and Saturday, to keep things alive on this part of the street,” said Swaney.

Efforts to draw more attention to Dayton Street, he said, also led to the formation of the Dayton Street Arts District and the planning of an event organizers have dubbed the Cirque Carnaval, to be held during Chautauqua Week and the Friday Fling on July 16, from 5 p.m. to 10 p.m. The event will feature artists exhibiting and selling their work as well as two music stages, another for spoken-word and a dance performance area. The intersection of Dayton and Corry streets will be closed; Chen’s and William’s will provide food, and performances will come from three separate stages: one for amplified music, one for acoustic music and one for spoken word art. While some artists are already committed to the event, Swaney said, booths are still available.

He and collaborator Rani Deighe Crowe are also at work on a project that ties into both of their long-term interests, but that is a new adventure for the Corner Cone: a one-day theater festival featuring a selection of plays 10 minutes in length. The festival is scheduled for Saturday, August 14 and will run all day, with a set of performances in the morning followed by a repeat in the evening.

The August date was chosen so as not to overlap with the Yellow Springs Kids Playhouse’s summer production in July, Swaney said. The timing may not be ideal because some people will be gone for vacation and the weather will be hot, but he still thought the event could be successful. (August is also a popular time of year for eating ice cream.)

Swaney participated in theater in high school and college as well as community productions, sometimes acting and sometimes working on lighting and set design. While it was his idea to hold the Soft Serve Festival, and he is providing the space and the funding, Crowe is in charge of planning and coordinating the event. Crowe graduated from Antioch College in 2001 with a degree in theater, and her experience in her field includes performing stand-up comedy in New York and creating and participating in numerous theater projects since she moved to the area to attend Antioch. She recently directed a production of Peter Pan at the Dayton Jewish Community Center, and in February she produced a staging of the play The Vagina Monologues at the Therapy Cafe in Dayton. Last year Crowe also organized readings by nearly 60 Dayton-area actors of poems from Edgar Lee Masters’ Spoon River Anthology for an installment in local artist Migiwa Orimo’s Telephone Booth Project. The booth is located on the west edge of the Corner Cone’s property at Dayton and Walnut Streets.

“We might change the format if we get tons of really amazing plays that we want to show and we want to feature,” she said.

Crowe has received five submissions since she started advertising a couple of weeks ago. Several are from local people and one was from as far away as Boston. Unlike many theater festivals where a play might be written by one person or group and performed by an unrelated set of actors, Crowe says the general idea at the Soft Serve Festival is that the writers will also produce the play.

But, “If I have very many that are good, I may look at having local authors do dramatic readings” so such pieces could still be included, she said.

Crowe has been forwarding the pieces to a selection committee she appointed to select the best plays for the festival. The committee is composed of several members of the local performing arts community. Diverse themes are welcomed, but Crowe said they wanted to make sure pieces were suitable “for a family audience.” (Swaney didn’t think there were any inappropriate themes, except maybe one about a rival ice cream business or “bad ice cream.”)

As an extra incentive to performers, a panel of judges will award four prizes at the festival: one for the best play by someone 18 or younger, one for best drama, one for best comedy, and one for most popular. There is a $100 prize for each.

The deadline for submissions is June 1, but Crowe said she’s considering extending it by a couple of weeks to give high school students time to submit work after school is out. Youth participation is an important aspect of the festival, she believes, and as a substitute teacher, she has had the opportunity to work with students in several area schools on theater projects.

“I just see such a need for kids to think outside the school. Students are wrapped up in everything about status in school, their test scores…they don’t think about engaging in the community. The idea is to give anything they do [artistically] intention,” said Crowe.

There is no submission fee, and a proposal doesn’t necessarily have to be in the form of a finished piece.

“Being from Antioch I realize there are different ways to do a play,” said Crowe.

Swaney says he does not mind if people don’t stay to watch all of the performances.

“The whole point of a 10-minute play is speaking to the fact that it’s a fast world. For an outdoor area with traffic, for people to sit down and watch a little theater is a good thing,” he said. He added that he thinks of the 10-minute length as a “poetic structure — the theatrical equivalent of a haiku or a sonnet.” He says he himself enjoys attending plays but is often in bed early on Fridays and Saturdays and therefore sometimes misses out on theater, “but that doesn’t mean I wouldn’t like to see some actors in front of me.”

The event will be successful, he said, if he and Crowe receive a good number of high-quality submissions; he is not as concerned with how much extra business it generates.

“I’m not interested in measuring it in ice cream cones,” he said. Swaney will also know the festival went well if it generates at least one “theatrical moment — one where you’re taken away. The kind that [lets] you forget about who you are and where you are, step into someone else’s shoes and see the world through somebody else’s eyes.”

Those interested in participating in a dramatic reading of one of the scripts, or who would like to submit a play idea, should e-mail Crowe at karani1100@yahoo.com and mention “10-minute play festival” in the subject line. Other ideas are welcome too.

“There might be help we didn’t think of yet that we could use,” said Crowe.