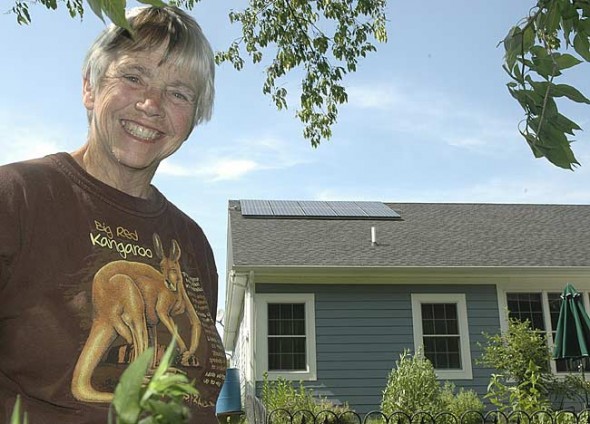 On her roof on Stewart Drive, Pat Brown’s 10 new solar panels convert the sun’s rays into electricity and send it to the Yellow Springs electric grid. She is the first Yellow Springs resident to install grid-tied solar photovoltaic panels. (Photo by Megan Bachman)

A solar pioneer, paving the way

Thirty years ago, Pat Brown was arrested while marching for peace. Now she finds herself again on the front lines — this time of an alternative energy revolution — as the first resident in Yellow Springs to install grid-tied solar photovoltaic panels.

In working with Greene County officials, Brown cleared the way for local residents to follow in her footsteps and now proposes a loan program to Village Council so others can more easily install renewable energy systems in their Yellow Springs homes.

“As I became more aware of climate change, I realized that we needed to do something,” Brown said. “I’m the kind of person that says, you can’t change the world, but you can change yourself.”

On Brown’s roof on Stewart Drive, 10 solar panels convert the sun’s energy into electricity that is either used by her household or delivered to the Yellow Springs electric grid. On a sunny day in late May, the system produced 1119 watts, causing Brown’s electricity meter to spin backwards. If she produces more than she uses in a month, the utility gives her electricity credits, a scheme called “net metering.”

“You get paid for as much as you generate, but you probably won’t produce as much as you use,” Brown explained. However, with net metering Brown can supply the grid with energy she’s not using, perhaps on a sunny day, or draw from the grid at night when her panels aren’t producing.

After nearly a year of bureaucratic hurdles, Brown’s system became operational two weeks ago. Hers is one of only a handful of buildings in Greene County contributing alternative energy to the grid, and while a solar array at Mills Lawn elementary school in Yellow Springs has been connected to the grid since 1998, no previous residence within the Yellow Springs municipal electric system has installed a grid-tied system, according to Kelly Fox, superintendent of electricity and water distribution for the Village.

“I paved the way so that if anyone wants to do it, it shouldn’t be as difficult,” Brown said.

The 69-year-old former nun, teacher and peace activist moved to Yellow Springs two years ago with her husband, Joe, a retired junior high school teacher who now resides at the Friends Care Center. Because the Michigan natives wanted to live in the most energy-efficient home possible, they built a 1,600-square-foot house in the Birch III development that features thick insulation, south-facing windows, energy-efficient appliances and a geothermal heat pump for heating and cooling. They also use rain barrels for watering flowers and compost tumblers to recycle kitchen waste.

“I did what I thought I could do and I can’t think of anything else,” Brown said of her energy conservation activities.

Last year the Browns used their savings to install 10 solar panels, which they purchased online for $25,000. Taking advantage of a federal tax credit for renewable energy, the Browns will get a third of the money back immediately.

After finding a firm to install the panels, Greens Solar Solutions, a new company based in London, Ohio, they approached the Village for permission to connect their solar panels to the Yellow Springs electric grid. According to a state law, any municipality with 5,000 people or less isn’t required to allow net metering, Brown said. However, the Village has had a net metering ordinance on the books since 1999 and is currently amending it to allow for neighborhood-scale projects and renewable energy sources beyond wind and solar.

“We’re expecting to get a lot more [solar installations],” said Fox, the electricity superintendent. “She was kind of the guinea pig and it should go a lot smoother next time.” The Village, as the municipal utility company, ordered the net meter and ensured the system was installed safety and working correctly within the town’s electric grid.

“We welcomed it — we didn’t try to discourage her,” Fox said. “The Village is about energy efficiency, conservation, being green, reducing its carbon footprint and we want the residents to do the same.”

Brown estimates that her 2-kilowatt solar array will provide for about one-third of her household energy usage. By installing 15 more panels, which Brown hopes to do, and using a natural gas furnace to supplement her geothermal system on exceptionally cold days, 100 percent of Brown’s electricity usage could be met with renewables.

“The sun is where we need to get our electricity — it’s our future,” Brecha said. “The other advantage of solar is that it’s generated locally and you don’t lose energy over transmission.”

Brown will now approach the Yellow Springs Energy Task Force to advocate that Village Council consider a Village-level energy revolving-loan fund. Under a program called Property Assessed Clean Energy Financing, or PACE, property owners can borrow money from their local government to purchase renewable energy systems, which they pay back over time with interest as a special assessment on their property taxes. If their property is sold, the repayment becomes the responsibility of the next owner.

Last year the Ohio General Assembly passed PACE legislation to join 17 other states with similar programs. Just last week a new bill passed the state legislature to expand the program to include energy-efficiency upgrades as well.

“If the Village is trying to go green and get efficient, this could be a good thing,” Brown said. “The hardest part is to come up with the money.”

Residents receive a lower interest rate and the upfront cost for their projects. Local governments have their administrative expenses paid for through bonds and the interest received from participants. According to Brown, these SIDs, or special improvement districts, can be set up to lend the money at the municipal or county level.

Brown said that in addition to residences, businesses, churches and schools, Village government could also participate in the program.

Brecha agreed, saying that the Village should look at installing solar panels, perhaps in partnership with a solar company. “There are companies that will rent roof space. [The Village could] put them on the roof and maintain positive cash flow,” he said.

In the meantime, Brown reaps the rewards of her rooftop solar array in the form of lowered utility bills. And the community benefits by Brown’s pioneering efforts and plans to help others.

“It’s part of being socially responsible for our world,” Brown said. “Whether the motivation is economics or energy efficiency, that doesn’t matter.”