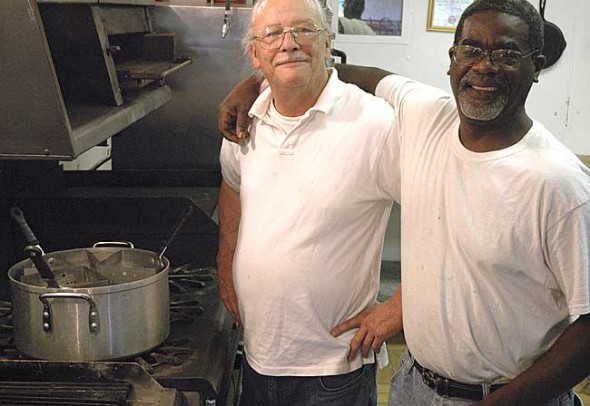 CJ’s to cook up ‘Bama food

If you’ve traveled along the south end of Xenia Avenue recently, you may have noticed the banner hanging from the former Kentucky Fried Chicken building: “CJ’s Southern Cooking Coming Soon.”

The “C” in “CJ’s” is contributed by Carl Moore, and the “J” by Jim Zehner. The two longtime villagers hope that the restaurant will bring a new range of flavors and textures to the Yellow Springs palate. They hope to open on Sunday, June 27.

“There was a demand for some home cooking or Southern cooking — you can’t get too much fried fish, fried chicken,” or other types of regional specialties, Moore said in a recent interview at the soon-to-be CJ’s Southern Cooking at 1535 Xenia Avenue.

When they purchased the building in March, “it was dirty…(though) not in bad shape. I had to put in some equipment in the kitchen…we did lots of cleaning,” said Moore. They also put in new gas lines. It had been empty for around two years, “long enough for codes to change,” said Moore. After working with inspectors, progress slowed down, he said, adding that the inspectors “have been extremely helpful” in the time-intensive process.

Some are under the false impression that the Kentucky Fried Chicken restaurant which previously occupied the space was shut down for violations of health codes, Moore said, but in fact, the owner held several franchises that “they wanted to bring it up to code with the rest of the KFCs,” and instead he decided to close that location.

For Moore, opening CJ’s is the realization of a longtime dream.

“It’s something I’ve always wanted, my own restaurant,” he said.

A professionally trained chef with “about 28 years experience,” Moore is currently finishing an associate’s degree in culinary arts at Sinclair Community College. His formal training is in French cuisine, but he also has a deep passion for and thorough knowledge of Southern cooking. Though he was born in Cincinnati, Moore’s family comes from Alabama; he grew up eating “what we called ’Bama Food,” he said. He will prepare the dishes at CJ’s from recipes of his and his mother’s.

While Moore concentrates on food, Zehner will be out front with the customers.

A resident of Yellow Springs since 1968, Zehner has been a high school history teacher in Xenia, an Ohio state representative (1976–1982) and for many years, a familiar face at the License Bureau in Xenia, from which he recently retired.

“I’m probably the most recognized person in Greene County,” he said. “People are always asking, “Where do I know you from?”

While CJ’s Southern Cooking is located in a former KFC, “we are not fast food,” Zehner said. Instead, they will be serving “stick-to-your-ribs, solid food.”

Their working menu promises a well-rounded selection of food. At breakfast the options include “quiche and fresh fruit of the day,” a salmon patty with gravy and grits, cream chip beef and a fried bologna sandwich. At lunch CJ’s will offer quick options such as gumbos and chowders, as well as chilled soups in summer, in addition to deli-style beef, pork and turkey sandwiches. Fried fish and fried chicken will be staples, and side-dish options include collard, mustard and turnip greens. For dessert, patrons can choose a slice of peach cobbler, sweet potato pie or pound cake, among other things.

There will be something for everybody, Moore said, and notes that he is happy to consider special orders.

“If somebody wants chicken Kiev, I’d be happy to mix up a big batch and have it for the week,” said Moore. A few French dishes might work their way into the menu as well (Moore notes that French cooking largely shares Southern cuisine’s penchant for heartiness).

Those who enjoy meat will find a variety of options to choose from at CJ’s.

“Even with pigs’ feet, hog maws and chitlins, there’s people here that eat that — that’s a seasonal thing,” said Moore, who notes that these are traditionally winter foods. “I can’t wait to get that smell going through Yellow Springs,” he said.

Yet vegetarians are looked after, too. Moore and Zehner will offer ratatouille, a grilled veggie sandwich, red beans and rice and baked beans, in addition to the cooked greens and other options.

“I’m open to suggestions as far as the vegetarians go — and the vegans,” said Moore.

Affordability is an aspect of what Moore and Zehner aim to achieve at CJ’s.

“We hope it doesn’t break us, but we do hope it brings in more people and families with kids who can come and get a decent meal” for a reasonable price, said Moore.

Moore also plans to cook with fresh ingredients as much as possible.

“I just planted some tomatoes, oregano and squash out back,” he said. He is also growing collard greens, and a friend is growing mustard greens. Moore said they also welcome community members to bring them suitable produce to potentially sell to the restaurant.

They plan to open with a staff of five and eventually add a few more employees. “We think once it gets going, there’s going to be work,” said Moore.

Moore isn’t too worried about villagers closer in to the center of town who think the restaurant’s location is a little far removed.

“I think once they eat our food, they won’t hesitate to ride their bikes or walk or get a ride,” he said. Zehner noted that, “By the same token, for people at Dollar General and YSI, town is ‘all the way in there.’”

“At some point we’ll be making deliveries to all the local folks who can’t get out” to CJ’s, said Moore. Passersby on Route 68 represent another potential source of customers. Anyone who’s in a hurry can pass through the drive-in, from which many of the dishes served in the restaurant will be available for order.

The two also welcome potential investors in CJ’s Southern Cooking to contact them at 767-1952.