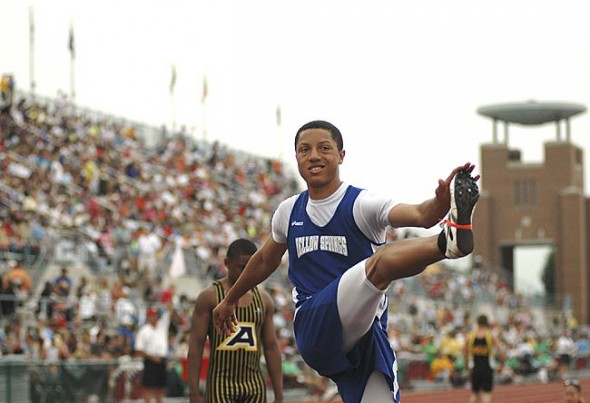 Chris Johnson was one of four members of the YSHS track team who competed in the state championships at The Ohio State University on Saturday, June 5. He is shown here doing a leg kick in preparation for the 4x200 relay. (Photo by Nick Dudukovich)

This could be the start of something good.

Of the four competitors from the YSHS boys track and field team who competed at the Ohio High School Athletic Association track and field championships on June 5 in Columbus, three will return to compete on the squad next year.

Mario Cosey, who will be a senior next year, raced to a fifth-place finish in the 100-meter dash, with a time of 11.27 seconds. Senior Nick Melone, of Columbiana High School, won the race with a time of 11.02 seconds.

“I thought I did the best I could,” Cosey said after the race.

Cosey made it a personal quest to compete in the state championships this year, held at the Jesse Owens Memorial Stadium on the campus of The Ohio State University.

“Mario set forth a goal at the conclusion of last year to make the state finals in the 100 and is driven to be the best,” boys track coach John Gudgel said.

Cosey, who also runs on the 4×200-meter relay team, should be a favorite to return to the state championships next year, based on his 2010 performance. To improve his time, Cosey said he will continue to work out after the fall soccer season, as well as run on an indoor track during the winter. Next spring, Cosey will be joined by fellow relay teammates Logan Norris-Sayres and Josh Meadows, as the Bulldogs try and build on this year’s eighth-place showing.

During the finals, the boys experienced difficulties handing off the baton. The errors resulted in a race time of 1 minute, 31.96 seconds. Cosey also had to regroup from running in the 100, which was held just 10 minutes before the relay. Despite the short rest, Cosey didn’t use the race schedule as an excuse.

“I usually run four races in an event, so I’m used to it by now,” he said.

Archbold High School won the 4×200 with a time of 1 minute, 28.49 seconds. Despite the mishap, Norris-Sayres and Meadows enjoyed the experience. 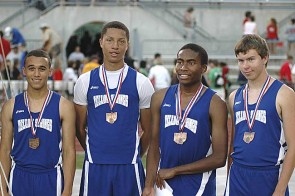 The Yellow Springs High School 4x200 relay team of, from left, Logan Norris-Sayres, Chris Johnson, Mario Cosey and Josh Meadows, earned medals for their eighth-place performance in the Div. III state meet at Ohio State over the weekend. Cosey also received a medal for finishing fifth in the 100 dash. (Photo by Nick Dudukovich)

“It was an amazing experience to come to states as a sophomore,” Norris-Sayres said. “It’s pretty hard for sophomores to get up here.”

Meadows welcomed the opportunity to compete in the championships, especially since he was so close to doing so last year.

“It felt good to run in states. I made it to regional finals in the 4×400-meter relay last year and we didn’t make it [to the state meet], so this is my first time here,” Meadows said. “It’s nice to make it here. Not the result we wanted, but it’s good to be here.”

Meadows split time this season rotating with senior Will Rippley in the relay. The team chose Meadows for the state championships because of his history of running in various events.

“Josh was selected as the fourth runner on the relay because of the versatility that he provides as a runner in being able to run a variety of races and distances,” Gudgel said.

The relay was the last race that senior Chris Johnson would run for the Bulldogs. Johnson, who didn’t run for the Bulldogs during his freshman or sophomore year, had a solid season for Yellow Springs. Besides running in the state championships, Johnson improved on his long-jumping skills and earned a spot at the regional meet last month.

Gudgel appreciated the chance to coach and watch Johnson come into his own. “[Chris] established himself as a real track talent and a valuable contributor to our track program,” Gudgel said. “I am extremely happy and proud of Chris as providing leadership to our team and having the chance to participate at the state track meet.”

Gudgel also valued the effort of all the Bulldog athletes who competed at the finals.

“These four young men were a joy and pleasure to work with, and they always gave a maximum effort,” he said.

While he didn’t give any predictions, Gudgel did provide some insight into what the Bulldogs will do to send some athletes back to Columbus in 2011.

“We look forward to next year with our returning runners and feel that we will improve upon our performance from this past weekend,” he said. “During the off season we will work on our areas of weaknesses.”

One Response to “Cosey takes fifth at state”