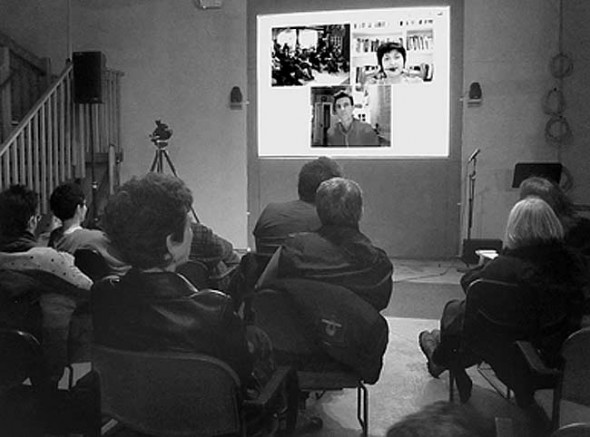 In March Nonstop presented Ashley Dawson of the City University of New York and Malini Schueller of the University of Florida who, via video teleconference, interacted with audience members in the Nonstop series on higher education. (Submitted photo by Migiwa Orimo)

Never ones to be constrained by conventional thinking, members of Nonstop Institute are taking an unusual approach to bringing interesting thinkers to Yellow Springs. In their series of talks this spring on higher education, Nonstop used high-tech but low-cost methods to create dialogue between members of the community and some of the most provocative thinkers in the nation.

This method differs in several ways from the more customary approach of a passive audience listening to a talking head. The Nonstop series, via Skype and iChat, electronically connected the experts, who were sitting in their homes and offices around the country, with the discussion participants in Yellow Springs. The guest speakers, who generally give about a 20-minute introduction before an hour-long interactive discussion with audience members, seemed eager to engage, according to Nonstop member Dan Reyes, an organizer of the event with Iveta Jusova.

“I sense that they’re excited about being taken off the beaten path” for the events, Reyes said in an interview last week.

Nonstop will this month bring via teleconference its most well known guest yet, the political philosopher and activist Michael Hardt of Duke University. Hardt is the author, with Antonio Negri, of a trilogy of influential works on the political and cultural landscape, Empire, The Multitude and The Commonwealth.

The event takes place at 7 p.m. on Thursday, June 17, at the Nonstop campus in Millworks, 305 North Walnut Street. It is free and open to the public.

Published in 2000, Empire was a publishing blockbuster that went through 10 printings, unusual even for a commercial book, but unheard-of for a 500-page academic tome published by the Harvard University Press.

“How often can it happen that a book is swept off the shelves until you can’t find a copy in New York for love nor money?…Empire is a sweeping history of humanist philsophy, Marxism and modernity that propels itself to a grand political conclusion: that we are a creative and enlightened species, and that our history is that of humanity’s progress towards the seizure of power from those who exploit it,” according to Ed Vulliamy of The Observer. Emily Eaken, reviewer of the New York Times, wrote that the book “is filling a void in the humanties.”

Hardt and Negri’s thesis is that the modern influences of technology, globalization and new models of production are breaking down barriers both within and between individuals, leading to new political and cultural opportunities. On a global level, they believe, formerly dominant nation-states are losing power and unorganized masses of people, which they call “the multitude,” are gaining it. Overall, they see the trend as empowering for individuals and for democracy.

“They see the old boundaries breaking down as both a time of crisis and a chance to rethink the culture,” Reyes said. “Hardt has food for thought for us, regarding how to move forward into a new realm of possibilities.”

Hardt’s analysis covers culture as a whole, and the upcoming dialogue will consequently cover broader territory than the previous discussions that focused on higher education, Reyes said. However, the Hardt event will, like the earlier events, encourage participants to re-consider the status quo and open up to new paradigms.

“When this works, it has a great impact,” said Nonstop member Brian Springer, regarding the Nonstop dialogues. “If it’s really good, it can change your intellectual spirit.”

While organizers were somewhat surprised that someone of Hardt’s stature agreed to take part in an event sponsored by a tiny group in a tiny town, they feel his acceptance has to do with his being intrigued by Nonstop. All of the participants, including Hardt, waived charging a fee to Nonstop after hearing about the group and its mission.

“We’re interesting to him because he’s interested in institutions that are in the process of becoming, that are thinking outside the old playbooks,” Springer said.

No one could accuse Nonstop of not thinking outside the playbook. Formerly called Nonstop Antioch, the group of about 20 working and board members are mainly former faculty of Antioch College. When Antioch University shut down the college in 2008, Nonstop members organized classes without a campus, with the former faculty teaching in churches and homes, and reaching out into the community. They did so out of a desire to carry on the traditions and values of Antioch College, several said at the time.

Part of the Nonstop members’ decision to focus their spring dialogue series on higher education was their desire to understand the forces that led to the college closure, according to Springer, who believes that while the Antioch closing was an extreme and unusual manifestation of the threat to higher education, the same forces threaten many institutions today. Speakers in the series included Cary Nelson, an Antioch College alumnus and president of the American Association of University Professors, or AAUP, Ashley Dawson of the City University of New York, who spoke about her research into threats to academic freedom, and Sheila Slaughter of the University of Georgia, who discussed the effects of economic forces on higher education.

The series was “an attempt to understand how cultural forces created the conditions that led to such a catastrophe” as the Antioch College closing, Springer said.

While some of the original Nonstop members are now working at the revived Antioch College, the college’s new staff is small, and everyone could not be rehired — many of the former college faculty remain at Nonstop, Springer said. The effects of the decision to close the college are still reverberating, including that many of the former college faculty are about to lose their unemployment compensation, he said.

While Nonstop was originally funded by Antioch College alumni, it is now totally funded — its estimated 2010 budget is about $30,000 — by grants, gifts and supporting memberships, according to Springer, and its all-volunteer staff donates about $300,000 in donated labor yearly.

While Nonstop members are encouraged that the college alumni successfully reclaimed the college, they believe that they still fill a significant role in the community. Because they are mainly former longtime academics, they have a wealth of interests and expertise, and they want to continue making contributions to the Yellow Springs community.

“I see Nonstop as a complement to the revitalized college and to the humanities department at McGregor,” Springer said. Because the group is small, “it has more mobility to move and change” than do traditional institutions.

“We’ve become a flexible set of intellectual resources,” he said.

Nonstop members believe that the Yellow Springs community is an excellent place to apply those resources.

“This is an interested place. It’s vibrant and the people are curious,” Reyes said. “It’s not hard to have conversations here about topics that might be difficult somewhere else.”