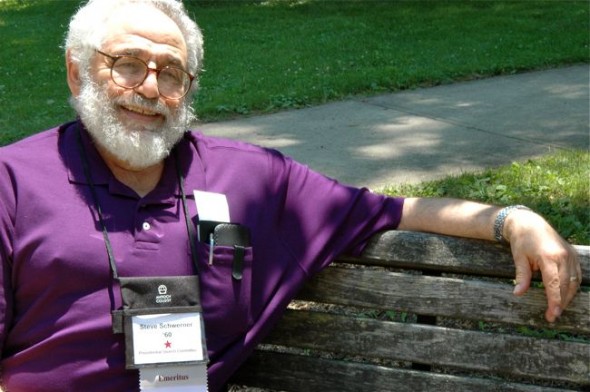 Steve Schwerner, a former Antioch College student, professor and dean of students was given the J.D. Dawson Award at this year's alumni reunion for his years of service at the college. (Photo by Megan Bachman)

Former Antioch professor and dean of students Steve Schwerner received the J.D. Dawson award at this year’s alumni reunion for his decades of service to the college.

Schwener served as dean of students from 1976 to 1991 and as a professor from 1991 to 2003. He taught courses in education, psychology, jazz history and on the civil rights movement, which he participated in while an Antioch student in the late 1950s.

“He’s been an advocate for kids, for struggling students and for people of color,” alumni board member and former roommate Ed Goldson said of Schwerner’s tenure during an awards ceremony on Friday.

The award, named after former dean of students and director of cooperative education J.D. Dawson, is given each year to an alumni or friend of the college who has made a signifiant contribution. Former Antioch professor and Yellow Springs resident Al Denman was also to receive a J.D. Dawson award at this year’s reunion.

Schwerner, a 32-year resident of Yellow Springs and former Yellow Springs Village Council member, was honored to receive the award, presented by the alumni board.

“Antioch was my life for a long period of time,” Schwerner said in an interview. “The students made the place exciting — they are a remarkable group.”

Schwerner, who has served on the alumni board and the Antioch College Continuation Corporation, continues to contribute to Antioch as a member of the Presidential Search Committee.

At the ceremony, Schwerner reflected on his days at Antioch — picketing a bowling alley in Xenia during desegregation, hosting a local jazz radio show and being changed by his co-op experience. He also spoke on Antioch’s unique educational approach and prospects for the future.

“The co-op program, the notion of social justice, student involvement in decision-making  are part of the curriculum -— they are not add-ons,” he said. “All of these things are what makes it an Antioch education.”

Schwerner described the alumni as “the single most important asset the college has,” and added that he was encouraged alumni continue to support the college while allowing the administration to direct programming.

Referencing Arthur Morgan’s revival of Antioch, Schwerner said, to roaring applause from fellow alumni, “the next five years has the potential to be the golden years all over again.”