As you may know from my previous post or from seeing me then not seeing me then seeing me again on the streets, I recently returned from my yearly trip to Ireland. Here is an illustrated, partial reflection of my visit that I feel the need to get out there before returning properly to gad about Yellow Springs. Click on a photo to see a bigger one. All photos by me unless otherwise noted. 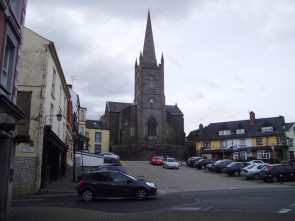 My friend Paul says Ireland is not all like this—the town, Clones, built around the church on a hill to dominate the land for miles. (It’s the highest diamond, or town center, in Ireland I’ve been told.) He grew up in the suburbs. From here I can see both spires, one Catholic, one Protestant, one on either side of the town, barely a mile from the capital-B border. 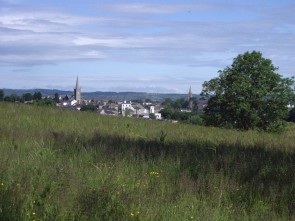 Someone told me that the land here looked so northern to them, lines of pines bordering green fields. That his association with that landscape was to imagine the bloodshed, the battles, the British soldiers storming through those trees… 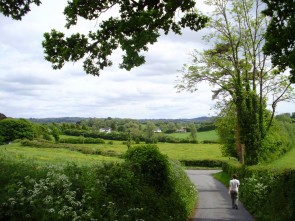 As an outsider I look at this land and see what I want, unsoiled by anything other than an intellectual awareness of its history. I think it’s tragic to see this beauty and think of war. But without one, could there be another? Is it because of one that we have the other? The oldest question in the book. 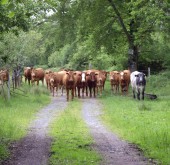 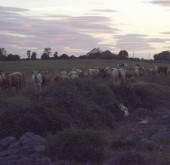 On two occasions I was in a group that was chased by cows. One was on the grounds of a dilapidated castle in County Fermanagh, Northern Ireland. The other was in a field in County Galway. These photos were taken once I knew we were safe, over the fence or stone wall, with them still staring us down. 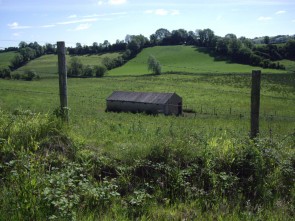 There’s not a soul around as far as I can see, and I can see very far. Kept walking till the beaten path became considerably less beaten. A crumbling stone wall covering a massive scrap heap, an abandoned barn just behind. Sectioned off, forgotten; rural decay. Rural Irish decay; history commingling so easily with recent past and present. The time lapse becomes blurry.

As it turns out, it was not so abandoned. I was there barely an hour before someone drove by and recognized me from a photo on Facebook with a mutual friend who’s a local. “Is your name Vanessa?” Clones is worse than Yellow Springs… 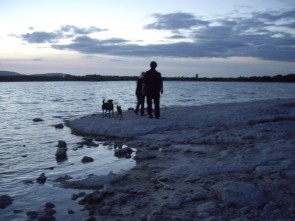 The evenings are chilly but they say it’s warm. Swimming with new friends in limestoney Lough Buinne, near Kinvara, in County Clare. The mud in the water nothing I’d ever felt before, the water warmer than the air—not saying a whole lot. It never got deep and I could always see the bottom, clay-colored; it threatened to suck me down with every foot-fall, with every foot-rise releasing cloudy mud into the water making it temporarily opaque. 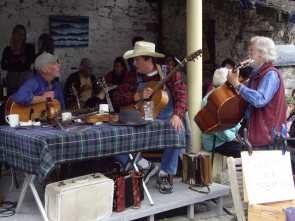 The Kinvara farmers market in County Galway is my new favorite, I do believe. In addition to the vendors, the music, cafe and prepared foods (“tea, coffee, & other nice things”), and tables and chairs made it almost fair-like. Granted, money-exchange for goods was first but it wasn’t last, or maybe it was also last but not middle. Very communal—“Got an Irish coffee there?” one man said as he passed and tapped my cup of lemon-ginger tea. “Ha I wish.” 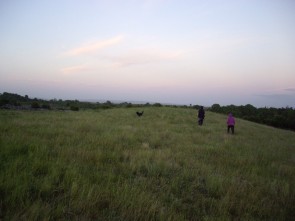 5 Responses to “BLOG – This year’s Ireland”