BLOG – Off to Ireland again…

This blog is titled “Gadding About Yellow Springs” but it should come as no surprise to you that I gad about other places, as well—that being the nature of gadding. One can only gad about Yellow Springs for so long before coming to a halt at the village limits. 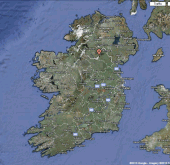 Clones, County Monaghan, Ireland (marked with an 'A') - a satellite image from Google Maps

So come let us meander to a land of melody, mirth, meadow, and mist: It can only be Ireland. If you start in Dublin, as most people who fly in do, travel 2 hours north and a bit west and you’ll hit Clones (originally “Cluain Eois” in Irish so pronounced “clone-es”). Clones is a town in County Monaghan, population 2,889 at the 2006 census. 7 kilometers away is the village of Scotshouse, which according to the locals has a population of 150, maybe 200. In between Clones and Scotshouse is Hilton Park, an estate on which the 8th, 9th, and 10th generations of the Madden family live.

Every year Hilton Park is host to the Flat Lake Literary & Arts Festival, organized and hosted by writer Pat McCabe and actor/director/producer Kevin Allen. This festival brings together artists and spectators of all types for a weekend of creativity, camping, and drinking in the very green fields of rainy rural Ireland.

Later this week my friend Lee and I will leave for Ireland. It will be my third year going out there to volunteer for the Flat Lake festival. (It will be Lee’s first!) I am greatly looking forward to once again breathing that fresh, country air; gazing out at those green, green fields; enjoying the company of the friends I’ve made the last two years; and drinking really, really good Guinness. Not to mention the great food, work, art, and inspiration.

Some reflections from the first year

Remember how I said Boston was so Irish? Well, Ireland is way more Irish. Boston’s got nothing on Ireland in terms of Irishness.

I wish I could take pictures of how the air feels on my skin in my mouth and lungs, or how the earth feels on my feet.

Irish-language radio station.
Conrad (Australian): “You getting all that?”
Me: “Oh yeah, every word.”
Conrad: “Even when they’re talking English it’s just as hard.”

I got a bit lost in the country. I blame Jonathan’s directions which had “green field” as a landmark.

In Scotshouse there are 3 shops. In Clones there are—according to David—2 churches, 20 pubs, and 1 of everything else.

Chrissie took me to Enniskillen (in Northern Ireland) and showed me sights on the way. The police stations are barricaded with huge steel columns from about four feet up to the top and cops still on standard wear bullet-proof vests and pack crazy heat. Also, they’re police in the north because it’s UK but “the guards” (garda) in Ireland from the Irish “garda síochána” meaning “civic guard”.

Sometimes, early in the morning, the cows sound like the T-Rex from Jurassic Park.

Bernie: “We drink tea like water.”
Me: “That is the equivalent isn’t it. I was trying to figure that out. I think you drink more tea than we drink liquid.”
Bernie: “The aul ones are the worst. I’ve an uncle who will drink only tea. It wouldn’t occur to him to drink anything else.”
Me: “What if he wants a cold drink?”
Bernie: “He doesn’t want a cold drink.”

Some reflections from the second year

A guy started chatting me up. I can’t remember his name and I shouldn’t say it, anyway. He told me to forget everything he told me, stories of being in the IRA during the Troubles and how he’d been gone 22 years, just got back, and was still acknowledged as a member. Scary, he said, but they take care of you, like a gang, like gangsters in America. You can’t ever really escape but there are perks, like yesterday he was pulled over in Cavan and they frisked him, they went through all his stuff until they found a certain card they stopped and apologized and said it’d never happen again, the only reason it did was because they didn’t recognize him in those parts. He showed me the Sinn Fein membership card, told me about conversations with Gerry Adams and Martin McGuinness, how he knew exactly who was involved in the cop shooting a few months ago in Armagh, that Ireland was never really going to change, that all the politics were bull, and he knew a lot of it was just ignorance but a part of him didn’t want it to change. He confessed and apparently only to me and eventually to a priest—that when his wife died of cancer last year he felt like he wanted the Troubles to start again. He didn’t really, but that’s how he felt.

Oh it’s lovely right now. The weather changes approximately every minute. Last night I made a home in the hotel bar and the pub Packie Willie’s. Pretty much everyone treats you like a friend and wants to know all about you and shares their own life story or take on American politics or what have you. The bartenders don’t work for tips which is probably why they don’t try to refill you every 8 seconds and there’s a genuineness to them that Americans lack because they’re not perpetually on the hustle. James at the hotel calls me Sister Assumpta—I forget why, and so does he—and is my new best friend. The pints keep coming even though I say no. “Sister Assumpta!” “How do I make it stop??” “You don’t.” Today he found me walking outside of town. Pulled up to me, opened the door and I got in without a word as though this were intended and as though I’d known him longer than 24 hours. Paula had called the hotel so he had come looking for me.

Seeing the culture differences make me think about enculturation and Althusserian obviousness. It’s not obviously to me that you would order a “diluted orange” at the bar. I wonder about how people learn these things, individually. Like, when did I learn there was an Ireland? Talked about learning history in school with Mark and Eamon at the bar—Mark’s from the north and they were exchanging their own educational differences. But Americans are not taught about other countries in anything other than a theoretical way, or historical as it relates to us. Like I wouldn’t have learned as much about the USSR except I was in grade school during the Cold War. I learned almost nothing—or maybe nothing—about the Troubles. Didn’t involve us.

After a few days they think I am Canadian. After a few more they don’t know where I’m from. One thought I was from Dublin—“You’re not loud enough to be American.” Which is funny because back home I am considered loud, too loud for a woman anyway. In Ireland women are allowed to be as loud as men. One said, “Have you some American or something in you?” This is the woman who has Joe Strummer’s godson and said Joe would have loved the Flat Lake scene.

Places in Ireland I have slept

• An apartment attached to an out-of-business storefront that was once the village post office and general store.
• An old farm house half a mile from the road that had been emptied after the woman who’d lived there for 40 years died—emptied save for a portrait of the Sacred Heart and a plastic bottle of mass-produced holy water. One night I stayed in that house alone. It was terrifying and amazing.
• A hotel in the town center of Clones.
• In the maid’s room of a massive estate house.
• A tent in a field that stretched for miles.
• A friend’s house in the neighboring county of Cavan.
• A friend’s apartment in Dublin.
• A rented apartment in Dublin.
• A horse farm in County Laois.
• And finally, a traveling horse caravan. That’s a whole other story that’s a lot less interesting than it sounds.

I look forward to adding a few more to my list this time around.

7 Responses to “BLOG – Off to Ireland again…”