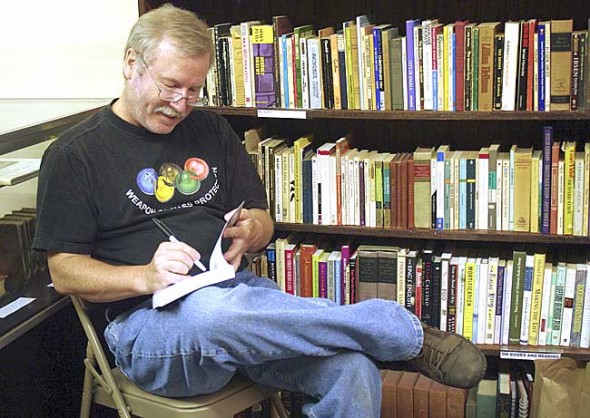 Township resident Lawrence Hammer, an anthropologist, recently published Sin, Sex and Stigma: A Pacific Response to HIV and AIDS, a book that recounts his research on Papua New Guinea. He’s shown signing his books at a recent reading in Xenia.

Of the 26 countries in the insular Pacific, Papua New Guinea has the highest rate of HIV infection: 98 to 99 percent of new cases occur there, according to anthropologist and Wittenberg professor Lawrence Hammar. Yet, he said, the state can’t effectively address the problem because it fears offending outside aid organizations that oppose condom use and target the wrong groups for sexually-transmitted disease, or STD, prevention.

Hammar, a Yellow Springs resident, presented his recently published book Sin, Sex and Stigma: A Pacific Response to HIV and AIDS, at Blue Jacket Books in Xenia. In the book, he discusses the current situation in Papua New Guinea, his concept of how the fight against HIV and other STDs there can advance, and the obstacles that lie in the way of changing the status quo.

Hammar first traveled to the Pacific island country that lies north of Australia and east of Indonesia in 1990. As soon as he arrived, Hammar said, he knew that was right were he belonged.

“I felt like I had come home for the first time ever…like I could drop all pretenses and just be my real self…so much that I experience culture shock when I come home,” he said in a recent interview. He stayed for two years, conducting research for his PhD.

Hammer later returned to Papua New Guinea from 2003 to 2006, when he was team leader of a study on STDs, HIV and AIDS. He and about six others worked at 11 field sites, educating the public about prevention, providing tests for HIV and other widespread STDs, and conducting both qualitative and quantitative research.

“It was life-changing and it was really the best three years of my life, but it was also really difficult,” said Hammar.

A number of challenges to the kind of sex education and STD-prevention work Hammar promotes presented themselves in the “tremendously Christian,” heavily “missionized” country, Hammar said. While Papua New Guinea is “extremely rich in terms of natural resources,” these resources are mostly exploited by foreign corporations that take the wealth with them out of the country, he said. With only a very “weak” state in place, “churches and NGOs jump in and provide half the health services, way over one-half the education, lots of peace and social justice initiatives…in many places they are the face of order,” said Hammar.

The conservative religious non-governmental organizations, or NGOs, “are impervious to criticism when it comes to sex, because [the state knows] they will leave” if they take offense, he explained.

The majority of religious groups, both Catholic and Protestant, oppose condom use. Some governmental aid groups (including American ones) shun condoms as well: PEPFAR, the President’s Emergency Fund for AIDS Relief, has a policy of not promoting them and spends a third of its budget on abstinence-only education, Hammar said.

“What they’re not teaching people to do is how to have sex safely, consensually, pleasurably,” he said.

Instead they teach “sex in marriage and nothing but, and no condoms…and no discussion,” he said. Couples are not encouraged to ask questions about a partner’s past sexual history or other factors that might help prevent transmission of STDs.

Those groups that do encourage condom use nonetheless often send the wrong message, Hammar said.

“Even under the best of circumstances you’re supposed to use condoms, but not with your wife,” according to these groups, Hammar said. Yet, “in many, many, many countries, the risk of transmission of HIV and STDs are greater in or on their way to marriage.”

Factors such as legal polygyny (having more than one wife at a time), labor migration which separates couples for long periods of time, and sex work as a means for impoverished women to support their households, increase the risk of HIV transmission among married people, he said.

“What I’m most angry about, which is why I wrote the book, is this belief in women’s biological vulnerability,” when their actual vulnerability arises from social situations, Hammar said. For example, “Women are…traded back and forth between groups of men in marriage so they are not really persons in their own right,” he said.

The battle against STDs is not moving backwards, said Hammar. “It’s moving forwards but not fast enough to keep up with the rising tide of infections.”

To reverse this trend, Hammar believes that health workers need to fundamentally change their approach to STD prevention, actively encouraging condom use, especially among the heretofore-neglected married couples group, and opening up discussion about sex so that attitudes can change.

Hammar hopes to return to Papua New Guinea by the summer of next year; this summer he will spend 11 weeks in Fiji, another Pacific nation which has an increasingly high rate of HIV infection. While there he will teach a group of HIV-positive individuals “the rudiments of qualitative research methods,” and they will then gather information on intimate-partner transmission of HIV.

“We’re not going to focus on the already stigmatized, already vulnerable people,” but instead “pastors, pastors’ wives, university students…the people who haven’t been targeted,” he said.

Hammar’s book, Sin, Sex and Stigma, is available from the publisher at http://www.seankingstonpublishing.com or from Hammar at gorokadubu@att.net or 767-0173.