BLOG – My experience with Faux-Real Theatre

My first encounter with Faul-Real Company Director Mark Greenfield was classic Antiochian, appropriate as all parties involved are Antiochians.

My buddy Michael Casselli, who designed their set, said to me, at the Emporium on Friday the 13th, “You should go to the theater workshop that starts tonight.” I snarkily replied, “I thought I couldn’t because I’m not a man.”

I didn’t realize that Mark—Oedipus Rex director—was right there until he said to me, “No, that’s just the play; the workshop is open.”

I apologized for my brash statement—I really didn’t feel any contention about their casting choice, because I knew the purpose of it; I was just saying that to be snarky to Michael. Mark said, “That’s okay, I knew what I was getting into when I made that choice.” “Especially around these parts.”

I couldn’t make the workshop that night but Mark seemed like a cool guy, so I checked it out, liked what I read, and went the next night.

The workshop was called “Make Theater Anywhere” and its mission was to teach about environmental theater—making theater in outdoor and non-traditional spaces. The workshop met for a week in the evenings, culminating in the creation of a short play that was performed in the amphitheater before Oedipus Rex.

In his introduction to our performance that weekend, Mark explained how the workshop morphed into a how-to on spontaneous, democratic theater. As that’s one of my favorite forms of theater to make, I was quite happy with the transformation. The workshop quickly became the highlight of my week.

Mark’s wife, Laura Barnett, co-ran the workshop with him and their son, JackAllen, participated. The other folks in the workshop and performance were myself, local Springers Ali Thomas and Charlotte Walkey, Antioch/Nonstop students Jeanne Kay and Rose Pelzl, local teenager Jaylin Walker, and two teens who had travelled with the theater company, Alassane Diop and Donatello Meltz-DeMeo. An honorary mention goes to Rachel, who was in the workshop the whole week but was out of town during the weekend performances.

Between all of the participants was a diversity of ages, backgrounds, and theatrical experiences and approaches that proved challenging and rewarding during both the early theater exercises and the process of putting together the show.

Many of the early theater exercises were techniques on presenting theater outdoors, using space, movement, and gesture—including some dabbling in commedia dell’arte, Italian Renaissance street theater, a personal favorite. Over the course of the week, each of us was tasked to bring in different things—texts to be performed in particular spaces; props, costumes, or other elements we’d like to see in the final show; pieces of overheard dialogue as short texts to play with. Workshop locations were all over campus and included the South Gym and its parking lot, the Amphitheatre, Red Square (between Main Building, North, and the mound), and the golf course. As the week drew to a close, we began to shape our piece, but the actual form wasn’t set until Thursday, the day before our first show.

We incorporated ideas from everyone in the group, using bits we’d developed or that had surfaced over the week. Example: I brought in the ropes, because I’ve been trained as an escape artist and love them as theatrical props. The running joke of JackAllen incessantly begging to be tied up was just as it had happened during the workshop, whenever the rope was visible. The political text pieces were excerpted by Jeanne from an article in the New Yorker that, when she read it, she found to be theatrical. Lying was an element that Ali wanted to explore. And so on and so forth.

Our show was a lot of fun to perform and the audience seemed to enjoy it, particularly when we interacted with them directly (another favorite theatrical element of mine). I think we did end up developing a nice troupe dynamic, particularly as the weekend wore on. I hadn’t done theater for a long time, so just being on stage again was a lovely rush. 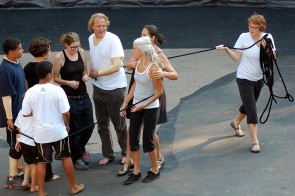 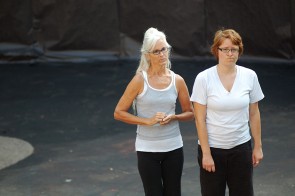 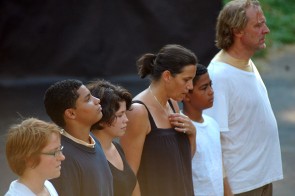 After our show was Oedipus Rex, and let me tell you, it blew me away. Classical theater isn’t always my cup of tea, because I have a hard time with archaic, verbose language. But this production of Oedipus Rex made the language and story all the more beautiful through its clever, stark, and very physical staging; expressive and sparsely-used masks; expressive and sparsely-used sound effects; and most importantly, its stunning performances. Many of the actors still had their scripts in hand, but it didn’t matter—they delivered their performances with a furious passion that drew me into the guts of the play as I’m sure no other production could have done. I watched the show with relish that night, and the following night, and was sorry I had to miss closing night. 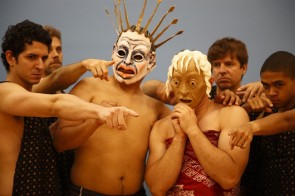 Over the weekend I got to know Mark and Laura more, as well as some of the other company members. The last carload of them left on Tuesday, and I miss them already. I love having visitors in Yellow Springs, to break up the routine (such as it is in this unpredictable and oft-shifting place!), and theater people involved with Antioch are for me just the cat’s meow.

Throughout the week, the Faul-Real crew made me miss and love theater again, just as marked a memory as the moment I first realized I loved theater. I’m happy to say that there’s increasingly more buzz for new theater projects here in town, and I encourage all of you to participate, as practitioners and spectators.