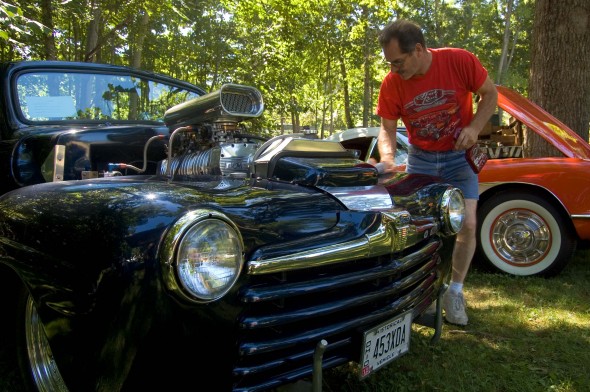 See you at the car show

The automobile has always been a vessel of freedom in America. We pride ourselves in our mobility. Being able to hop in a car and drive anywhere we want on a whim is a deep-rooted aspect of American culture, and it’s hard to get more American than a car show. Big engines, shiny chrome and a killer paint job: that’s the American dream.

The car show at the Bryan Center on Saturday, Aug. 28, pulled over 50 entries from all over the area. The cars spanned many decades and models, from ancient Fords to brand-spanking-new Corvettes. All the proceeds from the event, which was organized by John and Sonia Clark, are going to the Senior Center.

Nelson and Jane Faulkner, a retired couple with a 1963 Mercury Monterey, explained that most people shut their cars up during the winter to avoid inclement weather conditions. The Faulkners use an old barn to store their car. Until then, however, they cruise over 4,000 miles all around the country during the summer (“We’re old, what else is there to do?”). If anyone is living the American dream, the Faulkners are not far off.