Today “Pen and Squid Ink” is brought to you by guest blogger Vanessa Query. Vanessa, a native Rhode Islander, wrote this shortly after moving back to Yellow Springs from her home-state, already missing fresh shellfish. We thought it was appropriate to include in this blog. Enjoy. —Lauren & Vanessa 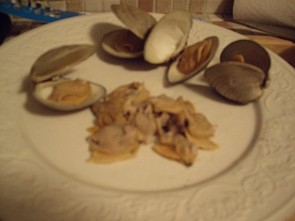 Steaming little-neck clams might be easy in that there aren’t many steps involved, but there’s a real science to it, that requires you pay a lot of attention the whole time. You can’t just toss them in a pot with some water and leave them to cook, and turn your back and chop some veggies or whatever. I mean okay maybe you can until the water starts boiling, but once things get rolling the little-necks require your undivided attention. Anything less would be not only an insult to these beautiful creatures that are giving their lives to feed you, but they won’t turn out all that good.

See the thing is, each little-neck peaks on its own time. They are singular creatures rarely subject to the pressure of their peers to be finished at a certain time. And you can’t make assumptions about them based on their size or color or texture differences or whatever—sometimes the big ones are done first, contrary to what you may think and sometimes the last hanger-onner is the smallest, thinnest-shelled one. That’s the beauty of them—they are wholly unpredictable and that’s why you need to pay attention to them, really get to know them as connected yet unique creatures.

They are easy to cook in that you don’t need a lot of ingredients, I’ll give you that. None in fact, just the clams and a bit of water. Oh sure, when you start off you want to put more stuff in, you think they need it. My first time I asked the shellfish guy, what’s your favorite little-neck recipe? Really what I was asking was how do you cook them because I’ve never done it before, but I was embarrassed. I mean here was a real rugged South County shellfisherman and I’m supposed to be a good little New Englander, and know this stuff from birth or something. He said he liked to steam them in a little white wine and garlic, put them over pasta and you got your sauce right there. Well I didn’t have any wine and I’m allergic to pasta, so I used water and garlic instead and just ate them straight up, and eventually I gave up the garlic and just used water.

Thing is about shellfish, I mean good shellfish, is that it’s got the taste of the ocean in it. And does the ocean need seasonings, I don’t think so. Oh sure, you go other places you get clams that aren’t briny at all, or even fresh-water ones, but not mine.

So no I don’t use garlic or white wine or lemon or fresh thyme or black pepper or whatever. Just a bit of water at the bottom of a pot, I rinse off the little-necks and put them in with the heat on medium, just enough water to cover them. The water will take a bit of time to heat up but once it does, you need to be there, looking and listening, listening if you decide to cover the pot which I would only recommend doing if you’re confident, you can’t always hear them so you need to be checking often.

You know when a little-neck is done when the shell opens. As soon as one opens, get it out of the water—leave them in and they get all rubbery and weird. Sometimes they pop open and you can hear them, but sometimes they open gradually, and quietly. Which is why you need to keep checking and not just listen. The ones that pop are a joy to hear and to watch, they twitch and shake a little in the water before opening. The gradual ones are tougher, because you never know when they’re done opening, but it’s better to take them out too soon than too late.

So you see why you have to keep on them. Thing is—they don’t all open at the same time. It’s really random, they just open when they feel like it, when they’re good and done, that’s why I said you can’t expect them to all act the same, or how you think they should act based on how they look. You have to be patient; they need their time, and they like it when you watch them.

So that’s how you steam little-necks. When they’re done they’ll all be different temperatures because they cool kind of quickly, so you’ll want to sift through the bowl and eat the first ones you took out first. I just use my fingers to pull them off the shells and drop them into my mouth, and sometimes I’ll suck the shell dry, or put the shells back in the water and simmer them for however long, and then you’ve got a nice clam broth, which you can use for anything, clam chowder of course or a stock to cook rice in or whatever. Imagine that, rice that tastes like the ocean. Anything that tastes like the ocean is a good thing.