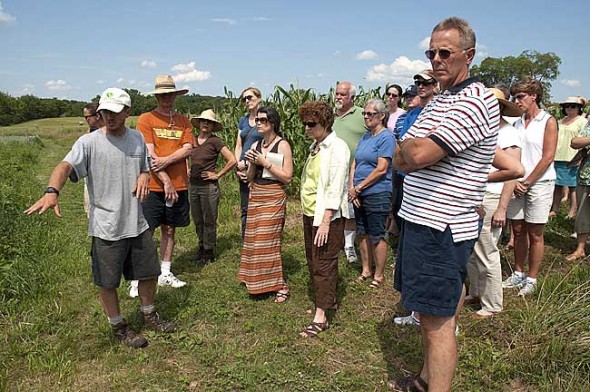 Doug Christen of Smaller Footprint Organics, a three-acre farm two miles north of Yellow Springs, shares his approach to sustainable farming at a tour of local farms organized as part of the Yellow Springs Experience by the Tecumseh Land Trust.

That Yellow Springs would attract visitors to arts, wellness and eco-tourism activities didn’t surprise the organizers of the Yellow Springs Experience. But the nearly 20 local organizations that put together the 10-day educational event in mid-July did learn ways to improve upon its first effort.

“What the group felt was there is definitely something here, something very compelling and something to continue working on,” said Anita Brown, board president of the Arts Council, which led planning efforts for the first-year event.

Despite a few hiccups, those who worked over the last six months to put it together judged the Experience a success. There were 242 advance tickets sold with many more attendees forgoing advance purchase. Participants came from as far away as Chicago, Grand Rapids, Michigan and Ottawa, Canada, though most were from the village and surrounding areas.

The largest crowds flocked to the farm tour, a Bruce Cromer theater performance and the event’s launch party, where 400 people streamed through the new home of the Yellow Springs Arts Council despite a downpour of rain.

Thirty-seven people attended a tour of local sustainable farms organized by the Tecumseh Land Trust, many from more than 60 miles away, at a price of $15 per person and $20 per family. The event sold out online and many hopeful attendees could not be accommodated.

“We could have filled it up three or four times over,” said land trust Executive Director Krista Magaw, who attributed the tour’s success to its popular subject matter.

“I think that people are very interested in where their food comes from,” she said. “People are playing more of a role in raising food in addition to changing what they eat and where they shop.”

Now aware of the high demand for such tours, Magaw sees an opportunity to host more frequent tours to gain exposure for the land trust and generate new members.

“We want to be a player with these types of activities for the purpose of broadening the experiences people could have — we wanted to make sure that nature and the environment was part of that whole mix,” Schneiders said.

Organizers praised the ease of their central ticketing mechanism, their high level of exposure through marketing and the media and the unprecedented collaboration among so many local groups.

“Our goal is to involve as many organizations as want to be involved so that it carries on in this collaborative spirit,” said Brown. “The overwhelming feel amongst the partners is that it was a fabulous collaboration.”

Committee member and Yellow Springs Kids Playhouse Executive Director Lisa Hunt said she saw the value in many organizations sharing the hard work of putting on such an ambitious event.

“To plan something this hard is the biggest benefit to the community because it sets the stage for us to plan better and plan more things,” she said.

However, Hunt cautions against booking similar events on the same night, which may have hurt attendance at the YSKP production, The Conference of the Birds. Its play competed with the Dayton Street Cirque Carnival, when only 41 people attended the YSKP play, the lowest attendance ever measured. In addition, it was up against Bruce Cromer’s theatrical production, which was free-of-charge, and another local play.

“It was the worst attendance since we started taking records,” said YSKP Director John Fleming. “I don’t know if we have the audience to have two theater productions at one time.”

Brown said that organizers had hoped to avoid competing with existing events like YSKP by increasing overall attendance at all events.

“It was never our intention to have two events compete,” said Brown. “Our intention was to bring in more people to attend all events. We really need to look at what is free and what is not free to make sure our events don’t cannibalize other events.”

With lessons learned, organizers look to the next incarnation of the Yellow Springs Experience, potentially to be held next summer. The committee is considering hosting the event over a series of weekends, since few participants attended the weekday activities. Another idea is to create more connectedness between workshops by organizing them into themes, or having thematic weekends spread throughout the year.

Most important is raising attendance, which will generate more revenue for local artists and workshop presenters and more economic impact, as people stay in town overnight.

“Our main goal was to bring arts experiences under an umbrella to try to help artists and encourage out-of-town visitors,” Hunt said.

“If people are coming and spending a few days, they’re going to be going to the restaurants and shopping,” said Chamber of Commerce Executive Director Karen Wintrow. While many of the most well-attended events at this year’s Experience were free activities like the Dayton Street Cirque Festival, Wintrow hopes that the educational workshops play more of a role in the future.

“We need to find a way for the education and the art to be the centerpiece,” she said. “That’s where the benefit to the artists and the community comes in.”