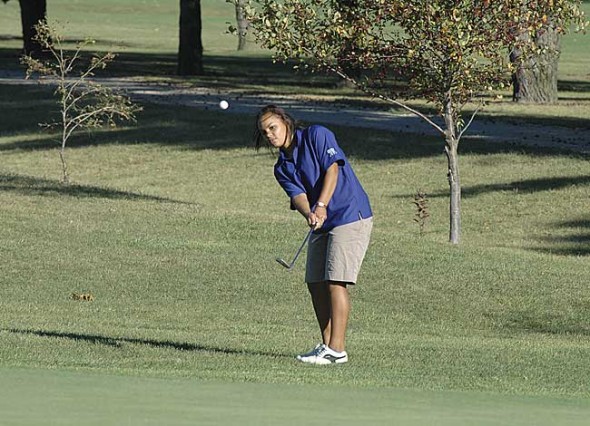 Rachele Orme chips onto the green of the third tee at Locust Hills last week in her 50-stroke performance against visiting Bethel. (photo by Megan Bachman)

Golf team gets into the swing

On Wednesday, Sept. 8, the golf team hosted Bethel at Locust Hills golf course in Springfield. The team drove, chipped and putted their way through the course on a beautiful early fall day, ultimately losing the match by a score of 172–211.

Leading scoring for Yellow Springs was Carl Wiener, who last year qualified for the Division III District tournament, at a score of 42, followed by Rachele Orme at 50, Zeb Reichert at 51, and Zoey McKinley and Taylor Beck, who both shot a 68.

So far the Bulldogs have won one match, with four remaining in the season. First-time golfer Beck sees her game improving, despite the challenges of the sport.

“From the beginning until the end of year I’ve improved a lot,” Beck said. “It’s really frustrating, but it’s fun to be out here with all my friends.”

According to head coach Mike Reichert, it’s unusual for a golf team to have four girls and just two boys. His coaching focus is on helping them compete while growing as individuals.

“Golf is a huge character-building game,” he said. “It’s a grown-up experience for all of the young kids playing golf. You can see them mature into it.”

In the team’s 6–1 loss to Dayton Christian on Thursday, Sept. 9, Isaac Haller grabbed the Bulldogs’ lone goal in the second half after trailing 4–0. Haller followed up a Jake Trumbull 20-yard boot blocked by the Dayton Christian goalie to net the loose ball from seven yards out. While missing two starters, the team dropped to Fairbanks at home by a score of 3––0 on Saturday. The team is still looking for that first elusive win.

The girls varsity volleyball team dropped a match at home last week before winning three straight-away games to improve their record to 4–5. After losing to Dayton Christian 17–25, 14–25, 20–25, where Jenna Boettcher led with six points, the team traveled to Dayton Jefferson, winning by scores of 25–10, 25–8, 25–16. At that match, Angela Allen brought in 17 points and seven aces and Tasha Perry had 14 points with eight aces.

The junior varsity team won two and dropped one this week to improve their season record to 2–5. In its loss to Dayton Christian at home, Hannah Brown and Mychael Roberts each had five points. Against Belmont the team won 25–17, 25–19, with Kennedy Harshaw’s nine points and six aces and Stephanie Marion’s seven points and three aces. Kelsey Fox had 13 points and 12 aces during the team’s win at Stivers by a score of 12–25, 25–11, 25–22.

Zack McHugh led the Bulldogs from Yellow Springs to a second place finish at last Saturday’s Ambassador Invitational, upping the squad’s season record to an outstanding 49–15. On a difficult course, McHugh posted a 12th-place finish in 18:59, followed by senior captain Gabe Amrhein at 15th and Mitchell Brickson in 17th out of the 177 men. Rapidly improving Nathaniel Reed and Nerak Paterson completed the scoring, placing 23rd and 24th overall, respectively.

“The Bulldogs had a great pack, with only 45 seconds between our first and fifth runners,” said head coach Vince Peters.

Despite missing the team’s seniors, the Lady Bulldogs took fifth at Saturday’s Ambassador Invitational with a stand-out performance from sophomore Lois Miller. Miller placed second out of 56 women while Talia Boutis came in at 14th and Christina Brewer in 20th.

At a tri-meet on Saturday the McKinney eighth-grade volleyball team lost to Dayton Christian 24–26, 25–21, 22–25 and to Middletown Christian 13–25, 25–11, 13–25. Despite the losses, the team had six players serving at 75 percent or better. Jesi Worsham and Kara Edwards each had six kills during the matches. The team’s record now stands at 1–2.

Sage Hale Wolf finished 30th out of 64 runners at the most difficult course of the season, coming in at 17:24 for the two-mile race.

On Saturday, the McKinney football team lost to Lebanon Christian by a score of 40–14.