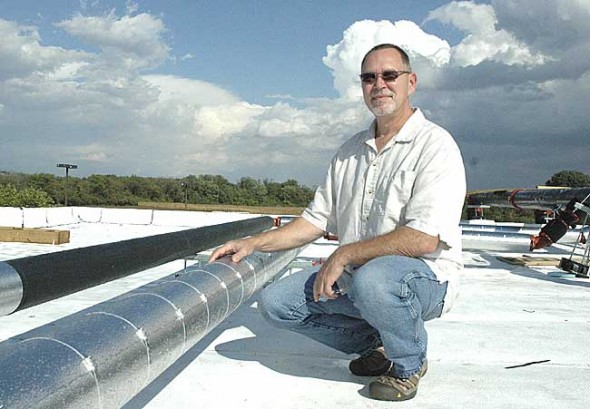 Local architect Ted Donnell recently led the design of an energy upgrade at the Greene County Career Center. From the center’s new insulated roof, Donnell stood proudly before the just-installed geothermal well field (left) and a natural wetland to process waste, both of which he conceived. (photo by Megan Bachman)

GCCC upgrades are good for the earth and pocketbook

When local architect Ted Donnell began working with the Greene County Career Center five years ago, he brought with him an environmental ethic that culminated in a $6.1 million energy upgrade over the summer, replete with geothermal heating and cooling and an insulated roof.

The center, which runs career and technical programs for high school and adult students, is implementing Donnell’s master plan on greening the school to cut energy costs and teach students about conserving resources.

“We believe that being more green is the wave of the future, and for us to set that example for students as they enter the business field and start their companies is important,” said GCCC Superintendent Dan Schroer.

Last week, the 43-year-old building’s brand-new rooftop mechanical units became operational. The units draw water from 350 geothermal wells installed 300 feet deep over four acres. Because of the ground’s natural insulation, the water is a consistent 55 degrees Fahrenheit all year round.

“That’s why it’s so efficient,” said Donnell, the project’s lead design architect. “The only thing you’re heating is the extra 15 degrees.”

The roof of the facility, built with minimal insulation, was completely replaced with a roof three times as insulated and painted white to reflect the sun’s rays, reducing the number of degrees the air temperature inside the building needs to be cooled.

Administrators decided on a white roof after Donnell’s energy calculations determined it would save more energy than a black roof, which helps heat the building in the winter months, because of the large cooling load of summer classes.

“Every building has a life cycle for the materials it’s made of,” Donnell said. “Until you do a complete building analysis, you don’t know.”

According to Donnell’s energy accounting, if the center replaced its equipment with similar mechanical systems and installed a standard black roof, it would have spent $363,000 per year on energy bills and $20.3 million over the lifetime of the equipment. Choosing a geothermal system and white roof will cost just $230,000 per year, and $15.3 million over its life cycle.

“The proposed systems upgrades have shown significant improvement over existing conditions, with a short payback cycle and high return on investment,” Donnell wrote in an analysis prepared for the center.

This wasn’t the first time Donnell’s ideas saved the career center both energy and money. Two years ago, when its aging sewer system’s overflowing swales were polluting the nearby pond, he suggested a natural wetland system. Instead of a proposed $500,000 conventional upgrade, which would have doubled the sewage treatment’s electricity load, Donnell’s plan of using plants to process the waste cost less than $200,000 and actually reduced the electricity demand.

The gravity-fed system includes an aerated sludge pond, a field of lilies to remove nitrates and a greenhouse filled with waste-processing plants used during the winter. The wastewater now enters the pond potable.

“These green ideas actually make economic sense,” Donnell said. “The designs are not typical because I’m not that type of guy.”

Another environmental consideration during the project was the recycling of discarded materials. The insulation board from the roof and the metal and rubber from old mechanical systems were picked up by the truckload by area builders and homeowners.

“Compared to a dome skylight, it saves 15 percent of the energy,” Donnell said, adding, “I have definite stats that say with fact that daylight contributes to the health and well-being of the students.”

If successful, the skylights, built in Millworks in Yellow Springs by SageOne Construction, could be deployed around the building. Two similar skylights, which also included automatic windows for ventilation, were installed at Yellow Springs High School this year.

The $6.1 million facility upgrade, almost half of which went for the geothermal system, was financed in part by a 2008 county-wide permanent improvement levy. Matching funds provided by the Ohio Schools Facilities Commission means that about 25 percent of the total project cost or around $1.5 million will be paid back to the school. In addition, due to reduced utilities and maintenance costs, the career center will see substantial financial savings.

“It’s an outstanding use of the public’s money,” Schroer said. “We’re saving tax payers money in the future by not paying as much for utilities.”

On the career center’s 25-acre campus, environmental learning opportunities for its 620 on-campus students abound. Not only will carpentry students and aspiring electricians examine the renewable energy systems just installed, those studying natural resources will soon convert a cornfield into a five-acre forest arboretum and plant and tend prairie grasses on the geothermal well field.

Of his green architecture focus, Donnell remarked, “I’ve done it my whole career. It always made sense that if you’re borrowing from the earth, you have to make [the earth] better.”