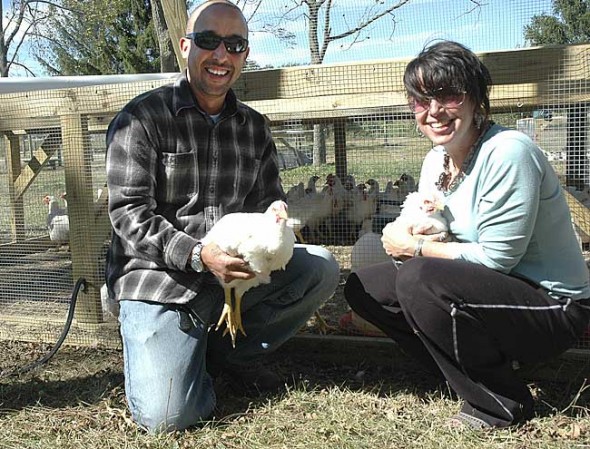 Local residents Richard Taylor and Kat Krehbiel launched the first phase of their local food and independent living corporation with a chicken and water buffalo farm on Mosier Road in Yellow Springs. (photo by Lauren Heaton)

The butter-yellow chicks twittering about in their baby blue swimming pools look and sound happy and healthy. Though in about six weeks, most of them will become someone’s dinner, their brief lives will be spent frolicking with their brothers and sisters with plenty of grains, bugs and grass to eat. The folks at New Liberty Farms would have it no other way.

The operation that local residents Kat Krehbiel and Richard Taylor started this year on a farm on Mosier Road, about two miles north of Yellow Springs, began with the village’s first commercially raised, free-range, and almost organic chickens. The business sold its first batch of 100 fresh birds to local residents three weeks ago.

But the owners’ four-year plan is about much more than poultry. It’s about preparing the way for members of this community, and possibly others, to maintain a livelihood when there is no longer affordable fuel and stable ecosystems to facilitate the production of nearly every good and staple that we currently live on.

“I have a vision of Yellow Springs in 10 years, that we could be energy, water and food independent if we needed to be,” said Krehbiel, who described her name as the “business incarnation” of Kathleen Boutis-Krehbiel. “Because the road is going to get really bumpy in the next 10 to 15 years for all of us.”

From Krehbiel’s perspective, the world is not a stable place. The carbon emissions at the root of global warming are causing increasingly chaotic weather patterns that are likely to jeopardize centralized farming practices and food supply chains across the country, she said. At the same time, the oil dependent economy can no longer rely on the availability of cheap fuel for food and water transport due to the depletion of accessible oil supplies around the world, which is at peak oil. While for some, these facts may be a vague future concern, Krehbiel doesn’t want to wait around for hardship to settle in. For her, right now is the time to act, and putting some fervor into it wouldn’t hurt, either.

The 12 acres on Mosier Road currently house almost 1,000 chickens, 20 turkeys and 11 Asian water buffalo that will be raised for milk, cheese and meat. Part of that farm will also be cropped for feed grains and hay. But Krehbiel and Taylor have purchased two other properties, one 15-acre farm on U.S. 68 just north of the Hustead fire station, the future home of an aquaponic vegetable and fish farm and alternative energy systems provider, and another one on U.S. 68 and Jackson Road, where New Liberty’s sustainable living retail store will eventually open up.

The chicks on Mosier Road are mostly Cornish cross breed broilers that come from Kemp Feed in Cedarville, with some Buckeyes for laying eggs, according to farm manager Marc Johnson. They are raised without hormones in a stress-free pasture and trained to graduate from grains to bugs and grass for food. After six weeks they are trucked to King & Sons near Piqua to be slaughtered. They are packaged that same day and trucked back to the refrigerator on the Mosier Road farm for purchase two days after they are killed.

Though the first batch of chickens sold out, the second week some of the chickens were frozen, which made the meat more tender, Krehbiel said. Customers can reserve a 3–5 pound chicken for $10–14 by calling New Liberty at 668-2857. Pick-up days are usually Fridays, between 4 and 7 p.m. and Saturdays, between 10 a.m. and 1 p.m. But customers with last-minute needs can call and arrange to stop by the farm with the red metal gate, located on the east side of Mosier Road, just after Meredith Road crosses into Clark County and turns bumpy.

While for the moment, the water buffalo are content to stand in the shade and sniff the breeze, in one more year they will begin producing milk and breeding for meat, Jacobs said. Eventually New Liberty will establish its own hatchery and butchery to ensure that the entire process is as humane and healthy as it can be. And Taylor, who grew up in Yellow Springs, is preparing the farm on U.S. 68 for aquaponics, the symbiotic cultivation of plants and fish in a closed-loop system.

Krehbiel led a landed childhood in Texas and Kansas and has been thinking about sustainable farming since her college days at Oberlin, where she majored in agricultural ethics. She knows that her business plan is an ambitious, long-term enterprise, but she feels that her entire adult life has been leading her to this exhilarating point of animating her philosophy about society and the earth.

The subsistence living that New Liberty subscribes to is the antidote to the corporate-led consumerism of an American culture that is addicted to Wal-Mart, has forgotten how to grow and craft its own goods, and is now polluting the environment with centralized and unsustainable production methods, Krehbiel said. That same culture of corporate dependency has seeped into political participation and led to the degradation of the democratic process, she said.

“It’s all about recovering a democracy — we don’t participate anymore,” she said. “This is the reason why I was put on the earth — to do this, and I’m going to know I have succeeded when all the major corporations have me on their hit list.”

Krehbiel is board chair of Ohioans for Health, Environment and Justice, a statewide advocacy group for underserved and rural communities. And she intends to use the New Liberty model of self-sustenance as an approach to solving issues of poverty and inequality for both rural and urban communities in the region. If she can train others to implement their own local food and energy production systems, they would have the leverage to lift themselves out of the capitalist system that locks them in a cycle of poverty.

Of course, that stage is several years in the future, after Taylor gets the aquaponics going, and the store begins to generate some revenue to fund local development projects. For the moment, New Liberty is focused on getting the first farm operable and on making contacts with supporters who feel it is a worthy investment. Krehbiel hopes to eventually turn the operation into a community corporation, owned by every member of the area community.