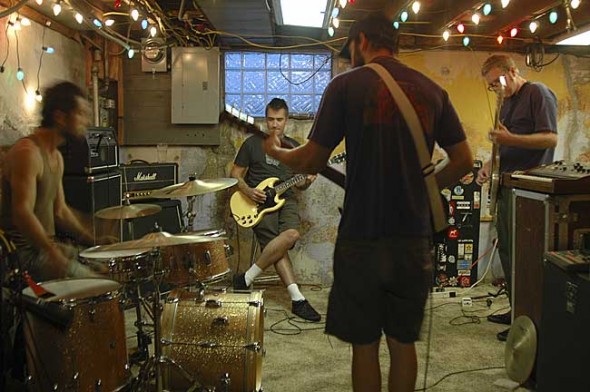 Kuan’s brand of experimental instrumental rock music breaks all the rules. More art than entertainment, the local band’s addition to the already-diverse Yellow Springs music scene is rock that’s both highly composed and free jazz-inspired. Recently returned from a 32-day, 30-city nationwide tour and with a new EP album,“Colors,” Kuan is on its way to carving a niche for itself on the fringes of the post-rock movement.

Still, the sound is all their own.

“We use typical rock sounds in a different format,” said drummer Brett Nagafuchi. “It’s not the standard pop format of verse-chorus, but is more dependent on the idea of creating a texture which is more dynamic.”

Band members strive to provide listeners with music they haven’t heard before.

“One of the things I’m most proud of is we’re original in our sound,” guitarist Paul Larkowski said. “There’s not a lot of bands that don’t sound like something else.”

“Kuan refers to a Taoist state where you don’t attach to what’s going on. It’s going with the flow in a state of wordless contemplation,” Nagafuchi said. “The goal is a pure meditative state, but our music is super-mental.”

“It’s a name for us to strive for,” Larkowski said.

Now the two local musicians, who are also part-time Sunrise Cafe waiters and farmers, are experimenting with the “commentary of sound,” through the side project Dialectic, whose first show is Oct. 9 at the Dayton nightclub Blind Bob’s.

Kuan’s month-long tour saw the band at bars, record shops and art galleries in all parts of the country, with stops in St. Louis, Denver, Seattle, Sacramento, San Diego, Atlanta, Washington, D.C., Boston and more than 20 other cities and towns. Between a live radio broadcast in Los Altos, Calif., a terrific turnout in Austin, and a show in the progressive rock mecca of Baltimore, Kuan shared its music, and its merchandise, with an appreciative audience.

“You have to go on tour to get records out and spread things around,” Larkowski said. “We improved our playing, made connections…and it was fun.”

Unfortunately, all of the tour’s proceeds ended up going into the gas tank of Larkowski’s 1984 GMC van, which shuttled the group and its gear 12,000 miles around the nation. The beloved vehicle “almost blew up in Nashville” when black, blue and white smoke began pouring from the  engine.

While the high-energy, dramatic music offered up by Kuan is best experienced live, the band’s three self-released albums contain all the elements of its complex sound — from its dizzying, ever-changing drumming to the swirling, interweaving guitar voices to its fast-moving bass lines and atmospheric electronic flourishes.

With music that defies its own labels of math rock, post-rock, and progressive rock, Kuan and its new project, Dialectic, aim to culminate a long-held dream of Larkowski and Nagafuchi to “pursue free music.”

“At its most raw state — the soul of it — we are channeling energy with no thought,” Nagafuchi said. “We’re musically informed by the lyricism of jazz and now trying to get comfortable to where we can get loose and express ourselves.”

Nagafuchi began his musical career as a toddler banging on pots and pans, while Larkowski was inspired by his Wright State University music professor father and music therapist mother. Both 20-something songwriters find themselves influenced by nature.

“We want to make songs that have an organic function strongly associated with the way wind and water move and how musicians can move in and out of each other,” Nagafuchi said.

Albums can be purchased online at http://www.myspace.com/kuankuankuan . The band’s next performance comes at Blind Bob’s as part of the Dayton Music Festival on Saturday, Oct. 2, at 11:30 p.m. Otherwise, Kuan can be seen at Blind Bob’s, where they play about every six weeks.