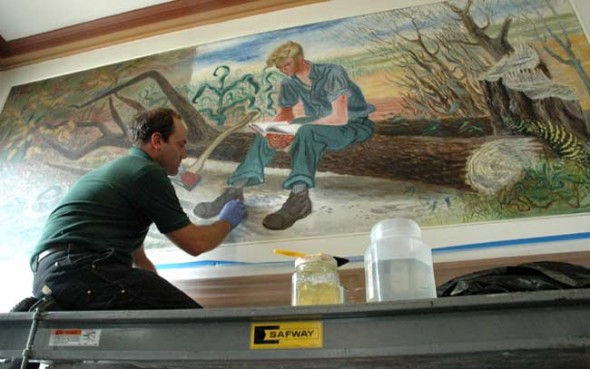 If residents who frequent the U.S. Post Office in Yellow Springs haven’t noticed the mural at the eastern end of the lobby, perhaps it’s because of the grease, grit and grime that has been dulling the paint for the past 70 years. By Thursday of this week, patrons might want to take another look at the painting, which should have a new sheen to it. After conservator John Salhus spent two days this week patiently brushing a light cleaning solution over the work, suddenly the pastoral scene has taken on the romantic glory that its 1941 New Deal sponsors intended.

The oil on canvas piece, entitled “Yellow Springs — Preparation for Lifework,” was painted by an artist named Axel Horn, according to Postmaster Dave Kennedy. It is part of Depression era program of the U.S. Treasury Department’s Section of Fine Arts, which hired artists to “embellish” post offices around the country between 1930 and 1945, according to information from the National Postal Museum Web site. Similar to projects funded by President Roosevelt’s Works Progress Administration, the Section provided jobs for professional artists whose patriotic work often portrayed the “American scene” in public buildings so that it was accessible to people of all social and economic levels.

“Scenes of local interest and events were deemed to be the most suitable…Americans shown at work or at leisure, grace the walls of the new deal post offices….the heroic was to be celebrated and embraced…while the tragic realities” were to be avoided…” the museum’s site reads.

The Yellow Springs mural depicts a young farm boy who is taking a break from chopping wood. He has books and letters, perhaps a tribute to the postal service, and a city jacket, which could signify that he is a college student home on break, according to Salhus, who was hired by the postal department from a Chicago  firm to restore the painting. The brush style is that of Thomas Hart Benton’s regionalism, whose animated and lyrical design can be seen in the mural’s whispy corn stalks and the body of the boy, which sacrifices anatomical symmetry for liveliness, Salhus said.

The WPA funded the construction of the local post office in 1940-41, Kennedy said, and the Treasury Department mandated that 1 percent of the construction funds be set aside for “embellishments,” such as this mural.

One Response to “Post office mural gets a shine”