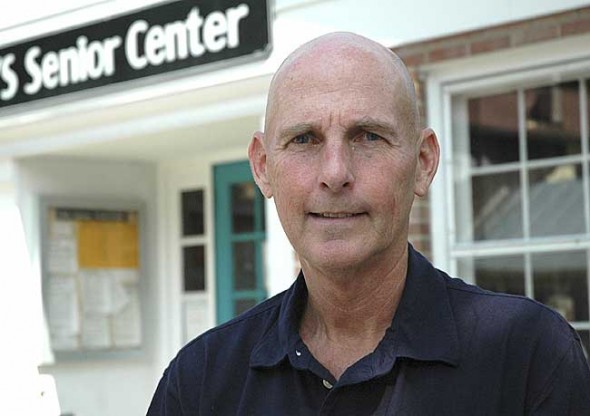 David Scott is the new director of the Yellow Springs Senior Center.

In a town with a growing demographic of healthy retired people with skills to offer, the Yellow Springs Senior Center has an important role to play, according to the center’s new executive director, David Scott. During his first day on the job last week, Scott talked about his idea to broaden the center’s membership and provide ways for younger seniors to connect with each other and help maintain the vitality of the local community. In its new iteration, the Senior Center should have the capacity to serve the current population while expanding both its reach and its purpose, Scott said.

The Senior Center is “not just about service and socialization for the elderly, but it’s also for retiring baby boomers — a hub for active young seniors who could have a way to actively contribute to building community,” he said.

Scott sees a lot of value in the town he grew up in, whose Yellow Springs High School he attended and whose Antioch College he graduated from in 1972. Though he has lived in many places around the country for the past 25 years, he instantly recognized the village when he moved back here last year, he said. While the identities of many cities such as Los Angeles and Honolulu are constantly changing, to him Yellow Springs has maintained its sense of place as a walkable town where people bike down alleys and children play outside in the summer.

As a professional historic preservationist, Scott also sees the unique strengths of a village that can host essential services such as a hardware store, a swimming pool, industries, farmers markets, tennis courts as well as a senior center. Together, all of the businesses and organizations create a well-rounded community, which, minus any one of them, would be a lesser place, he said. And while the village is still healthy, Scott feels the Senior Center could play a vital role in leveraging person power to strengthen all the aspects that make the village complete.

The center could use the expertise of fundraisers, executive managers, builders, communications specialists and Web designers to operate its current home care, transportation and activities services. Expertise might also be needed to reinvent a component of the organization as a clearinghouse for volunteers village-wide, placing them with organizations that need support, Scott said. The center could facilitate think tanks for local experts who might address issues such as alternative energy systems for Yellow Springs or ways to partner with Antioch College and Antioch Midwest for mutual gain.

“It takes a community to utilize and celebrate and care for the elderly — that means from the young-old to those who truly need help,” Scott said. “We have an opportunity to be much more proactive in sustaining what works in Yellow Springs.”

Over the past 20 years, Scott’s former work as the executive director of Historic Wilmington Foundation in North Carolina, Historic Hawai’i Foundation, and Daughters of Hawai’i has given him experience in nonprofit leadership and community building, he said. He has intimate familiarity with multiple generations of locals, as well as exposure to solutions of communities outside Yellow Springs.

Those two attributes were two of the top reasons the Senior Center Board of Trustees chose Scott among over 30 other applicants to lead the center after former director Rodney Bean retired in May, according to board president Anna Hogarty last week. The center hosted a board retreat with the director last weekend to reevaluate its goals in the context of a potential 10 percent growth in the senior population in town, she said. There is a need for growth within the organization, which is already “bursting at the seams” in terms of facility space. And it needs to expand its reach and fundraising in order to serve more and serve better, she said.

“We’re very excited to have David on board and are pleased with a [search] process that was as inclusive as we could possibly be, because I consider the center to be in some ways an untapped resource for the community,” Hogarty said.

Each year the Senior Center serves about 400 local seniors and houses the Home Assistance Program, which responds to 2,400 calls and contacts annually with the help of Friends Care Community. With a not-quite-full-time director, five part-time employees and over 100 volunteers, the center operates on a $200,000 annual budget partly funded by the county’s senior services levy and partly by private donations, former Senior Center Director Rodney Bean has said. Scott is familiar with nonprofit budgets, and knows that though the center will work toward generating for-profit income streams, government grants and fundraising events, the greatest potential for raising funds lies with individual donations and bequests. In his experience, 80–85 percent of nonprofit support comes from “individuals giving to a good cause.”

All nonprofits need leaders who can build support from within the community, shepherd scarce resources in a competent manner and work with a dedicated board of volunteers, he said.

“The ethics of nonprofit work are always the same, whether you’re feeding the homeless or running a hospital, and I like doing it because I like going home at the end of the day thinking I’ve made the world a little bit better place,” he said.

Scott wants to open the opportunity to others in the village who can use their skills to help make the town they inhabit reflect an active and empowered citizenry.

“We need to make a stronger, more vibrant and active Yellow Springs,” he said. “If we can do it, we’re a model for other communities.”