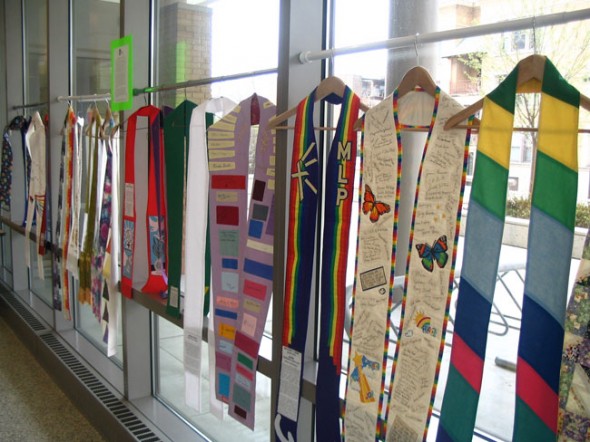 This weekend the First Presbyterian Church will display 50 liturgical stoles of gay, lesbian, bisexual and transgender clergy members from around the country, many of whom have been kept from serving due to their sexual orientation. (Submitted photo from a 2007 exhibit in in Chicago)

Shower of Stoles to exhibit at Presbyterian church

Drawing attention to the plight of gay, lesbian bisexual and transgender people of faith around the country, next weekend the Yellow Springs First Presbyterian Church will host a national exhibit of liturgical stoles representing 1,000 homosexual clergy members of 32 religious denominations, many who have been excluded from serving in their church due to their sexual orientation.

Fifty stoles from the the exhibit, “The Shower of Stoles,” will be displayed on Friday, Sept. 17 from 6 p.m. to 9 and Sunday, Sept. 19 from 1 p.m. to 4 at Westminster Hall. In addition, at a special worship service on Sunday, Sept. 19 at 10:30 a.m. commemorating the exhibit, several of the stoles will be hung throughout the sanctuary and Keith GunderKline will give a sermon on the topic.Organizers view the free event as part of the 150-year-old church’s long-standing commitment to social justice and as an educational opportunity for the community.

“The exhibit will serve as a departure for respectful dialogue,” said 20-year church member Fran LaSalle. “It might not change [people’s] minds, but will encourage them to examine what they’re thinking and feeling.”

Each stole, a long scarf usually worn with ministerial robes, is accompanied by a story of a clergy member — whether a deacon, elder, minister or church musician — who has been, “forced to either not do the work, or have to deny their identity,” LaSalle said.

“I’m proud of our church for taking more of a public stance on this issue which has been hugely divisive of the Presbyterian church at large,” said church elder Jeanna Breza.

Read a the full story on the “Shower of the Stoles” here: https://ysnews.com/news/2010/09/first-presbyterian-church-spotlights-the-plight-of-gay-people-of-faith

One Response to “Shower of Stoles to exhibit at Presbyterian church”