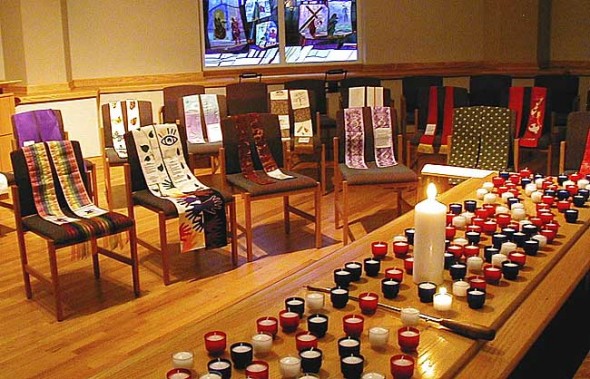 Next weekend the Yellow Springs Presbyterian Church will exhibit “The Shower of Stoles,” a collection of 50 liturgical stoles from gay, lesbian, bisexual and transgender clergy members, many of whom have been kept from serving due to their sexual orientation. (submitted photo from a 2002 exhibit in Indianapolis)

To draw attention to the plight of gay, lesbian, bisexual and transgender people of faith around the country, the First Presbyterian Church of Yellow Springs next weekend will host a national exhibit of liturgical stoles representing 1,000 clergy members of 32 religious denominations, including many who have been excluded from serving in their church because of their sexual orientation.

Fifty stoles from the exhibit, “The Shower of Stoles,” will be displayed on Friday, Sept. 17, 6–9 p.m., and Sunday, Sept. 19, 1–4 p.m., at the church’s Westminster Hall, 314 Xenia Avenue. Organizers view the free event as part of the 150-year-old church’s long-standing commitment to social justice and as an educational opportunity for the community.

“This just fits right along with the ministry of this church,” said church administrator Mary Kay Clark. “It’s not that we’re making a statement, it’s that we’re opening the eyes and ears of people around the community that people who have a strong faith often have to hide who they are.”

While the Presbyterian Church USA, the national organization of which the local church is a member, currently does not allow those who are openly gay and practicing to be ordained, it is one of several mainstream Christian denominations now debating the question of equal rights for homosexuals in the church.

“The exhibit will serve as a departure for respectful dialogue,” said 20-year church member Fran LaSalle. “It might not change [people’s] minds, but will encourage them to examine what they’re thinking and feeling.”

Each stole, a long scarf usually worn with ministerial robes, is accompanied by a story of a clergy member — whether a deacon, elder, minister or church musician — who has been “forced to either not do the work or have to deny their identity,” LaSalle said.

The beautifully decorated stoles, which can be viewed as art in their own right, reflect the feelings of the silenced clergy members who face the threat of being defrocked, about three-fourths of whom are not identified on the stoles at their request.

“[The stoles] symbolize the tragedy and pain it must cost for someone to hide who they are,” said church member Ruth Myers.

At a special worship service commemorating the exhibition Sunday, Sept. 19, at 10:30 a.m., several of the stoles will be hung throughout the sanctuary and Keith GunderKline will give a sermon on the topic. Immediately following the service, attendees can walk through the stoles exhibit, where each stole will be hung with its accompanying story and a film on the project, “How Great a Cloud of Witness,” will play continuously.

“The information is empowering, and when you see a small portion of what is happening in all religious traditions, hopefully hearts and minds can open,” Clark said.

The exhibit continues the church’s decades-long social justice mission, as the first local church to integrate, LaSalle said. More recently Myers has founded “Joined for Justice,” a network of Presbyterian and other churches in the Miami Valley working to reduce homelessness and alleviate financial distress in the Dayton area.

For Myers, hosting the stoles in support of gay, lesbian, bisexual and transgender people of faith is akin to speaking out for those who cannot speak for themselves and is a “basic social justice issue.”

“It reminds the community of who we are and who we want to be,” LaSalle said. “We thought particularly in this community [the exhibit] would be well received.”

“The Shower of Stoles” project began when a Presbyterian minister from rural Missouri who had recently come out as gay asked her friends and colleagues for stoles to hang at a meeting where she set aside her ordination. Almost overnight she received 80 stoles of support, and they kept coming until more than 1,000 were received. The 15-year-old collection now has been shown at 1,500 exhibits and continues to provide “a powerful symbol of the huge loss to churches of gifted leadership,” according to a press release.

“There are a lot of members of the [gay, lesbian, bisexual and transgender] community who have put a lot of energy into their home churches and are not appreciated,” said church elder Jeanna Breza. “At least this is one way for us to acknowledge and show some support for that work that they are doing, regardless of their sexual orientation.”

In June the General Assembly of the Presbyterian Church USA proposed an amendment that would leave the decision to ordain gay and lesbian ministers up to its regional governing bodies, a decision which still needs to be ratified by a majority of the church’s regional groups to take effect. Nationwide polls of Presbyterian church members show a denomination evenly split on the issue.

“I’m proud of our church for taking more of a public stance on this issue, which has been hugely divisive of the Presbyterian church at large,” Breza said.