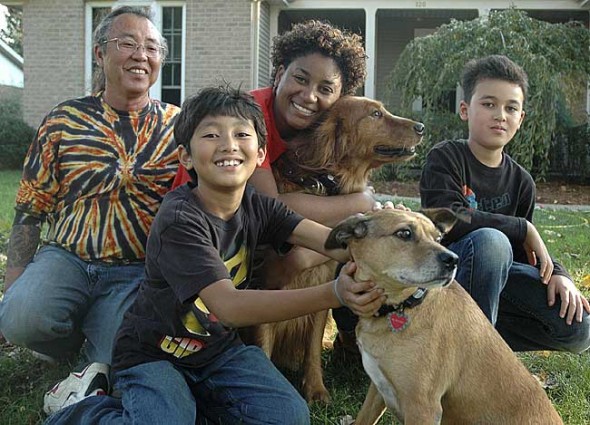 Yukio and Enshané Nomoto moved to Yellow Springs from Japan, seeking a diverse, safe and progressive community. They’re shown at their home with their children, Yukim and Yukaiyo. (photo by Lauren Heaton)

When Enshané Nomoto was looking for a place to settle near her new job last year, she got an obscure recommendation from a classmate she hardly knew to visit Yellow Springs. She didn’t know what to expect. She and her husband, Yukio, were looking for a place that was progressive, safe and diverse enough for a biracial, bilingual, bicultural family, and the Beavercreeks and Oakwoods in the area didn’t fit the bill. Upon entering the village, the first thing she saw was the stylized Obama banners around the downtown, and she knew she had come to stay.

“I was like, okay, I think I found my town,” she said in an interview last week.

A unique family needs a unique town. Enshané, a Columbus native, went to Japan in 1996 to teach English after college and became fluent enough to stay and work, mostly in the area of Kochi on the island of Shikoku. She worked as an English teacher in Haruno and Tokyo, then as a wedding assistant in Nagano Prefecture and a local TV news host in Haruno. Then she headed back to Kochi, where she started her own business as a wedding singer, when the gospel boom was popular in the big cities around 2002–03, she said.

“I’m not a singer, but I’m black, I’ve seen Sister Act, and I can do the whole sound track,” she said, laughing at herself.

When the hype over hip quieted down, she reinvented herself yet again by opening a private English school in Kochi City.

And while he worked for the government in the town where he grew up, Yukio, who wears his hair long, has been divorced, plays in a rock band and drives a motorcycle, was no less unusual for the socially conservative culture he comes from.

Though Kochi worked for them, the couple wanted their two boys to have more international exposure than they were getting in Haruno, an agricultural town of 15,000. And she also wanted them to know their American family. So after looking everywhere but, she came back home to attend Ohio State’s Fisher College of Business Graduate School for human resources and by May 2009 was looking to permanently relocate to the Dayton area.

But where in southwest Ohio do people raise their children to be global citizens in the kind of community Yukio came from in Japan? They wanted everything: small, rural, diverse, open minded, progressive, safe and close to work. And they wanted a place where people know each other and care and look out for one another, Enshané said.

“When we left Kochi we were leaving a family, and we wanted to be able to find a place that had the same kind of bonds,” she said. “To find something that fit every one of those categories — there’s nothing to say except that it was supposed to happen.”

Both boys and Yukio came not speaking any English at all, but now, just over a year later, both boys, Yukim, a fifth grader, and Yukaiyo, a fourth grader, speak perfectly. And while Yukio, 57, is much more challenged to pick up his second language, he has found no problem plugging into the community through other means such as the local rock band Liar Ghost, in which he played guitar at Blues Fest last month with John Brennan, David Day and Kyle Truitt.

And while Kochi is a relatively small city in Japan, in this little Ohio town, there are two Japanese residents who hail from that very city. The Nomotos met one of them, Keiko Hergesheimer, over the summer when Keiko was walking with a relative visiting from Kochi who saw Enshané and recognized her from the local television news program.

“I was like, ‘What?! How does that happen?” Enshané said.

Having other Japanese friends in town does create a sense of belonging for the Nomotos, but Yukio is studying English and he gets what he needs done with the words he has, he said through Enshané’s translation. He only occasionally feels frustrated at not being able to express his deeper feelings in English. And he is satisfied that his sons are happy here.

Both Yukim and Yukaiyo attend Mills Lawn, and live next door to two of their good friends, as well as others in the neighborhood, they said. Yukim likes his Yellow Springs school just great, he said, but finds that the Japanese school he attends in Columbus every Saturday is much more taxing.

As a family the Nomotos feel settled in a community they have built trust with. They explained the feeling in Japanese as, “heiwa boke,” which sort of means that they are comfortable enough to let their guard down and have the community come into their lives.