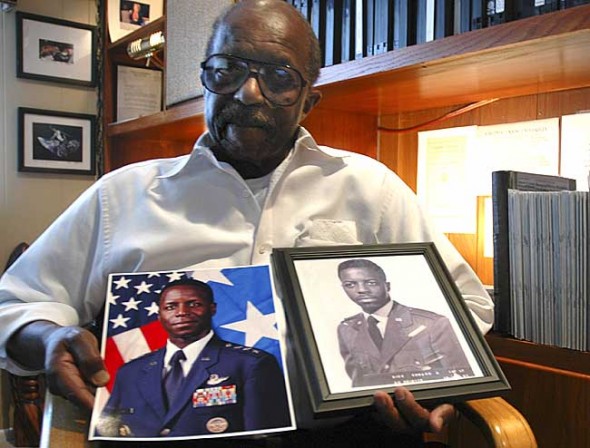 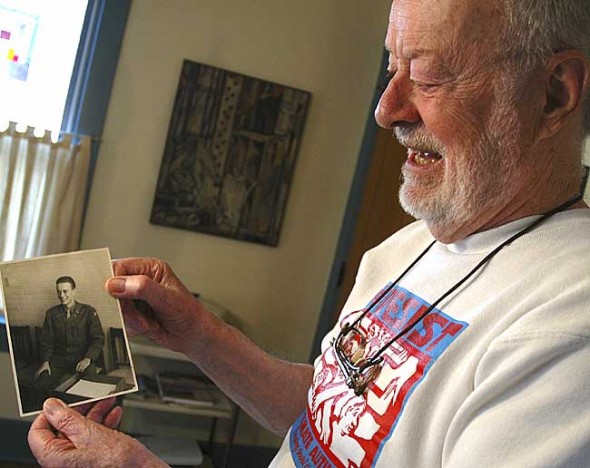 Korean War veteran Edward Rice, left, holds a photo from his service in the Air Force in the early 1950s and a current photo of his son, Edward Jr., who will be promoted to a four-star general next week. Veteran Gordon Chapman looks at an old photograph from his service with Army intelligence in post-World War II Japan, where he monitored mail communication. (photos by Megan Bachman)

Next week, Yellow Springs native Edward Rice Jr., a 1974 graduate of Bryan High School, will be promoted to a four-star Air Force general in a ceremony in Texas. Since February 2008 he has been commander of the U.S. Forces Japan and the Fifth Air Force, where he is both the senior U.S. military representative in Japan and commander of U.S. Air Force units in Japan.  Rice will be reassigned as commander of the Air Force Education and Training Command at Randolph Air Force Base near San Antonio.

The U.S. Senate approved Rice’s -promotion to full general last spring. When the promotion becomes official, he will be the only African-American four-star general in the Air Force. While at the Air Force Academy, where he graduated in 1978, Rice was the first African American to head his class of cadets.

“His whole career has been a first,” said his father, Korean War veteran Edward Rice, who lives in Yellow Springs. “When you’re in the military or in life, as an African American if you scale the vertical line you’re probably going to be the first.”

A command pilot with more than 3,800 flying hours, Rice has also been the vice commander of the Pacific Air Forces, commander of the 13th Air Force in Guam, commander of the Air Force Recruiting Service, and has served during two different presidencies at the White House, in the Department of Health and Human Services and on the National Security Council.

On his  last day of high school, the future general told his father that he was going to the Air Force Academy instead of Princeton. He ended up marrying his junior high school sweetheart, the former Theresa Ford.

“Being a military person myself I understand what it takes to progress in the military,” the elder Rice said. “Every morning I wake up and I feel proud [of Edward].”

For those who saw military combat or served in the U.S. armed forces, Nov. 11, Veterans Day, is a time to remember the often painful memories of war and to honor their comrades who did not make it home.  As the local veterans who live and work in Yellow Springs reflect on wars that changed their lives, they find solace in each other.

Disabled vet J.K. Lourens, who lives in the village, spends each Veterans Day at the Veterans Memorial Park in Springfield.

“It brings tears to my eyes being around my fellow veterans,” Lourens, an Army veteran said. “Because you’re honoring each other.”

While stationed in West Berlin on a peacekeeping mission in 1969, Lourens lost his left arm in an explosion when old ammunition ignited. He spent nine months with serious infections in military hospitals, including Walter Reed Army Medical Center, where Lourens recalls watching planeloads of injured soldiers brought in daily from Vietnam, many of whom would be crippled for life. To him, these are the veterans we should most remember.

Lourens, who came home alone and struggled to find a job, remembers the discrimination many Vietnam veterans faced when they returned. There were no parades, Lourens said, adding that veterans are more respected today.

People have only now just begun to thank Vietnam veteran Larry Campbell for his service — gratitude that is, “a long time coming, but well worth the wait,” he said.

“I kept a low profile coming back because of the way I was treated by those my own age,” said Campbell, a Village police dispatcher and Marine who spent a year in Vietnam. The experience forever changed his life.

“War gives you a whole different outlook,” said Campbell, who found himself in basic training just five days after graduating from Greenon High School in Springfield. “You tend to be more serious and it makes you a lot more tolerant of other people and their differences.”

“It serves to mature you — it makes you become an adult,” said local Vietnam veteran Pete Banner, a former Air Force medic. As part of the American Legion, Banner honors his fellow veterans at regular graveside services where he participates in a 21-gun salute and presents the deceased veteran’s next of kin with a folded American flag.

“They deserve a final rest.” Banner said. “I don’t think they get their proper respect in the community.”

Former Antioch professor Martin Murie lives daily with the reminder of his service in World War II, having lost his right eye in the mountains of Italy. Like many veterans, he finds his memories difficult to live with.

“I keep meeting veterans and we don’t talk much about the war — it’s just too painful,” he said.

After stays in various hospitals after the war, Murie had to hitchhike and hop freight trains to get back home to Wyoming, where he gave the Purple Heart he was awarded for his injury to his mother. He also received a silver star for killing an enemy machine gunner, who was firing at his comrades, with one shot from his M1 rifle.

Murie studied philosophy and literature at Antioch on the GI bill and later became a professor. Now he’s an anti-war protestor and member of Veterans for Peace.

“For the rest of my life — I can’t forget it, and that’s why I go to Yellow Springs every Saturday and I really am a vehement anti-war veteran,” said Murie, who commutes from Xenia to attend a weekly peace protest in Yellow Springs. “War is not the answer, we just can’t go on with it.”

Lourens said he attends the Saturday protests at Xenia Avenue and Livermore Street to “make people aware that war causes more problems than it solves.”

Local resident Gordon Chapman, another Saturday protester, said he became conflicted about war after witnessing the devastation of nuclear weapons and incendiary bombs in Japan while an Army military intelligence officer there just after World War II. Having grown up in Japan, the child of missionaries, he had enlisted toward the end of the war in hopes of liberating the Japanese people. Instead, he found himself re-examining his assumptions about the U.S.’s role in the world and went on to oppose wars in Korea and Vietnam and participate in Veterans for Peace.

“Our homes, churches, school were totally plastered,” said Chapman, who was sent to his home province in Japan. “I was really a hawk before seeing all of this devastation.”

Korean war veteran Edward Rice experienced similar devastation. Part of the Air Force, his first office in Korea was in a bombed-out schoolhouse that looked as if a tornado had just blown through it. The cruelty greatly affected Rice, who lamented that the Korean War is far less remembered than other wars.

To Rice, the respect for the military today is mixed.

“It’s not like World War II when everyone was ‘rah, rah, rah’ for military,” Rice said. “Some people feel [the military] shouldn’t exist, but it’s a necessity for the country.”

Rice is proud that his son, Edward Rice, Jr., a 1974 graduate of Bryan High School, serves his country in the U.S. military. Next week Rice will travel to Texas for a ceremony for Edward Jr., whose promotion to four-star Air Force general was approved last spring by the U.S. Senate. (See sidebar on page 1).

Lourens spent four months last winter at a VA hospital comforting soldiers injured in Iraq and Afghanistan. Along with the disabled soldiers he witnessed at Walter Reed 40 years ago, it is these veterans who will be on Lourens’ mind this Veterans Day.

To Campbell, the heroes are those who never made it home.

“I’m no hero — I never was, I never will be,” Campbell said. “The ones who died were the heroes, the rest of us are just survivors.”