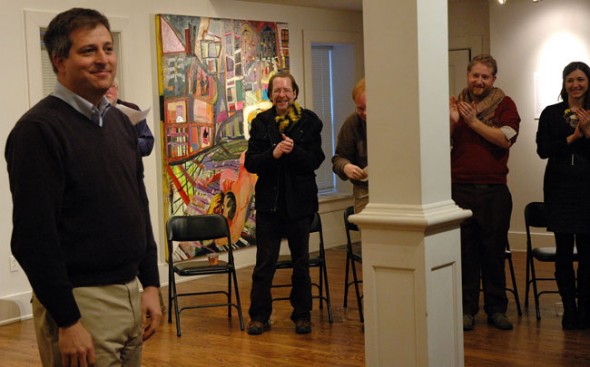 Antioch College interim president Matthew Derr is humbled by an outpouring of support from staff and supporters at a reception held in his honor last Thursday. (Photo by Megan Bachman)

A farewell to Matthew Derr

At a reception for departing Antioch College interim president Matthew Derr last week, college staff praised him for his patience, unswerving leadership and unflagging optimism for his role in alumni negotiations to purchase the college from Antioch University and in leading the revived institution in its first year as an independent college.

“It was his compassion to listen to all sides and make creative informed decisions,” that made Derr successful, according to Antioch’s chief financial officer Tom Brookey. “And he had a great vision for the college.”

At the reception, held last Thursday at Herndon Gallery in South Hall, Derr was commended by college staff for everything from his e-mail responsiveness and bow ties to his hands-on style and loyalty to his employees.

“He knew this place like the back of his hand,” said communication director Gariot Louima. “It wasn’t just a business to him – it was a place of love and his employees felt that.” 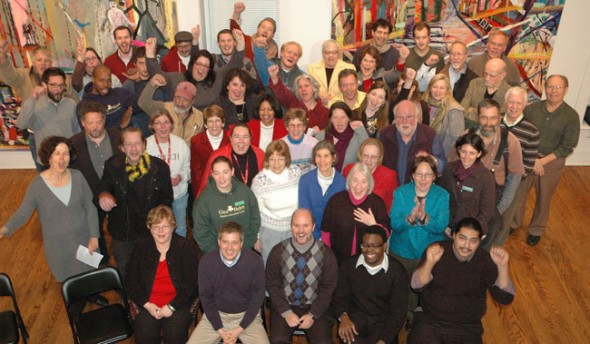 College staff and community supporters also sang a version of the alma mater with lauding Derr —“You fought the fight with strength forthright/Some call you Antioch’s white knight.”

Derr will continue to help Antioch gain accreditation and develop fund raising strategies from his new position at the Great Lakes College Association in Ann Arbor, Mich., where he will begin a two-year visiting fellowship.

In October, Derr received the Council for Advancement and Support of Education’s Executive Leadership Award, given annually to an education executive in the six-state district for his efforts saving the college from permanent closure and modelling outstanding advancement work, according to award administrator Teresa Exline in a statement. (Read more on Derr’s award)

See the Dec. 16 issue of the YS News for full coverage of Derr’s farewell reception.

One Response to “A farewell to Matthew Derr”