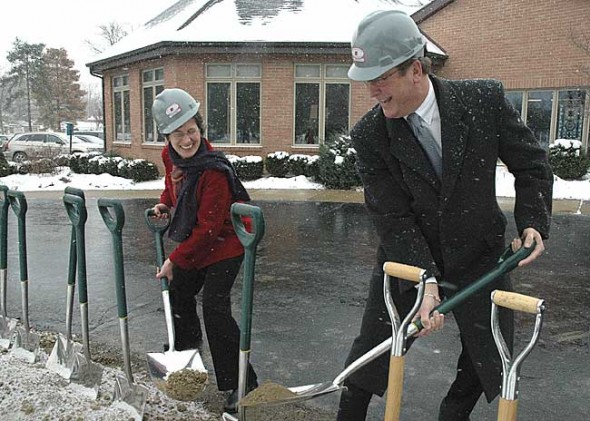 At a ceremonial groundbreaking on Monday, Friends Care Community Board President Mary White and Director Karl Zalar raised their shovels to the new $2.25 million rehabilitation wing being built at the facility.(Photo by Megan Bachman)

Friends Care Community officially broke ground on Monday on a $2.25 million rehabilitation wing at its Herman Street campus. It’s the latest expansion for the 30-year-old nonprofit, which provides skilled care, assisted living and independent living for elders. Mary White, the Friends Care board president, said the new wing will help to ensure that the needs of an aging local community are met.

“Yellow Springs is aging faster than the rest of the country and the needs of seniors in this town are growing,” White said. Because more villagers are undergoing hip and joint replacements or are recovering from strokes or other ailments, there is a greater need for short-term stays in rehabilitation facilities and for the inpatient and outpatient therapy those patients need to recover, she said.

The new 14,000-square-foot wing, part of which is being remodeled from the existing facility, will have a separate entrance, 16 private rooms with a bathroom and shower in each, an Internet-connected dining room, a lounge and a new therapy and fitness area which current residents can also use. Occupational therapists and specialists will be on hand to help new patients recover and to meet the needs of existing residents.

Though intended to “enable villagers to receive a broad array of rehabilitative services without leaving town,” according to a press release, the new facility will also help Friends Care compete in the regional market, since shorter hospital stays means long-term care facilities are taking on many services once provided in hospitals.

“To keep people in their homes strong and healthy is an integral part of long-term care places everywhere,” White said. “I see Friends Care as always needing to adapt to needs of the village and the economic environment.”

The expansion will also keep the organization financially sustainable in the face of possible additional reductions to its reimbursements from Medicare and Medicaid. Already Medicaid reimbursements, which nearly all of the center’s current residents rely on for payment, have been cut by about $16 per resident per day, according to Friends Care Director Karl Zalar. Though extended care will remain Friends Care’s priority, a mix of health care services, including rehabilitation for all ages, will help to generate the revenue needed to maintain the rest of the campus, he said.

“This is an opportunity to have excess revenue to put back into the organization,” Zalar said. “We have to maintain the organization through operations — we can’t rely on [reimbursements] for the future.”

Friends Care recently put on hold plans to build senior apartments in the community due to a difficult economic climate that threatened the affordability of the units and may have put the organization at risk, Zalar said. In contrast, the rehabilitation project will make money for the organization, expand services for current residents, strengthen its Herman Street campus and is closer to its mission.

With the majority of the funding for the new facility coming from conventional financing, Friends Care is also using $300,000 from its reserves and soliciting $350,000 from its board and the community. Donations will be used to purchase state-of-the-art equipment for the therapy room, including an ultrasound and an electrical stimulation machine, to furnish patient rooms and offset construction costs. So far the board has pledged nearly $35,000 and the Yellow Springs Community Foundation will provide a matching grant of $30,000 once $170,000 has been raised.

Though somewhat reliant on community support, being nonprofit has allowed Friends Care to focus on caring for residents rather than making a profit for shareholders. The nonprofit has additionally been able to use surpluses for capital improvements and future expansions and maintain a larger staff, Zalar said.

Being independent has also meant Friends Care can preserve its Quaker philosophy of respecting each individual’s needs, explore holistic wellness approaches like yoga and acupuncture, and respond quickly to new opportunities, Zalar said. For example, the idea for the rehabilitation center was aired just a year ago, approved this June, under construction by December and will be completed by next July.

“It’s very visionary, progressive and innovative and is an organization that just does what it needs to,” Zalar said of Friends Care.

In addition to being given a five-star rating from the Center for Medicare and Medicaid Services, a rating only 5 percent of such facilities in the U.S. achieve, Friends Care’s staff turns over about half as fast as that of a typical nursing home, he said. And its consistency of staff and small size, at 66 beds, means people get to know one another. Despite the difficulty of being away from home and living through some of the toughest years of their lives, many of its residents are grateful they stay in the community, White said.

Based on an idea of former Antioch College president Arthur Morgan to provide housing for villagers as they aged, a group of village leaders began raising money for Friends Care in the late 1970s, after Morgan’s death, and began construction of the 50-bed skilled care facility in 1980. The effort was led by the local Quaker Friends Meeting, which still elects six of Friends Care’s 11 board members. The facility was expanded to 66 beds in 1984, an assisted living center with 20 beds was built in 1999 and 14 independent living units were added in 2002. Today, residents of Yellow Springs and their family members occupy 54 percent of the skilled nursing units, 35 percent of assisted living units and 72 percent of independent living units.

White said she believes the new rehabilitation facility will strengthen Friends Care so it can to continue to meet the needs of villagers.

“It’s incredibly necessary for Friends Care to serve and be here for the future of Yellow Springs — I can’t imagine the community without it,” White said. “Yellow Springs is our constituency — that’s our priority.”