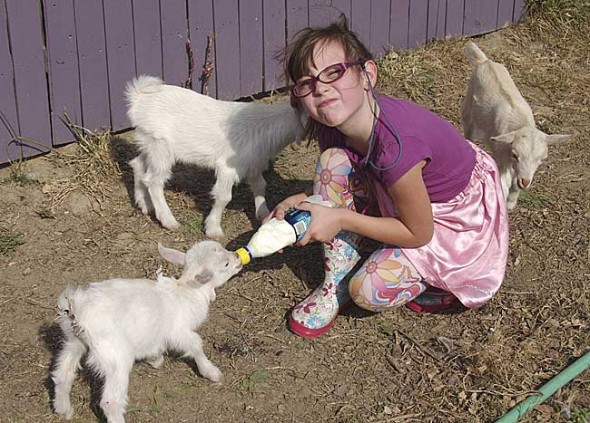 Sophie Entler and some of her hoofed friends at the Purple Moon Farm, which her parents, James Entler and Jessica Wyant, run on Meredith Road.

On a recent afternoon, the sheep and goats at Purple Moon Farm are dozing in their pens. A hen wanders by, two middle-sized chicks close behind her; other chickens rest in the shade of the raspberry bushes planted in parallel rows. A black hog, Gaga (named after a certain pop star) ambles over to say hello, though technically, she should be in her pen.

“The rams broke down the fence,” said James Entler, standing on the west side of his family’s land.

Entler and his wife, Jessica Wyant, and children Zachary, 19, and Sophie, 7, homestead this three-acre plot on Meredith Road north of Yellow Springs. They named it for the August full moon, during which the berry crop has reached its zenith. Entler and Wyant rented the future Purple Moon in 2003 and purchased the land in 2005. They primarily grow food for themselves, rather than producing commercially, though when they have surplus they take it to the Yellow Springs farmers market.

“A few years ago, after the birth of Sophie, we made a decision that rather than returning to a full-time job, Jessica would supplement our household income by working to grow our own food and reduce our grocery expenses,” said Entler.

Both Entler and Wyant had grandparents who were farmers, and childhood memories of eating meals that came fresh from the garden or from Mason jars. Unfortunately, at the time, they didn’t recognize the importance of these things, Entler said, and now they are seeking to regain the lost skills of past generations.

The couple makes an effort to farm “without the fossil fuel impact,” integrating the land’s needs with its functions as much as possible. The animals graze the grass, eliminating the need for mowing, which saves labor and fuel.

“In nature there’s no such thing as a waste,” said Entler. “Each year we adapt by adding a few new trials and dropping anything if we feel that the energy expended did not match the benefit obtained. Everything’s in progress…we’re trying to find out what works well for us.”

This year they raised raspberries, blackberries, strawberries, tomatoes, peppers, beans, peas, garlic and basil in their garden, and tended to a group of animals that includes several breeds of chicken, Narragansett and Red Bourbon turkeys, Nigerian Dwarf and Nubian goats, dairy sheep, and two varieties of small hogs. The animals they raise are generally of “heritage” breeds: animals that were previously raised before the rise of commercial agriculture and the proliferation of high-density commercial farms where livestock feed mainly on corn and soybeans.

“We’ve traveled all over the country to get the genetics we have here,” Entler said. In turn, he and Wyant are “more than happy to place our animals in other homes where they can breed.”

Entler and Wyant aim to further breed their animals for selected characteristics. In the case of their dwarf goats, for example, it’s currently “hard [to milk them] with the miniature teat.” In the spring they plan to cross their Nigerian dwarf goats with a larger Nubian.

Their two Guinea hogs and two hybrid mini-pigs will grow to a smaller size than that of the average hog raised on a commercial farm, since they are “not bred to fatten up on corn,” Entler explained. In fact, as natural omnivores, pigs fatten up “on their own,” which leads to the notion of “pork alchemy.”

“Pigs will eat anything, so everything turns into bacon, sooner or later — it’s like transmutation,” said Entler. (Their current pigs are intended for breeding, and won’t be turned into bacon.)

The dairy sheep, which are milked by hand, currently yield more milk than the goats; the family has used it to make yogurt, cheese and ice cream.

“The sheep get really personable with you and they’re almost like dogs, they’re pets,” said Entler. Conventional wisdom holds that sheep are dull, but in fact, Entler said, they’re quite intelligent.

In addition to their yield of sheep’s milk, goat’s milk, chicken and turkey eggs, Entler and Wyant also sometimes butcher poultry for meat. Entler said he and Wyant, who have both been vegetarians in the past, have considered the ethics and sustainability of meat-eating carefully. They have reached the conclusion, Entler said, that it is acceptable for them to eat the animals for which they have provided a happy, secure existence, longer than they would likely endure in the wild.

“You’re not going after them with the aggression of a killer, you’re harvesting with a very reverent attitude,” said Entler. They slaughter the chickens themselves, rather than sending them to a processor. “It’s not my favorite job…but if I took the easy way out, it would be more stressful for them. We try to take responsibility for it,” he said.

Between their yield and food bought at the farmers’ market, Entler said the family is now eating about 75 percent locally. “We’re not dogmatic about it, but we’re directional about it,” said Entler. “I think we’ll get better and better — for one thing we’re building soil,” he said, noting that they are happy to accept leaves for mulching. They hope to add more perennial crops to their garden, and have been planting fruit trees; next year they should have pears in addition to the cherries they harvested this season.

Entler said Purple Moon keeps the family on their toes. “We’re always busy here — a lot of it is logistics,” he said, noting that Wyant oversees much of the day-to-day running of the farm. Still, they find the time they spend working on their homestead rewarding.

“We love the learning part of it,” he said, and “keeping it as hands-on as possible.”

Both Entler and Wyant wear multiple hats — Entler has a full-time job and Wyant home-schools their children — and the homestead must coexist alongside the other demands on their time. “If retirement plus [Purple Moon] would support me that would be great,” Entler said, but they plan to let the farm develop at its own pace.

“This is our version of the family garden, you know?” said Entler. “We try to make use of the land rather than just mowing all the time. There are no critical goals except to learn and do better.”