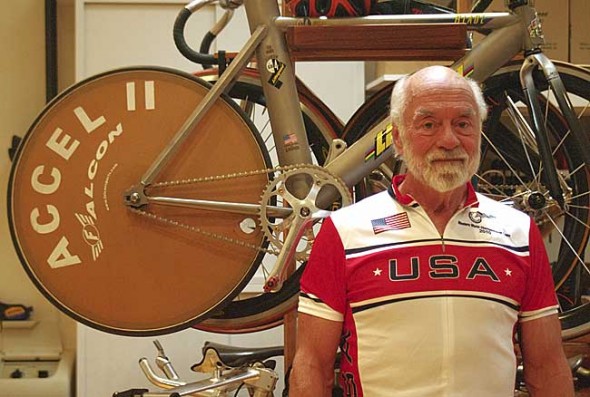 Richard Simons, shown above, recently retired at age 77 from competitive bicycle racing, in which he won many titles.

“Whether you think you can do something or not, you’re probably right.” With this paraphrase of a quote from Henry Ford, 77-year-old champion cyclist Richard Simons sums up the attitude he credits with earning him scores of race victories and multiple world records. Though just retired from competing, he intends to continue challenging both his body and mind and putting Ford’s assertion to the test.

Simons didn’t begin racing bicycles competitively until age 60, but he was involved in sports from an early age. He developed a penchant for competitive excellence while growing up in Springfield, “a community that stressed success in sports,” he said. As a high school student he ran track and played basketball, football and tennis, and continued to play tennis at Ohio State University. A dedicated scholar and musician, Simons received a doctorate in music and subsequently taught the subject at Antioch College and Wright State University from 1960 to 1971, after which he moved to Chicago and became an editorial director in music publishing for children. He and his wife Louise returned to Yellow Springs in 2008.

Simons continued to play tennis until he turned 50, at which point, he said, joint pain began to slow him down. At 60, he was looking for a new activity. “I [didn’t] know anything about bicycle racing,” he said. “I went to a race, it went very well. [He thought], ‘I’m going to get a faster bike, train, see what I can do.’”

Simons proceeded to set “all the U.S. records for the 60-plus age group” in masters’ cycling, then all the records for the 65-plus age group. Eventually he also set numerous records in the 70-plus and finally 75-plus groups. In total, the five-foot-six-inch Simons holds 17 championships from the United States Cycling Federation (USCF), an organization overseen by the United States Olympic Committee; approximately 20 American Bicycle Racing championships; and two world championships earned from a group called the Union Cycliste Internationale, organized by the International Olympic Committee (IOC).

He set his latest world record in the USCF’s Men’s 75-Plus 2K (2000 meter) Pursuit on Sept. 1 at a Frisco, Texas, velodrome. Simons raced against a timer, riding a special bicycle with no brakes and no gears on a steeply banked track. (A velodrome track is inclined because “on a flat track at that speed, you couldn’t go around corners,” he explained.) He completed the eight laps in 2:59.915 seconds, 7.585 seconds faster than the previous record.

“What I did then was to ride faster than any human being has ever gone in the U.S.” in that age category, he said. To call it a strenuous effort would probably be an understatement: while riding “you can’t breathe, you’re struggling to get every molecule of oxygen,” said Simons.

Though happy to have won the record, Simons was disappointed that he didn’t make the speed he’d achieved earlier in the summer at the Kenosha, Wis., velodrome, where he finished the distance in only 2:54.9 seconds. It may seem surprising that Simons would have regrets about a race that won him another world record; yet, if his approach were not seriously competitive, he might not have grocery bags full of medals in the home studio where he trains.

Attitude wasn’t the only factor in his success.

“I’ve got a killer motor,” he said, displaying impressively knotted leg muscles. “So the genetics were there.” Also, he said, “Louise stood behind me on everything. She was always supportive…she was fabulous. I also had the good fortune to meet some other good cyclists,” who graciously helped him build his cycling career.

At the time when Simons played sports in Springfield, losing was considered a failure that came with some measure of shame.

“If I didn’t win I felt bad about myself,” Simons said. As an adult, he’d feel “depressed” at losing tennis matches. “When I came to cycling I had no expectations…so being good was easy for me in a way.”

If Simons grew up with a “win or else” attitude, he doesn’t pass this on to the several athletes he currently coaches. When they lose, he asks them, “What did you learn today?”

While continuing to help his students improve their technique, Simons decided to stop racing competitively himself because “at this point training is discipline…not love. I don’t like my attitude too much,” he said.

Preparing for races can be “murderous,” and “some of it’s just physically unpleasant…your legs are on fire.” He doesn’t want to over-tax his heart, which has undergone five angioplasties and the implantation of two pacemakers in the last few years. (Simons noted that he “wouldn’t be be alive” if not for his “extraordinary condition,” as it caused “collateral branching” in his cardiac arteries that, he said, saved him from a heart attack.)

“If you had a wonderful old auto, would you red-line it? I don’t think you can demand from your body extreme performance. I could back down, but I want to see optimal performance,” he said. “This wraps up this part of my life, this chapter of cycling.” Of his world championships, he said, “I thought that was high accomplishment…it’s not that I’m proud of it, but I’m very pleased with it.”

For Simons the regrouping that comes with retirement presents its own challenge. “It’s been a real transition and I’m not comfortable with it,” he said. “I’ve always been so goal-oriented throughout my life. I don’t know what I want to do now. At 77, that’s kind of a void. I always need to find something, but maybe now I can relax.”

If you spot a tandem bike whizzing down Grinnell Road, you may be witnessing Simons in one of his “relaxing” activities. Simons rides with Kelly Hall, a friend from the Yellow Springs Chamber Orchestra, in which they both play.

Simons hopes the record of his achievements encourages others to pursue their own challenges, even where success doesn’t seem likely or obvious.

“If you think you can do something, you’ve at least got a shot at it,” he said. “I’d like to inspire people to be active as long as they’re alive, intellectually, or something physical. To not be physically fit is very disappointing for a person.”

“I don’t think sports are just for the young. I think they’re for everybody,” he added.

*The writer is a freelance employee of the News.