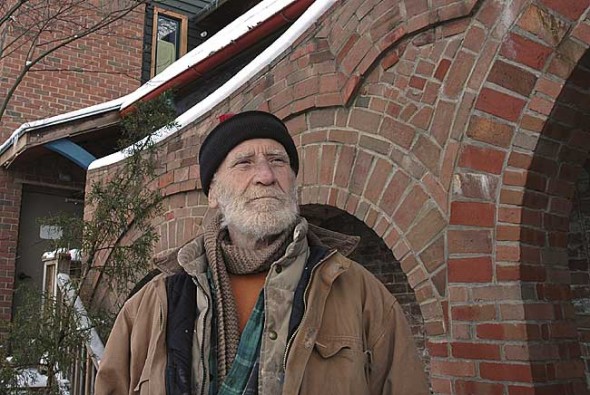 After several decades of creating art with the bricks and mortar at his Xenia Avenue Oten Gallery, Alan Macbeth is putting his building on the market. The Yellow Springs Arts Council resides in part of the building, and the Asian Collection rents another space. MacBeth lives in a basement apartment. (Photo by Lauren Heaton)

Macbeth offers up the Oten for sale

The brick archways of the Oten Gallery have been a labor of love and obsession for Alan Macbeth, the owner and creator of the distinctive structure on Xenia Avenue. For nearly 40 years he has expressed his affinity for solid organic materials and gracefully curved lines through tweaks and additions to the building where he lived and made his livelihood. But after several years testing the sound of his voice saying he feels ready to sell, he is sure that he is no longer in a position to steward his master work.

The original brick and white oak structure was built by a local doctor sometime “before Antioch,” according to Macbeth, who purchased it shortly after coming to the village in 1964. He had just left the art department at Ohio State University, where he excelled during studio time but hated the academics, and the thought of owning an art gallery in Yellow Springs appealed to him. With help, he purchased the old home with a traditional front porch and started the life he dreamed about.

“I was a lucky boy, and I didn’t do this by myself,” he said of the financial assistance from his family in Chillicothe. “I’m not that kind of hero.”

For about 15 years through the 1970s, Macbeth ran a framing and art supplies business out of the home, where he and his wife and daughter, Molly, lived. Then he sold the framing business to Ken Simon and leased the space to a series of cafes, including Iko’s and the Harmony Cafe, run by a couple of Yellow Springs High School graduates who made tasty felafels. Macbeth worked on his oil and acrylic portraits until one day Russell Jones, a local mason and friend, delivered to him a pile of bricks. It was while working with bricks to lay out an elevated front patio that Macbeth discovered his true identity as a sculptor. His drive to tame the hardened red clay into a delicate form that was easy to look at and felt comfortable to be in consumed him for the next 30 years.

In 2000 a fire burned the entire Oten structure to a blackened crisp. While no one was hurt and much of the brick was saved, Macbeth spent years cleaning up and rebuilding what he lost. Many community members helped him, especially Curtis (Bliss) Rule, Tony Seimer and Chino Almanzar.

“I had three places to sleep that night,” Macbeth said of the first night after the fire. “People were good.”

What he rebuilt was bigger and incorporated more wood craft in the living spaces.

The .12-acre property bordered by Speedway and the Barr property is currently being leased for several different purposes and offers an array of income that currently supports Macbeth, who lives in the basement apartment he sculpted out of limestone and wood. The Asian Collection and the Yellow Springs Arts Council divide the front and back spaces, while an individual occupies the upper apartment. Macbeth is finishing a space in the basement adjacent to his apartment that could also be rented as office or studio space. All told, the building offers seven separate spaces that could be rented for a total of $3,400 per month to generate a potential $34,600 a year. According to the Greene County Auditor, the property costs $3,400 in annual property taxes.

The building would still need maintenance, and that is perhaps where Macbeth could help. He and his dog Po are still very comfortable in their home in the basement, and Macbeth doesn’t quite feel done with the brick. He envisions adding four more arches on the south side of the front courtyard, which could take several more years to complete, he said. If he stayed there, he could maintain the building he knows so well while working to finish his piece.

Macbeth’s grandfather was an architect from Scotland, who Macbeth thinks may have helped to refurbish part of Skibo Castle during the time that Andrew Carnegie owned it for most of the 20th century. His father had a smaller scale infatuation with a garden he tended, and Macbeth believes that perhaps his attachment to creating beauty out of organic materials is genetic.

As Macbeth aims to design by the laws of nature, so must he live by the laws of economics. At 74 he has come to a place where the building is becoming more of a burden than he cares to undertake. He named his first business Oten Gallery, which he learned from his roommate at OSU is the Nigerian expression meaning “to set up shop.” Now it’s time for someone else to set up shop in his space, Macbeth said. Perhaps if he is lucky, he can help keep it beautiful.