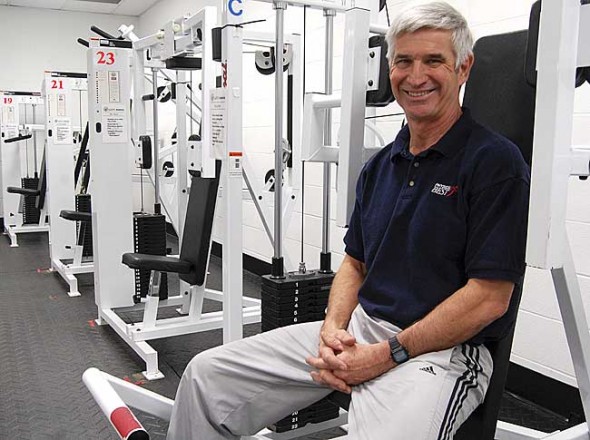 Retiring Yellow Springs High School teacher Kevin O’Brien hopes that he inspired students to commit to lifelong fitness as he worked to create a strong physical education program in the Yellow Springs School District. The physical education and health teacher, who retires this Friday after 33 years with the district, became a leader in his field as he trained teachers around the state, contributed to a textbook, helped to write state curriculum standards, served as an officer of his state professional association and twice was recognized as a teacher of the year.

“I enjoyed encouraging students to see fitness, physical activity and health as a worthwhile pursuit and a lifelong goal,” the 55-year-old O’Brien said in an interview last week.

O’Brien credits his continuing education, which, he said, the school administration always encouraged, as the reason for his successful career.

“I’ve always enjoyed staying current with the trends in our profession through professional development,” he said.

The Xenia native and Carroll High School football player initially studied physical education at Eastern Kentucky University so he could one day coach high school football. But by the time O’Brien returned to the area with a masters in physical education from the University of Arizona in 1978 and was hired by Yellow Springs, his love of fitness and health was predominant.

“I found it difficult to devote time to be a good teacher and a good coach, so I focused on the teaching and I’m glad for that,” O’Brien said.

O’Brien concentrated on outdoor activities and experiential education, such as the School Forest program, which he ran for 12 years, as well as rafting, backpacking, archery, inline skating, bicycling, ropes courses, racquetball and swimming. Once, he brought a climbing wall to the high school and students not only learned climbing skills, but physics and math lessons as well. O’Brien’s experiential approach was on the leading edge of his field.

“Physical education at the time was a team-sports oriented curriculum, with a focus on sports like basketball,” he said. “The curriculum began to move to more lifetime fitness and individual,” which O’Brien said he learned in his masters program and by attending workshops at state and national conventions.

Physical education was no longer just for athletic students, the so-called “jocks,” O’Brien said, and teachers were finding ways for all students to learn and improve by developing more individualized curriculum, teaching a variety of fitness and sports activities like badminton and tennis, yoga and kickboxing, and training students to plan their own fitness routines. His efforts were helped by a new $80,000 fitness center with treadmills, stationary bikes, weights and more that O’Brien secured for the high school through a national foundation grant with assistance from McKinney School physical education teacher Sarah Lowe.

“The gym is like a lab, you learn and get in shape for the semester, but also get the tools and motivations to continue this,” O’Brien said. Colleagues Lowe and Jutta Galbraith at Mills Lawn, who both started teaching at about the same time as O’Brien, incorporated this new approach to physical education, a discipline that previously had little structure, across the entire district.

Having helped transform physical education locally, O’Brien soon began having a larger impact on his field when he was trained in 2002 to teach other physical education teachers across the state in a program financed by the Ohio Department of Education. Called Physical Best, the program focused on lifetime fitness activities, already O’Brien’s specialty.

After training nearly 400 teachers across Ohio, O’Brien then presented at the 2002 state convention of the Ohio Association for Health, Physical Education, Recreation and Dance, or OAHPERD. He then co-chaired the following year’s convention, held in Dayton, and subsequently was selected as the Ohio High School teacher of the year by OAHPERD in 2004, which earned him many more speaking invitations.

“It’s really great to be recognized for the things you had done, especially since it’s from your colleagues,” O’Brien said of the award.

O’Brien was also invited to help deploy the Physical Best program nationally by writing several lesson plans for a book published by Human Kinetics in 2004. He contributed activities in yoga and cardio-kickboxing and wrote sections on how to measure aerobic intensity and determine starting weights.

In 2004, O’Brien was elected to a two-year term as vice president of OAHPERD, where he helped to start a program training college physical education majors to be leaders.

O’Brien’s most prestigious recognition came in 2007 when he was honored as Midwest Secondary Teacher of the Year by the National Association for Sport and Physical Education. He was one of five teachers nationally bestowed with the honor, which led to speaking invitations across the country.

O’Brien’s final presentation was at the national convention of the American Association of Health, Physical Education, Recreation and Dance in 2008, where he and his wife, Becky, a teacher at Mills Lawn for the last 12 years, gave a workshop for teachers on how to introduce yoga in their classes.

By now recognized as a leader in his field, O’Brien was asked in 2008 to advise in the development of state curriculum standards in physical education, as Ohio was one of two states lacking standards. O’Brien’s service on the advisory committee ended last year, when state standards were finally adopted, a battle that O’Brien had been fighting for years as a member and vice- president of OAHPERD.

But looking back on his career, what pleases O’Brien the most is the supportive students, teachers and administrators in Yellow Springs.

“I have always appreciated Yellow Springs students’ willingness to try new experiences and be supportive of each other — I’ve admired those qualities in our kids,” he said. “And physical education and health has been treated as an equal discipline by staff and the administration.”

O’Brien will continue a lifetime love of fitness and wellness in retirement, with plans for more hiking, bicycling and kayaking with Becky, who will keep teaching sixth grade at Mills Lawn. The couple plans to ski with their adult children in Colorado while O’Brien will also put to use the snowshoes he got for Christmas.

After more than three decades of teaching physical fitness, O’Brien’s advice for how to stay fit is simple:

“People always ask me what’s the best sport or activity. And it’s what you like the best — the one you’re going to do,” he said.