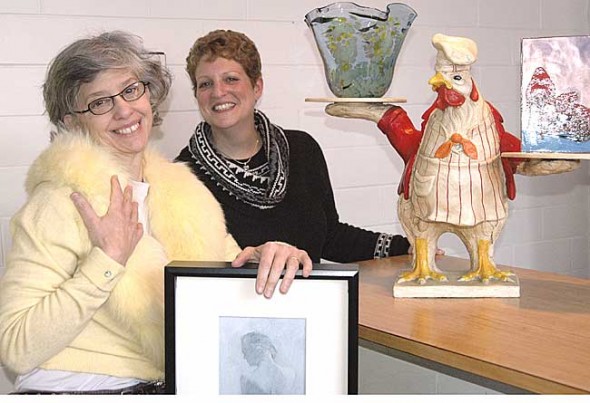 The annual WYSO Public Radio silent auction and wine and cheese fundraiser will take place next Saturday, Feb. 12, at 6 p.m. at the Nutter Center in Fairborn. Shown above are General Manager Neenah Ellis modeling a yellow cashmere sweater with a fur collar, and Business Manager Jacki Mayer standing next to a chicken-shaped server, another unique donated item. A bounty of experiences, events and items will be auctioned off, including a hot air balloon ride and a guided trip down the Little Miami River. (Photo by Lauren Heaton)

A Unique auction for a unique station

To raise money for the station, WYSO will host its fifth annual silent auction along with a wine, chocolate and cheese tasting at 6 p.m. Saturday, Feb. 12, at Wright State University’s Nutter Center. Tickets are available online through Feb. 11 at a cost of $35 per person and are $40 at the door. Guests will be treated to wine from the Winds Cafe, cheese from Young’s Jersey Dairy, chocolates from Winans Fine Chocolates and Coffees in Troy and food from Current Cuisine.

“WYSO is a community and the auction is a way to meet other listeners and supporters,” said General Manager Neenah Ellis.

The auction is the station’s largest fundraiser of the year aside from its semi-annual, on-air fundraising drives, according to Jacki Mayer, director of business operations and development, and an opportunity for listeners to meet their favorite radio personalities.

While last year’s event attracted 500 people and raised $16,000 for the station, Mayer expects this year’s auction to be even more successful.

“Yellow Springs has always been generous with us and that never seems to go away,” Mayer said. “People have a soft spot in their hearts for WYSO.”

The auction came about when listeners began donating items to be used as thank-you gifts for those who give money to station. According to Mayer, “the level of generosity got out of control” and WYSO decided to auction off the items to raise additional cash for operations.

To be auctioned this year in silent, live and online auctions will be a hot air balloon ride, a two-foot-tall ceramic vase, tree trimming, pilates lessons, horse acupressure, tax preparation, workforce development classes at Sinclair Community College, photography instruction, a ukelele, a flight on a vintage airplane, a yellow cashmere sweater with fur trim and rhinestone sequins, a guided canoe trip down the Little Miami River, and more.

In addition to the auction, WYSO raises money from corporate underwriters, state and federal grants and its membership. A full one-third of the station’s support comes from its 3,000 members, while about 10 percent is provided by a grant from the Corporation for Public Broadcasting, Mayer said. The station also receives significant in-kind support from Antioch University, which owns the station, and from Antioch College, which leases WYSO its space in the basement of the Sontag-Fels Building for $1 per year.

While the economic recession has made corporate fundraising more challenging, member support has grown over the last year, perhaps due to National Public Radio’s rising listenership, popular local programming and the loss of public radio station WMUB in nearby Oxford, Ellis said. Popular shows include “Filmically Perfect,” Vick Mickunas’ “Book Nook,” which recently returned to the air, and the Miami Valley StoryCorps, which sources stories from the community.

WYSO, which was started as an Antioch College student radio station in the 1950s, now has nine full-time and two part-time employees in addition to more than 20 on-air volunteers, and  broadcasts on 37,000 watts reaching a potential audience of one million listeners. The station has applied to increase its signal to 50,000 watts.

Since arriving at the station two years ago, Ellis has focused on increasing community content and local programming. Last week the station began training nine area people in radio production as part of a pilot program to build capacity in the community, partially from funds from the Yellow Springs Community Foundation.

Ellis, who has worked for National Public Radio since 1979, sees WYSO as truly unique in the world of public radio.

“WYSO has retained a distinct identity, retained a sound, retained a mix of music and news somewhat unusual, and a mix of professionals and volunteers that is rare,” she said.

An average of 60,000 listeners enjoy WYSO’s combination of syndicated and original programming, including such local shows as Jerry Kenny’s “Morning Edition,” Niki Dakota’s “Excursions,” and Juliet Fromholt’s “Kaleidoscope.” WYSO remains an important source of local news in an age when radio stations are being consolidated and local newspapers are going out-of-business, Ellis said.

“Everything is canned except WYSO — it’s coming from a satellite,” Ellis said. “Every night from 8 p.m. to 11 we have a live person — that’s huge.”

The evocative medium of radio is particularly appealing to listeners, Ellis said.

“Radio has a power to excite your imagination,” she said.“Radio transports you and it’s an intimate medium and you feel connected to the people you listen to.”

In addition to the auction, supporters can donate as part of WYSO’s membership drive, Feb. 28 to March 6, or attend a WYSO fundraiser bringing Chicago public radio host Ira Glass to the Victoria Theatre in Dayton on May 22.