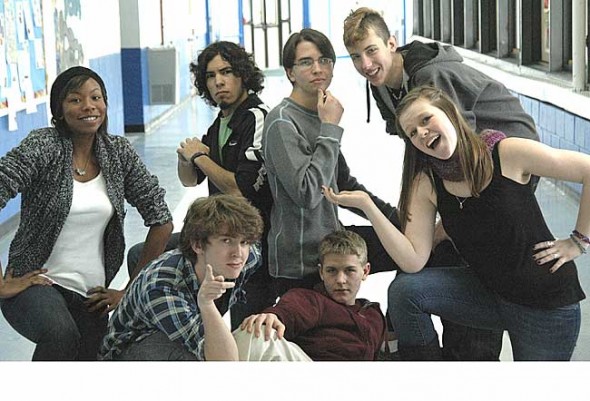 Yellow Springs High School presents the 2011 One Acts this weekend by playwrights, clockwise from left, Lizzy Gonder, Zeb Reichert, Quinn Leventhal, Rory Papania, Lauren Westendorf, Elliot Cromer and Adam Zaremsky. Proceeds from the plays are the major fundraiser for the production of the annual spring musical.

Creativity reigns at One Acts

It’s time again for the annual Yellow Springs High School One Act plays. A group predominantly consisting of members of the senior class have put together a total of 10 original plays with subjects ranging from bankrupt game shows to big adventures, Halloween candy to Vikings, phone calls to detectives, old men to prisoners, and Russian improv shows to landlords. With this the last year for many one-act writers and actors, the students are pulling out all the stops to ensure that their last year is also their best.

The One Acts are presented by the Yellow Springs High School Drama Club, Thespian Troupe #4671, and the YSHS Theatre Arts Association. The plays are produced entirely by the students who write, direct and act in them, as well as control all the tech work. The One Acts will be held at the Mills Lawn auditorium this Friday and Saturday, Jan. 28–29 at 8 p.m. and Sunday, January 30, at 2 p.m. Tickets are $8 for adults and $5 for seniors and students. The One Acts are coordinated this year by Jess Shake and are a major fundraiser for the production of the annual spring musical.

YSHS senior Lizzie Gonder wrote her one act about a conscientious landlord who has a tenant with Alzheimer’s. The tenant’s son is no longer paying the rent and the landlord cannot house her for free any longer, but also does not want to make the old woman leave. The landlord must make a decision on how to handle this delicate situation.

Senior Quinn Leventhal, along with junior Rory Papania, have both been involved in the One Acts in previous years, but this is their first year writing. Their one act, “Bobby’s Big Adventure,” follows Bobby, played by Elliot Cromer, as he engages in a rather large endeavor before meeting his girlfriend’s parents for the first time.

An old man is the subject of Colton Pitstick’s one act. The play features an old man telling stories about his youth and of life in general. Pitstick, a junior, performed a similar play last year.

Zeb Reichert, also a senior, has written three plays for this year’s show. The first focuses on a conversation between two Vikings after a raid, beginning with a simple question about childhood aspirations and becoming more and more ridiculous as it continues. Reichert’s second play is about an office worker who has to switch between a phone call from his wife, who he is arguing with, and his boss, who calls at the same time. The third follows two detectives as they investigate a murder.

Senior Elliot Cromer’s play portrays five prisoners who are about to be executed by a firing squad. When one of the prisoner’s startling past is revealed, there isn’t an army large enough to contain the mayhem that breaks loose.

Another senior, Lauren Westendorf, wrote two plays this year. The first, entitled “Trick or Treat,” features a hyperactive six-year-old boy after he comes home from trick or treating. The boy’s parents make up lies about the candy so that they can keep it for themselves. Westendorf’s second play, “Who Wants to be a Hundredaire” depicts what would happen if the game show “Who Wants to be a Millionaire” went bankrupt from giving away too much money. As the show goes on, the contestants and host run into problems due to the numerous budget cuts that change many aspects of the show.

Adam Zaremsky’s one act is also based on a television show. The senior took the idea of the improv show, “Who’s Line is it Anyway?” and explores what the show would be like if held in Russia.

This marks the last year for many of the writers of the One Acts. Lauren Westendorf, who has participated in the One Acts since her freshman year, describes the process of the One Acts as a stressful one, but one she is going to miss.

“The One Acts are an environment that’s like no other theater environment. We get everything together in a week with virtually no rehearsal and just hope that it all comes together and it always does,” she said.

Many of the other seniors also described a sadness with the ending of their involvement in the One Acts, but some are also looking towards this year’s One Acts in a more positive light, wanting to “go out in a blaze of glory” as Adam Zaremsky put it.

“I just want to make my fans proud,” said Elliot Cromer, who has written and performed in the One Acts his entire high school career. Based on the descriptions of their plays, pride is only one of the many emotions that the audience will experience this year.

Disclaimer: There is the possibility that plays in the One Acts might contain language or content not suitable for young children. Parental discretion is advised.