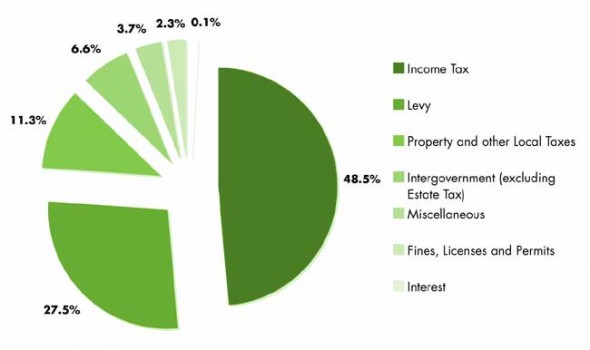 The Village budget for the 2011 general fund is slightly leaner than last year’s budget, with anticipated expenses down 1.6 percent from 2010. However, Village leaders plan to offer the same level of services as last year, having reduced spending in many small ways rather than a single large cut, according to Village Manager Mark Cundiff.

The 2011 general fund budget anticipates revenues of $2.5 million, compared to $2.8 million in 2010, and expenses of $1.9 million, compared to $1.8 million last year. The general fund budget, considered the barometer of municipal fiscal health, pays for the Village’s human services, such as safety and parks, along with street maintenance and repairs. The Village utility funds are based on utility fees, and are considered to be self-sustaining.

The drop in general fund revenues reflects anticipated cuts in state funding, which last year provided about 9 percent of total general fund income. The Village is anticipating a significant decrease in state funding this year, as the new Kasich administration has pledged to do away with or decrease two income streams, estate taxes and local government revenues.

Overall, Village leaders try to be conservative when planning the budget, both in estimating revenues and expenses, according to Cundiff in a recent interview, and the 2011 budget reflects that caution.

The conservative strategy worked well in 2010, as expenses came in about $71,000 below anticipated expenditures, according to budget figures presented at a Jan. 31 budget workshop.

“I don’t see the college going anywhere but up,” he said, a trend that will add to both income tax and utility revenues.

Consequently, Village leaders have said they will seek a renewal of the five-year property tax levy, which provides about $741,000 annually to Village coffers. But given the changing situation with state revenues, the Village knows it will have to make further, and perhaps more painful cuts, next year.

Because personnel costs are the general fund’s single largest expense, the Village will have to consider possible personnel changes for 2012, Cundiff said.

“There are some tough decisions coming up this year,” Cundiff said.

To see the complete 2011 Village budget online, go to http://www.yso.com.

Elected on a platform of budget cutting, the administration of new Governor John Kasich and state Republican legislators wasted no time introducing a bill to eliminate the estate tax for local governments. Because the estate tax is linked to deaths, the amount the village receives varies considerably year to year, from a little more than $80,000 in 2010 to more than $200,000 in some previous years. Because of their variability, the estate tax stream is not a line item in the Village budget.

While Republicans initially introduced a bill to eliminate the estate tax, recently they have talked instead of reducing the amount municipalities receive, according to Cundiff. This year Council agreed that the first $50,000 of estate tax revenues would go to the Village green space fund, so it’s not clear if it will receive additional revenue. The fund currently has a balance of about $190,000, but Council has promised that amount to efforts to secure conservation easements for two local farms.

The Kasich administration has also announced that it could slash the local government fund, which has been a regular source of Village income. The 2011 budget anticipates a $230,000 drop in revenues from that and other state funds.

Village leaders anticipate that recent years’ efforts to spark local economic development — steps that include the hiring of a part-time economic sustainability coordinator and the establishing of an Economic Sustainability Board — will begin yielding results soon, Cundiff said, resulting in higher income tax revenues for the Village. This year’s budget includes $50,000 for economic development, the amount that was promised by a previous Council from property tax levy monies. That amount mainly goes to the part-time salary of Economic Sustainability Coordinator Sarah Wildman.

Zoning, parks to get attention

Two items included in this year’s budget are updates of the Village zoning code and a master plan for the park system.

The long-anticipated zoning code update was identified as a priority in last year’s visioning project, Cundiff said. The current code is considered too restrictive of higher density development that could add more creative and potentially afordable housing options to the village. The hiring of a consultant to do the zoning code update, which is anticipated to cost about $75,000, should take place soon, with a finished update completed within six to nine months after that, Cundiff said. Hiring a consultant is necessary because Village staff does not have the time to do the extra work, Cundiff said.

Likewise, the Village parks budget this year includes $50,000 for a consultant to create a master plan for the Village parks system. Several Council members have requested such a plan so that decisions on parks, such as last year’s dog park question, can be made in the context of an overall plan rather than introduced piecemeal. The parks master plan will be paid for with monies set aside for the parks in the property tax levy.

The 2011 budget also includes $50,000 for skate park upgrades. That amount was set aside for the park in last year’s budget, but has not been used, Cundiff said. Skate park users have pledged to also raise monies for the upgrades, he said.

Proceeds from the five-year property tax levy will be spent in the ways promised to the community when the levy passed in 2006, according to the Village budget.