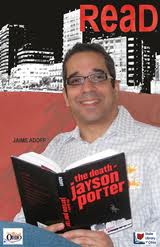 This winter two Yellow Springs intellectuals were featured in a new series of Web seminars designed to publicize the exciting research and coursework educators around the Miami Valley are engaged in. The SOCHE Talks series, put on by the Southwestern Ohio Council for Higher Education, has recorded 10-minute mini lectures by Jim Malarkey, chair of humanities and general education at Antioch University Midwest, and Jaime Adoff, a writer of children’s and young adult literature, as well as four other educators from Wright State University, Sinclair Community College and the Ohio Board of Regents. The lectures can be accessed on the Internet at http://www.soche.org/initiatives/sochetv.

Adoff’s presentation, Reflections on the Fictitious Teen Mind, focuses on the process of generating an authentic voice from the perspective of a teenager. Adoff acknowledges that his life may not be exactly like the characters of novels such as Names Will Never Hurt Me, written in the voice of four kids as they go about their school day dealing with bullying, ostracism, racism, the potential for school violence and a profound disconnect from their parents. But working from personal experiences that produce similar emotional effects, Adoff can magnify and then project onto his characters a story that young readers connect with, he said.

In working with incarcerated youth in Springfield last spring, Adoff used his book The Death of Jason Porter, about a 16-year old who lives in the projects in Florida with an abusive mother and plans to escape his life by jumping off his balcony. The story resonated with the youth, and Adoff hopes, fed his ultimate goal to help them get through the struggles in their lives.

For a better general understanding of the world, check out Professor Jim Malarkey’s world classics curriculum at Antioch Midwest. In his presentation, which was broadcast on WYSO last month, Malarkey shares the genesis of his own fascination with the world and its people. It all began when his college debate team was set to argue the Vietnam War, and he realized he didn’t actually know anything about Vietnam, its people, and what was important to them. In researching, he learned more about things he’d never heard about, and the voracious appetite to know eventually sent him to study and teach across northern Africa, Egypt and Lebanon, where he learned, through exposure to other cultures, that “each view of history was enclosed within the particular identity of the group that each individual was a member of. And that the conflicts that continued had something to do with the cultures, religion and history of that region,” he said. It became clear to him that to resolve the political differences that divided people, we would first have to understand the roots and drivers behind other cultures and civilizations.

So in 1984 he returned to Antioch College and eventually created a world classics program, which he hoped would be used for constructive good to open people’s minds to other lands and cultures and empower them to work cooperatively with others for positive change in society. The classics curriculum took students around the world in different periods of time to understand the philosophy, arts, literature, history and cuisine of each civilization. The course also situated that study in the context of our modern civilization for a look at who we are, where we’re going and where we ought to be.

From Africa:
Of Water and the Spirit, relates the culture of indigenous African societies
Gods and Myths of Ancient Egypt, what the people really thought
Epic of Gilgamesh, Mesopotamian poetry
Gathas of Zarathustra, the ancient religious writings of Persia, which influences Iranian culture today

From Middle East:
Epic of Gilgamesh, Mesopotamian poetry
Gathas of Zarathustra, the ancient religious writings of Persia
The Shahnama, the epic lore and history of Persia
The Bible, Hebrew scriptures and New Testament
The Qur’ran
Works of Sufism, the mystical branch of Islam

From India:
Mahabharata and Ramayana, ancient Sanskrit epics
The Upanishads, Hindu philosophy
The Buddhist Scriptures
Tibetan Book of the Dead, an explanation of consciousness after death

“To understand who we are and where we are as a world people, it’s vital to understand where we come from… Our world classics curriculum is an opportunity to realize the great wide world and be effective in making changes in it.”