As I mentioned in my very first blog for the YS News Web site, I happened upon Yellow Springs as a direct result of my romantic entanglement with my partner, Anthony. The two of us met while in Louisville, Kentucky at Spalding University, where we both went to college for words, in the school’s MFA in writing program. The time we spent there resulted not only in a domestic partnership, which in turn resulted in the village’s most adorable baby (I’ll hear no argument on this, fellow parents; I have the pictures to back it up), but also in full-fledged degrees in wordsmithery, the proof of which are now framed and hanging on our bathroom wall. 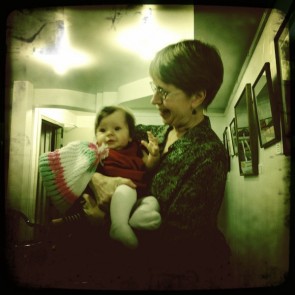 Barbara with Yellow Springs' cutest baby at the YSAC gallery after the show.

More importantly, however, we met lots and lots of other writers, many of them brilliant and awesome. Anthony and I had the great privilege of hosting two of those writers here in Yellow Springs on Monday night at the YSAC Gallery. Anthony, a poet, has occasionally (somewhat) jokingly stated that poets are people of a higher cultural caliber than fiction writers (as I am), and though this has yet to be verified scientifically, our poet friends, Barbara Sabol and Katerina Stoykova-Klemer, are certainly people of the highest caliber. I won’t waste much more space in this blog pontificating, but will instead provide a few highlights from the evening’s offerings.

The festivities began with music from Red Cedars, who are Dinah Devoto and Pat Kennedy, out of Villa Hills, Ky. The folk duo started with a Townes Van Zandt tune, “White Freight Liner”:

After the music, we all settled down to hear Barbara Sabol read from her new book of poetry, Original Ruse, recently released from Accents Publishing. The title of the book, she explained, is a play on the phrase “original sin,” and the book’s title poem reimagines the images and events associated with that phrase. I won’t reproduce the whole poem here, but I will share a brief passage from the poem that I really love:

Past the rows of self-tilling beans, yellow melons fattening
in the heat, the flowers she knew from their odor (naming them
herself – orchid, narcissus, skunk cabbage),
she discovered something new:

She knew the genus instinctively: Nightshade, lovely word.
She also fathomed that plants in this family could be toxic.
But that fragrance – perfumed dirt, musky green,
summer-downpour-heat-lightning pungent –
irresistible.

And it fell so easily from the vine.

Barbara kindly read one of my other favorite poems from the book, “Ode to a Grocery List”:

Katerina Stoykova-Klemer is many, many things in her current home in Lexington, Ky., which is where I originally met her before we both attended Spalding. She not only began Lexington’s foremost workshop group for writers, but now hosts WRFL’s “Accents – a radio show for literature, art and culture,” and is the founder and editor-in-chief for Accents Publishing, “an independent press for brilliant voices.” (Barbara, by the way, is one of those brilliant voices.) She also manages to find time to be an amazing writer herself. A native of Bulgaria, Katerina’s first book of poetry, “The Air Around the Butterfly” was published in 2009 by Fakel Express, in both English and Bulgarian; that is, all the poems in the volume are offered in both languages, side by side. Katerina began the reading with a poem entitled “Two,” which she read in both Bulgarian and English:

The night turned out to be a great success for all of us. As relative newbies to Yellow Springs, we hope to continue to be able to host such events. We know there are plenty of writers in town, but we also know that there are plenty who appreciate good, honest writing, and the oral tradition of poetry and story. Any and all suggestions on how we can turn our success into future successes will be greatly appreciated from anyone who’d like to share in the comments section of this post.

Thanks are due, of course, to the immeasurably talented Red Cedars, and to the amazing Barbara and Katerina, all of whom traveled several hours just to entertain us. Thanks also to the Yellow Springs Arts Council for allowing use of their gallery for the event, and especially to Jerome Borchers for facilitating our use of the space, and to Susan Gartner, who was limitlessly enthusiastic about the event and without whom it would not have been possible.

Visit katerinaklemer.com for more on Katerina and her poetry, and accents-publishing.com for more on Barbara’s book, as well as other work by fantastic poets. For more on Red Cedars, find them on Facebook.

One Response to “BLOG – Wordsmithery in action”