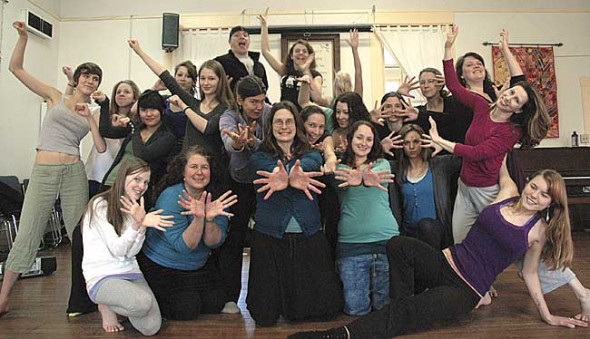 Expressing the inexpressable through dance

“She’s the epitome of how to express yourself through movement,” Heston said. “She has a great vocabulary, but it doesn’t compare to what can come out of her body.”

The piece is entitled “What Words Cannot Say,” and is one of 12 premiering at the Yellow Springs Community Dance Concert, at 8 p.m. Friday, March 25, and Saturday, March 26, in Antioch’s South Gym. Admission is $8 for adults and $5 for students and seniors.

The concert, a local tradition for more than 13 years, has never been a typical dance recital, according to producers Ali Thomas, Marybeth Wolf and Heston. Instead, its choreographers and 50 local dancers explore their own experience in unique and original pieces that combine the talents of seasoned professionals with passionate beginners. Drawing from the language of diverse dance styles — modern, jazz, ballet, hip hop, street, belly dance — this year’s choreographers have again crafted a show that will move audiences.

“We’re not just doing a recital to show off,” Wolf said. “We’re finding something personal and meaningful in our lives and embodying it.”

“When people watch dance, their brain behaves in the same way as if they were doing it themselves,” added Thomas. “We’re creating movement that not only give the dancers that feeling, the audience actually identifies with the feeling of the piece.”

Professionals with more than 40 years of experience share the stage with dancers who have never had training, an anomaly in the often-competitive world of dance, but typical in Yellow Springs, producers said. Anyone who wants to dance is included. This year’s concert features dancers as young as five to older than 50.

“Dancing here is the most cooperative thing,” Thomas said. “People respect what the untrained dancer brings — they might bring a depth of life experience. It’s more about exploration than perfection.”

Nevertheless, the dances, which have been practiced several times per week for the last three to four months, meet high standards, Thomas said.

Thomas’ piece, in collaboration with Lara Bauer, relies on percussive body rhythm in a high-energy dance set to electronic did-geridoo music. Called “Flam Tap, Body Slap, Be Your Own Drum,” the piece integrates moods of lightness and darkness among its 12 dancers, its “rigidity melting into non-rigidity,” Thomas said.

The seed for Wolf’s piece germinated from a single sentence she wrote at a recent workshop taught by former Antioch dance professor Dimi Reber, in which all the show’s dancers participated. Four solos and Wolf’s soul-plumbing, eight-dancer piece all evolved from the sentences dancers created at Reber’s workshop last fall.

From Wolf’s notion, “I find bones and I breathe into them,” she builds a piece that begins with drumming and wailing and moves through the healing process. Her dancers originated many of the dance’s phrases.

“I’m exploring women getting back their aliveness and instincts,” Wolf said. “It’s about going back to some losses and traumas that have paralyzed us and moving through that to be awake in the world.”

Also choreographing pieces are Wolf’s daughters, Jade and Erin, who, having danced with the group since they were young, testify to the mentoring the dance community provides. Jade’s piece explores how teenagers balance outside pressures with the desire to have fun, while Erin’s dance, Amygdales, is about the emotional and social boundaries in community set to a musical compilation overlaid with sound effects and recorded words.

While some pieces evoke emotional depth, others amuse with a light touch. Choreographer Victoria Walters will premiere a hip hop-influenced dance about the fight against commercial influence. Jill Becker and Terry Hempfling, traveling from New York City, will perform a duet. Gelmini’s dance incorporates live music by way of cellist Matt Minde and vocalist Jennifer Gilchrist. And kicking off the show for the third year in a row is local belly-dance troupe Egyptian Breeze, with a brand new piece.

Making a special trip back from Colorado to perform is Valerie Blackwell-Truitt, who originated the idea of the Yellow Springs Community Dance Concert and produced the show until last year, when Heston, Wolf and Thomas took the reins.

It was Blackwell-Truitt who saw that the local dance community was strong enough to put on its own concert, in addition to the regular Antioch Dance Concert that showcased the college’s impressive program, Wolf said.

Today community dancers participate in classes and workshops year-round, with concert proceeds offsetting the costs. The cadre of beginners and professionals only continues to grow.

“There are a lot of professionals in the community and people who just generally love to move and express themselves best by moving,” Heston said. “And they dance until their last breath. That’s just the way our community is.”

“Dancing is a lifestyle,” Wolf added. “Dancers come out of the woodwork here. There are people who have always wanted to dance or who used to dance and want to dance again.”

The group still struggles to find enough rehearsal space and a dedicated performance space remains a goal. This year, the dancers were grateful that the Village accommodated them in the many Bryan Center rooms and that Antioch once again provided South Gym and the technical equipment for the concert.

The group is partnering with the Center for the Arts Steering Committee with hopes of finding a permanent home for dance in Yellow Springs.  In the meantime, the annual concert is an opportunity for the community to show that it values dance as an art form.

“Dance has always been a way to express the inexpressible,” Wolf said. “And like any art form, the audience goes through the journey with us.”