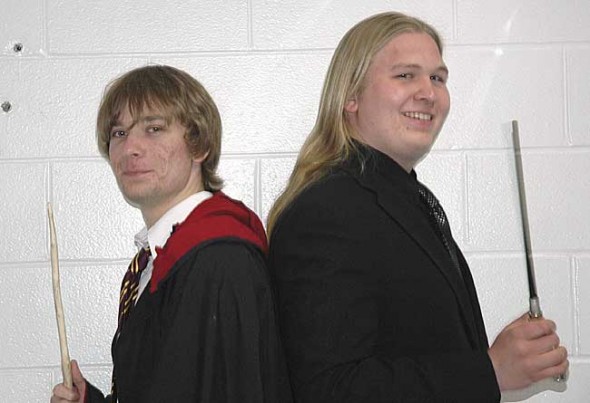 Yellow Springs High School seniors R.C. Worrell, left, and Phillip Kellogg are holding a two-part Harry Potter-themed event this weekend as their senior project, hoping to both entertain their peers and to raise money for literacy. The event, at Yellow Springs High School, begins with a 6 p.m. potluck on Saturday, April 9, followed by a 9 p.m. lock-in. Proceeds from the potluck and lock-in, which each have a suggested $5 donation, will benefit Book Aid, a British literacy organization. (Photo by Kelsey Cundiff)

The senior project requirements given to every senior at Yellow Springs High School state that each student’s project should “reflect a meaningful purpose that is either geared toward social action and community, self-education and growth, or education and facilitation.” This year’s group of seniors has taken those ideals to heart to produce a number of projects that could benefit the community.

Two of those students are Philip Kellogg and R.C. Worrell, who have combined their love for reading and Harry Potter to design a two-part Harry Potter-themed event. The event aims to be entertaining and fun-filled, as well as to raise money and awareness for literacy.

Kellogg and Worrell’s senior project will raise money for Book Aid, a British organization that focuses on promoting literacy in sub-Saharan Africa and Palestinian territories. The first part of the event is a community potluck, dubbed the Potterluck, at the Yellow Springs High School gymnasium. The event features various activities and entertainment, including a quiz bowl and a costume contest, as well as a presentation on Book Aid. Also planned for the night are two separate raffles, one with various items from local businesses, and the other with one grand prize, a Kindle electronic reader. The second portion of the evening is a high school student-only lock-in at the high school. Harry Potter movies will screen all through the night and into the next morning.

The decision to donate the proceeds from their event to Book Aid was an easy one for Kellogg and Worrell to make.

“A friend of mine told me about it and I looked it up and I thought it would be perfect for our project.” Worrell said.

Using Harry Potter, a British fantasy series meant for young readers, to benefit Book Aid, a British literacy organization, makes sense. The choice to make their senior project Harry Potter-themed also made sense to the duo, both of whom credit Harry Potter as a major contributor to their interest in reading.

“We both love Harry Potter. It’s what got me into reading,” Kellogg said.

The idea for the Potterluck started from a Facebook post by Worrell who suggested there be a Harry Potter day at the high school. After seeing the post, Kellogg thought that the idea would be a great one for a senior project, and after some discussion and planning between the two friends, the Potterluck and lock-in was born. Over the past three months they have written a grant proposal, reservd the gym, contacted businesses for raffle prizes and made a concerted effort to get their project off the ground.

Since its start in 1954, Book Aid has provided 25 million books to readers around the world. The organization was founded by Lady Hermione Ranfurly after she saw first-hand the shortages of books for children in the Bahamas while living there. Ranfurly contacted her friends and family back in the UK to provide her with surplus books to distribute to schools and libraries.

She continued these efforts once she returned to the UK and soon began to expand her efforts to other parts of the developing world. Last year, Book Aid donated over half a million books in 12 sub-Saharan countries in Africa as well as the Occupied Palestinian Territories.

Worrell and Kellogg encourage participants to attend both the Potterluck and lock-in, which have a $5 suggested admission donation. Those attending the Potterluck are encouraged to wear their best Harry Potter costumes, as well as bring a dish to contribute to the potluck. The Potterluck will run from 6 p.m. to 8 p.m. on April 9, and the lock-in will begin at 9 p.m. the same day until the next morning. Those planning to attend should RSVP and specify the food dish they will bring to the potluck by contacting either Kellogg or Worrell at school or by e-mail at potterluck10@yahoo.com. While students at the lock-in are allowed to leave at any point through the night, all comings and goings will be closely monitored by adult chaperones. Kellogg and Worrell invite everyone, even those who may not share their love for Harry Potter, to come to support Book Aid and their efforts.

“Being a community that is so united — we love to do stuff together. This is just another thing that people will love to do together where they can win prizes and learn about literacy around the world.” Kellogg said.