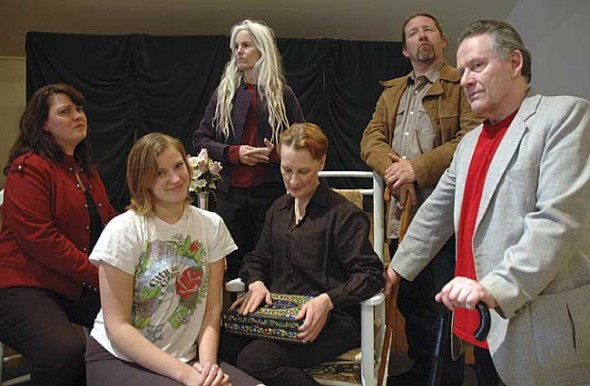 The Cherry Orchard by Anton Chekhov will be presented tonight, April 9, at 8 p.m. at Westminster Hall in the First Presbyterian Church, and next Friday and Saturday nights at the same time. The event is a fund-raiser in an effort to enhance the hall as a performance space. Shown above are, from left, actors Miriam Eckenrode, Natalie Sanders, Ali Thomas, Marcia Nowik, Howard Shook and Gary Reimers.

A group of local actors and theater-lovers are bringing to the village this weekend and next live theater in an effort to raise money to create a new performance space.

The actors will perform Anton Chekhov’s The Cherry Orchard at 8 p.m. on Saturday, April 9, in Westminster Hall at the Yellow Springs Presbyterian Church. The play will also be presented next weekend on Friday, April 15 and Saturday, April 16, at 8 p.m.. Admission is $10.

The proceeds are going to an effort to upgrade Westminster Hall into a performance space, according to play producer Kay Reimers, who is also a playwright. The group hopes to raise enough money to purchase sound baffles to enhance the hall’s acoustics, as well as to purchase dividers for a more intimate space and enlarge the room’s stage.

In all, the group hopes to bring back the spirit of community theater that has been missing from the community since the demise of Center Stage, Reimers said.

“The arts is a way of uniting diverse elements of a community,” Reimers said in an interview.

The group is not wanting to supplant the Committee for a Center for the Performing Arts multi- year effort to create a new performing arts center in the village, Reimer said. Rather, it envisions the Westminster space to be a supplemental venue, probably for small groups.