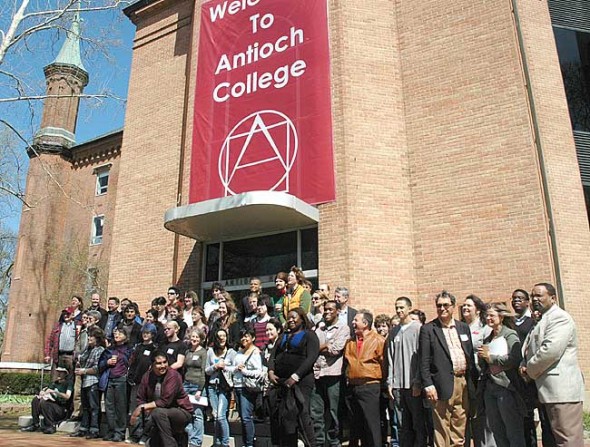 The Antioch College community gathered on the Main Building steps last Sunday during an open house attended by 24 of the college’s 45 admitted students. (Photo by Megan Bachman)

Unsure if she wanted to attend college, Jennifer Carlson took a year off after high school to work in an orphanage and school in India. But upon being accepted to Antioch College’s first new class, she is now re-considering college because of Antioch’s co-op opportunity.

“I don’t want to sign away four years of my life to go to school,” she said on a tour of the campus last week. “I’m interested in working and having experience in the world.” If she enrolls at the newly re-opened college this fall, Carlson, of Austin, Texas, hopes to study human rights and media.

“I’m ready for an adventure,” said accepted student Forrest Humphrey, who attended a youth initiative high school in southwest Wisconsin. “The most attractive thing to me [about Antioch] is this idea of community governance, of taking control of my education.”

Carlson and Humphrey were two of 24 admitted students who visited the college last Sunday ahead of a May 1 deadline to enroll.

“It was a really good cross-section of our pool,” said Kristen Pett, special assistant to the president for enrollment, in discussing the campus visitors. “In this group I see a really talented, adventurous, bright, diverse group of students with strong leadership skills.”

The prospective students toured the campus buildings in which they would spend most of their time beginning this fall — McGregor Hall for classes and Birch Hall for living and eating — and heard from Antioch alumnus and MacArthur Genius Award winner Timothy Barrett and recent graduates of the college.

“I think what came through is we have things to offer that other schools don’t,” said President Mark Roosevelt of the presentations. “For the right students, Antioch is well worth thinking about.”

Forty-five students have been accepted into the college as Horace Mann Fellows. If they enroll, they will have their full four-year tuition paid for by the college, while they would cover room and board expenses and fees. Before last weekend, six students had already committed to the college with a $450 deposit, and about twice as many have said they are definitely coming, according to Director of Communications Gariot Louima. An additional 30 prospective students are on a waiting list, he said. After the open house, more may commit to the college.

“We got overwhelmingly positive feedback from parents and students,” Pett said after the open house. “We actually had a number of students that came undecided and left decided — in a positive way.”

Students were most curious about student life, which is hard to imagine on a campus that currently has no students. And Pett was most impressed by the co-op experiences of alumni who spoke, she said.

“You could go to a school that has a football team … or where you’re going to actually grow as a person and have a résumé of actual experience,” said alumna Fela Pierre-Louis on a panel of 2008 graduates.

For Diana Lopez, it was the co-op opportunities, plus the free tuition and the chance to study abroad that attracted her to the college.

“When you apply for a job, the one thing they look for is experience,” said Lopez, who hails from Chihuahua, Mexico and hopes to study forensic psychology.

Sam Senzek, who wants to learn Japanese and pursue East Asian studies, is excited that she may be able to do so through Antioch. Senzek, of Lisbon Falls, Maine, looks forward to working closely with her fellow students.

“What interests me is the fact that it’s kids of a pioneering group starting a college over again — there’s going to be a unique group,” Senzek said.

“While they’re trying to re-build the program they will be incorporating everyone’s ideas,” Franco said. He was additionally attracted by the amount of attention he will receive as a student, the school’s history and the peaceful campus.

Nargees Jumahan said Antioch would give her the educational experiences she wants in a beautiful, natural setting.

“I can sit and meditate here,” she said. “This is how the earth’s supposed to be — to me it’s beautiful to explore and look at it.”

Jumahan said that if she weren’t accepted at Antioch, she would have joined the military. Jumahan now plans to work for women’s rights in Afghanistan, where she was born and raised, on one of her co-ops.

Greylyn Burk, of Shelbyville, Ky. said she appreciates how the curriculum’s global seminars will expand her thinking.

“It’s not just an education, it will make me into a better person,” said Burk. “It will be tough, but it’s something I want to do.”

Burk learned about Antioch from her mother, a self-described hippie who participated in student activities and protests on campus in the early 1970s. Because she is interested in film studies, Burk was excited to learn about the Little Art Theatre and the many local filmmakers she might be able to work with.

Twenty four-year-old Adam Abraham appreciates that the college treats its students more like adults and empowers them to take initiative, rather than being more like a factory that gives out diplomas. Abraham’s aunt attended Antioch in the 1960s, leaving the college after three years to stay on a co-op job helping at-risk youth.

“It really touched me to visit here and hear from all the alumni about their passions” said Abraham, adding he will definitely be among the first class that starts school on Oct. 4, with plans to study psychology, anthropology and history.

On a tour of campus, Admission Ambassador Shane Creepingbear told students to envision high-tech greenhouses and orchards on the golf course and a student lounge and café at the Olive Kettering Library. But bigger priorities for the college are upgrading the heating and cooling systems of Birch and McGregor, while these other campus renovations will depend upon fundraising, Louima said.

“The campus is in various states of disrepair, but it’s kind of romantic to think about all the people that have been here,” Abraham said.

Also visiting campus were seven high school underclassmen considering enrolling at Antioch in the next few years. Among them was 15-year-old Kyle Brennan from Carmel, Ind.

“I’m attracted by how much diversity and how accepting people are here,” Brennan said. “You’re accepted here no matter who you are — that’s a big thing for me.”

If he chooses Antioch, and the college is successful in its revival efforts, Brennan would enter in the fall of 2013.