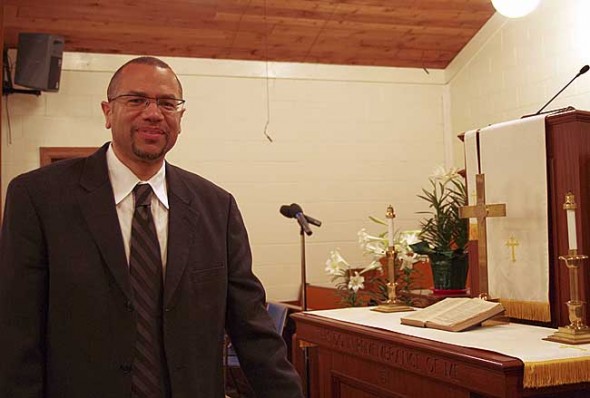 Timothy Liggins has been the pastor of the Central Chapel African Methodist Episcopal, or A.M.E., Church for a short time — only about five weeks. Yet as he greets people after worship on a recent Sunday, walking around the sanctuary shaking hands and giving a hug here and there, the bond he appears to share with members seems to have been in place much longer.

Liggins was appointed pastor of Central Chapel after Rev. Betty W. Holly, who had led the congregation for the past several years, became a presiding elder of the local district of the A.M.E. church and moved on to other duties. As the new minister, Liggins seems thrilled by the reception he’s been given.

“The warmth of this congregation is simply amazing,” he said, in a recent interview at Central Chapel. “They are truly filled with the joy of the Lord and so I consider it a tremendous blessing from God to be on this spiritual journey with them.”

Liggins has been traveling to Yellow Springs from Columbus, where he lives with his wife, Jamie, and their two teenage children. Both he and Jamie Liggins work full-time jobs in Columbus, which means they will probably continue to live there for the present. It’s possible, though, that in the future they will move to Yellow Springs.

“You never know what the Lord will have in mind for us five years from now,” said Liggins, who comes to the village on Wednesdays and some Saturdays as well as, of course, Sundays, when services are held.

Prior to his appointment at Central Chapel, Liggins led congregations in Circleville and, most recently, in Kenton, Ohio, where he served for four and a half years. His career as a pastor began in 1998, when he answered a “calling” to the ministry that, he said, he had not expected.

Liggins’ father was also a pastor in the A.M.E. Church. Growing up, “Everyone either told me, ‘You’re going to be a minister like your father,’” or asked whether that was his plan, said Liggins. “My response was always, ‘No. I don’t plan on going that route.’”

A series of “encounters” with the divine led him to change his mind.

He knew with the third encounter, he said, that “now was the time.” He said he felt as though God had his hands on his temples, he said, “as if 10,000 volts went through my body.”

He had a vision in which, “I was given a picture of Heaven and was standing before the throne in Heaven,” he said, “and told that, ‘when we don’t do what the Lord would have us to do, it’s not so much the punishment we’d receive but the lack of reward’” that a person who ignored such a call would come to regret.

Thus convinced, he began to take steps to become a pastor. He received his license to preach in the A.M.E. Church in 2000 and began pastoring in 2004. In 2005 he received a master of divinity degree from Payne Theological Seminary in Wilberforce.

He’s never looked back on his decision to pursue the calling.

“I’m experiencing joys that I never could have imagined in pastoring,” he said. “Obviously it’s difficult when you have to minister to someone who has just lost a loved one…but God’s presence is there with them to see them through.”

Central Chapel has a current membership of 129 people, and “from all indications, the membership is remaining steady, so we consider ourselves in a good position,” he said. If some local churches are losing members, this congregation is fortunately not part of that trend, said Liggins. Still, they would be happy to grow their ranks; Liggins said he thinks there could be “tremendous potential growth” of the church’s membership.

He described the makeup of the congregation as a “good mix of the generations.”

“We do value our seniors — there is so much wisdom that they give us…and so much history,” he said.

Central Chapel stands on a long-established tradition of African American achievement and community in Yellow Springs, said Liggins. “The African-Americans who settled here were very industrious — they started their own businesses and their own farms.” Their efforts created “a sense of cooperation and a sense of pride,” and “these two elements — cooperation and being productive — that’s why Central Chapel and this community as a whole can really flourish even to this day.”

When Central Chapel was founded in 1866, just 50 years had passed since the A.M.E. Church was formally established in Philadelphia. The roots of the church go back even further, to 1787, making it the oldest African-American denomination in the United States. This year marks the 145th anniversary of Central Chapel’s founding, and to celebrate, the congregation is planning a special program and a “homecoming event” for September. Liggins said they hope to “encourage people who grew up in the community to come back so you can celebrate our rich history and legacy.”

“I want some of the people who have so much of that history to share that history with us,” he said. “I want to make sure we have that opportunity to receive that rich history — because that only makes us better.”

Liggins may be new to Central Chapel, but he’s already enthusiastic about the idea of remaining there long-term.

“I hope that it is in God’s will that I’m here for many years,” he said. If that desire is fulfilled, Liggins could have the opportunity to witness many more of Central Chapel’s milestones.