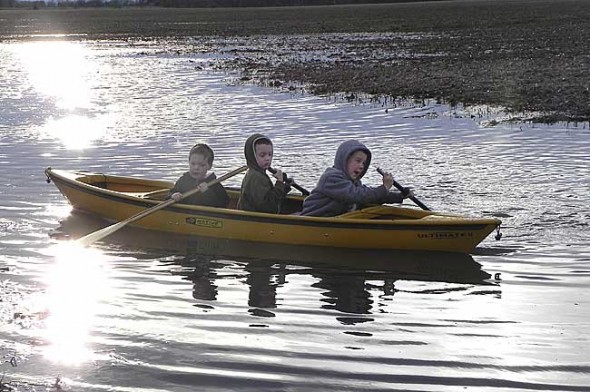 From left, Will, Noah and Logan Spracklen canoed across a flooded farm field earlier this week at the family’s Green Township home, where in a normal year the corn would already be several inches high. (Submitted photo)

Across town, heavy rains fill gutters, puddles pool on lawns and sump pumps struggle to keep basements dry. But this rainy April — already the second wettest on record in Dayton — is doing more than annoying homeowners. It has area farmers worried as they delay planting and wait for their fields to dry.

“[The rain]’s determining how things grow and when they grow — it’s not just an issue of whether or not you take an umbrella to work,” said Doug Christen of Smaller Footprint Farm on West Jackson Road, where he cultivates one-and-a-half acres of vegetables.

Christen has delayed planting of many of his spring crops, while those already in the ground, like his peas, are growing more slowly since they’re sitting in standing water.

The wet weather has thwarted larger farmers as well. Many of their fields are too wet to plant corn and soybeans.

“They’re all just entirely saturated,” said Larry Barkley of the fields he cultivates, about 6,000 acres across Clinton, Clark and Greene counties. Last year Barkley was finished planting corn by April 23. This year he hasn’t even started and with more rain in the forecast, he may not plant for a while.

“We’re entirely under the circumstances of the weather — that’s one thing we have no control over,” Barkley said.

Through April 25, the 7.65 inches of rain measured at the Dayton International Airport made April the second wettest on record, behind the 9.20 inch record set in 1996, according to the National Weather Service. This is 4.31 inches more than normal, and significantly higher than last year’s 1.66 inches. The greatest 24-hour rainfall total, at 2.31 inches, took place April 19–20, while 16 days this month have seen rainfall of 0.01 inches or more. It’s also been 3.5 degrees cooler than normal.

After the rain ceases, it may take another one to two weeks of sunny, dry weather for the ground to dry out before the planters can traverse the field, according to Jim Timmons, who farms 250 acres of his own land off of U.S. 68 in addition to other properties in the area.

“Weeds are growing and we can’t go in there with the normal tillage equipment,” Timmons said. The weeds on his properties have been shooting up, fueled by the rain, and he may have to put an additional layer of herbicides down this year at an extra cost.

Even still, Timmons isn’t too worried. According to conventional wisdom, corn grows best in the area when planted on May 10, he said. For every day after May 10 that the corn is not in the ground, its yield drops by about one bushel of corn per acre.

Those planting soybeans this year may be in better shape. They have until May 25 to get the beans planted, according to Mike Haubner, an Ohio State University agricultural extension agent in Clark County. To Haubner, recent longer-lasting weather patterns are more troubling than this particular spell of rain.

“If you look at our weather the last several years, we tend to have long periods of wet weather and long periods of dry weather — and that’s what’s scary,” said Haubner, a professor emeritus at OSU who also has a small farm. “It used to rain you out for a day, but this is crazy.”

Prices for corn and soybeans have skyrocketed over the last few weeks, since the rainy weather has been prolific over nearly the entire Midwest, Hauber said. Corn is selling for more than $7.50 per bushel, compared to its 10-year average of about $2.40, while soybeans are nearly $14 per bushel, about twice as high as normal.

“We’ve never seen prices like this ever [for this time of year],” Haubner said. “The prices they’re quoting are unbelievable.”

But Barkley said he’s not thinking about prices.

“It doesn’t matter how much it costs if you can’t produce a crop,” he said. Barkley, who has been farming since 1960, said he has experienced worse — specifically the summer of 1981, when rain started falling on the evening of April 7 and practically didn’t stop until late June. He finished planting corn on July 7 that year and ended up losing a lot of money.

Lamar Spracklen, who farms 2,600 in Greene, Clark and Madison counties with his family, is optimistic.

“Add another two weeks [of rain] and it’s going to get more serious,” Spracklen said. “But if it dries up, it’s not real late at this point.”

For Christen, the rain has meant less mechanical tilling, though he has been able to prepare some beds using manual tools. And it’s not as bad as it could be, since he’s built up raised beds and established grass foot paths at his farm, keeping the water away from the crops and preventing soil erosion.

Among its other advantages, “I can walk around the field without being caked in mud,” Christen said. Shares of weekly vegetables are still available at Smaller Footprint for $450 for the season.

The silver lining for Timmons is that his 120 acres of grass — from which he makes hay to feed dairy cows — has been growing prolifically in the rain. But dry weather is still required to cut, cure and bale the hay, building up his family’s work load when the wet weather eventually departs.

Overall, Timmons is confident he’ll be able to grow food this year.