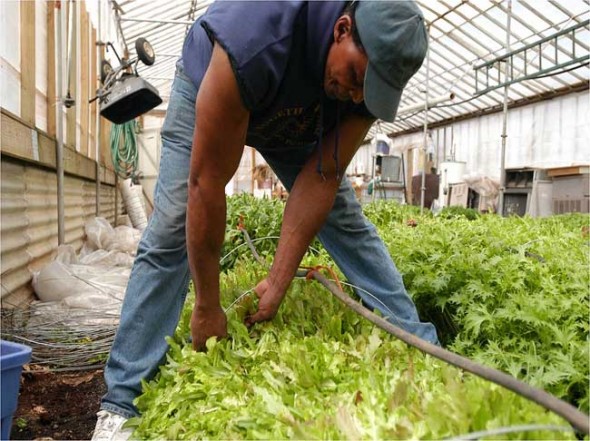 Former NBA star-turned-local farmer Will Allen is featured in the movie "Fresh" coming to the Little Art. Allen will also speak in Yellow Springs in November. (Photo courtesy of Growing Power)

The Winter and Summer Farmer’s Markets are jointly sponsoring a local community screening of FRESH, a documentary film by Ana Sofia Joanes that celebrates food architects around the country who are reinventing our food system with sustainable agriculture initiatives.

The free screening will take place on Saturday, June 4, at 4 p.m. at the Little Art Theatre in Yellow Springs.

About the Film
FRESH is a reflection of a rising movement of people and communities across America who are re-inventing our food system. FRESH celebrates food architects who offer a practical vision of a new food paradigm and consumer access to it. Encouraging individuals to take matters into their own hands, FRESH is a guide that empowers people to take an array of actions as energetic as planting urban gardens and creating warm composts from food waste, and as simple as buying locally-grown products and preserving or freezing seasonal produce to eat later in the year.

Throughout the film, we encounter inspiring people, ideas, and initiatives happening around the country right now. At the Growing Power urban farm in Milwaukee, Will Allen is turning three acres of industrial wasteland into a mecca of nutrition for his neighborhood. In Kansas City, we witness David Ball revitalize his community, turning the modern concept of the Supermarket on its head by stocking his Good Natured Family Farm stores with produce from a cooperative of local farmers. And, we journey to Joel Salatin’s farm in Virginia’s Shenandoah Valley to witness his methods for closing the nutrient cycle, allowing cows, chickens, pigs and natural grasses to flourish and produce without ever an ounce of chemical fertilizer or industrial animal feed.

FRESH tells the stories of real people, connecting audiences not with facts and figures or policy analysis, but with examples of personal initiative and concrete ways to engage in a new food model.