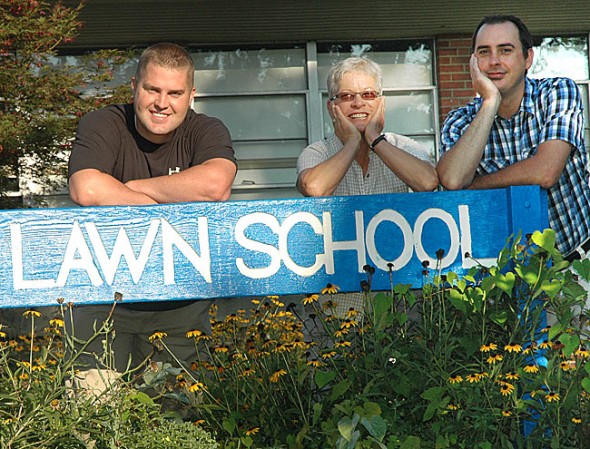 After the challenges of his first year at a new job, Principal Matt Housh has settled in and feels right at home at Mills Lawn School.

“Last year I learned things about our parents and children that I didn’t know,” he said in an interview last week. “And I’m always amazed at how dedicated and passionate our staff is. Now relationships are in place, and this year we’ll hit the ground running.”

Overall, he said of the school, “We have some pretty cool stuff happening” this year.

First, the total count of Mills Lawn students, about 380, is encouraging. While that number is consistent with last year, it feels like growth because the school graduated an exceptionally large sixth-grade class in June, and expected a smaller student body this fall. But new families with children have moved into the village, including staff and faculty at Antioch College, he said. The total number includes 23 open enrollment students, and some out-of-town students could not be accepted because classes were full.

“We have a healthy number of students in every grade,” he said. “We’re not overflowing, but our seats will be filled.”

Last year, Mills Lawn teachers engaged in a series of discussions regarding ways the school could be improved, according to Housh, who said several initiatives that arose from those talks will begin this year.

First, kids will have recess before lunch rather than after, as had been the practice.

“Research shows the benefits of this,” Housh said. “Kids get their energy out before lunch, and they make better choices about eating.”

The school, with the help of district maintenance supervisor Craig Conrad, is also creating a second computer lab, “using existing space in a creative way,” according to Housh, who said the school struggled last year with fitting all of its students into a single lab. The new computer lab will be located in the primary grades wing, and will be primarily for the younger students.

The school will also this year implement new assessment tools for students, “so we know what the strengths and weaknesses are” for each child, he said.

And teachers have improved their intervention process for students with academic or behaviorial problems, to make the process “more effective and efficient,” he said.

School leaders also hope to initiate a dialogue with a variety of local resources, including artists and Glen Helen, about establishing collaborative relationships.

“Last year we turned over every stone looking at what things we could do better,” Housh said. “We found some building protocols that needed to be updated, and the teachers did the groundwork. We have a lot on our plate and it’s all good things that people wanted to pursue.”

The school also has two new recently-hired teachers. Dan West will be the new physical education teacher, replacing Jutta Galbraith, who retired last year. West formerly taught at Valley Forge Elementary in Huber Heights, where Housh was previously principal, but Housh said he stepped back from the hiring process so that the hiring committee could judge West on his own merits.

“He rose to the top in every interview,” Housh said.

Carol Culbertson is the second new hire, and will spend about half her time teaching enrichment courses for all students and half teaching the ILE, or gifted students. Culbertson had formerly retired from working in Huber Heights, although not directly with Housh, but she took the half-time job because she wanted to work in Yellow Springs.

“It’s a great team,” House said. “We’re all excited about the changes.”

Formerly the principal at Valley Forge in Huber Heights for two years, Housh already lived in Yellow Springs with his wife, Deb, and children when he took the Mills Lawn job a year ago. He wasn’t sure if working as principal in the same town where he lives would be comfortable, he said, and has found that he enjoys being even more immersed in the community than he was before taking the Mills Lawn job.

Even more important, Housh said he feels that he can be himself at Mills Lawn, including sharing his passion for progressive educational ideas.

“What I learned is that I can relax and let my ideas flow more easily, because others share them, and are supportive,” he said. “This is a family here. This was such the right choice for me.