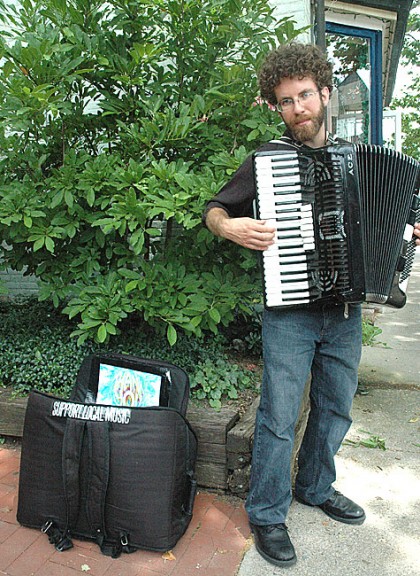 Street musician Ben Hemmendinger can often be found in front of Tom’s Market playing his accordion. He returned to the village about six months ago, having lived here until he was 7. (Photo by Diane Chiddister)

Ben Hemmendinger says that his mom insists that when he bought his first accordion at age 8 (with a $20 gift from his grandmother), he said someday he’d play the instrument in the street. But he’s puzzled by the story, because Hemmendinger can’t recall having seen street musicians at that age, and doesn’t know where he got the idea.

But regardless, Hemmendinger now finds himself living out his childhood fantasy. In the past few months he’s joined the world of Yellow Springs street musicians, and taken his place as its first accordion player. On summer days he can often be found in front of Tom’s Market, offering his improvisational blend of Eastern European and Irish music, with the occasional 60s rock tune thrown in.

In recent years Hemmendinger has been playing his accordion on streets across the country, beginning in New York City, then moving to Flagstaff, Ariz., then Bodega Bay, Calif. Most recently, he plied his trade in the subway system of San Francisco.

When Hemmindinger came to Yellow Springs about six months ago, he didn’t intend to stay. Rather, he was making a visit to his hometown, having lived here until age 7, when his family moved to Schenectady, N.Y. But things turned out differently than Hemmindinger expected after he started playing music downtown.

“I was surprised,” he said. “Not only was I making as much money as I had been before, but people would stop and talk to me. It felt very beautiful and familiar.”

Hemmendinger said he has many good childhood memories of Yellow Springs, including gathering walnuts to make walnut pancakes at the Community Children’s Center, and “lots of memories of walking around downtown.”

But he was only 7 when his family moved to upstate New York after his father got a job teaching computer programming at Union College.

Hemmindinger comes from a family of artists and musicians — his mother, Gail Kort, was a well-known local artist before she moved to upstate New York, and his brother, Marko Packard, plays guitar, saxophone and Irish flute — so he comes by his passion for music honestly. Both his parents love folk dancing, and he grew up hearing haunting Balkan melodies at home, as well as his father’s classical favorites.

His first instrument was piano, which, he says, he banged on as a young child whenever a piano presented itself. “In self defense,” he says, his parents found him a piano teacher. As he grew older, he grew partial to “the sound texture of the breathing instruments,” learned clarinet and taught himself to play the accordion.

“It’s a lush sound,” he said of the accordion. “It feels like being able to sing with many voices at once.”

In high school, art and music competed for Hemmendinger’s attention, and at first art was the winner, leading him to attend the renown Cooper Union school in New York City. However, Hemmendinger grew increasingly uncomfortable with “the business of joining the art scene,” and its emphasis on being “hip, relevant, conceptual, smart and on being noticed,” he said.

“I didn’t like the elitism of that world, making expensive objects,” he said. “I recognized that I had to be making art, but I didn’t have to be marketing it.”

So instead of making art, Hemmendinger began making music on the street. He played his accordion in Tompkins Square Park, and found role models in the creativity of other street musicians, especially ones who had created their own original sound. He cites as especially inspiring the subway musician Bradford Reed, who plays a self-designed modified lap guitar with pencils woven between the strings, with percussion and bells on the side.

“He’d dive into this thing and sound like three or four people,” Hemmendinger said. “It was inspiring that he had an intensely personal process and came out with a new sound. There was a sense that what he was offering was what he had, not necessarily what people wanted. It was very rich stuff.”

Some of these musicians had what Hemmendinger sought for himself, their own authentic voice. He began focusing more and more on developing that voice and found that his was “a fusion of all the things I like,” including the Balkan music he grew up with, the Irish melodies played by his brother, and 60s rock tunes, woven together with a heavy dose of improvisation.

So Hemmendinger continues to explore his musical voice on the streets of Yellow Springs. He’s been pleasantly surprised by the “level of non-competition and generosity there is here for art and music,” and the collaborative nature of local street music.

“So many people have joined me as I play or let me play with them,” he said, stating that he appreciates both the town’s small size and its relatively large number of musicians.

And when he’s not playing the accordion, Hemmendinger also pursues his interest in freelance computer programming.

“I really love programming,” he said. “It’s a language and a puzzle and a clean logical world.”

So while he didn’t expect to settle down in Yellow Springs, he finds himself putting down roots of sorts, living now at Radical Roots farm just north of town. His newest endeavor is raising goats for milk and cheese because “they fit into a permaculture farming scene very well,” as well as keeping the grass and hedges trimmed. So this interest may tie him to Yellow Springs for a while.

“That will take some time,” he said of his goat-raising endeavor. “I’ll be here.”

Hemmendinger wants to thank all the people who dropped a dollar in his case when he’s playing music on the street, or stopped to talk for a while.

“They are literally the reason I’m here,” he said.