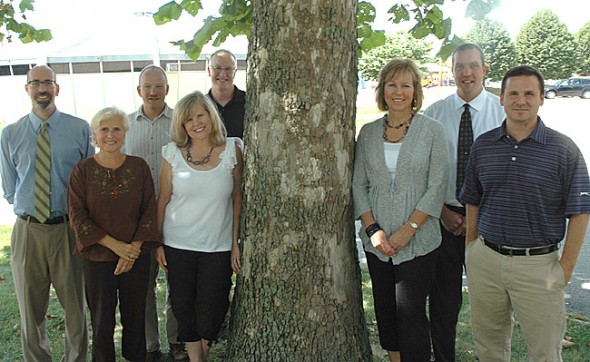 During Tim Krier’s first year as principal at Yellow Springs High School/McKinney, teachers and staff met in small groups considering how they could serve students better. And this year, Krier’s second on the job, the schools are using the results of those discussions to implement new programs.

“We’re excited about moving forward with the heavy lifting we did last year,” Krier said in an interview on Friday, Aug. 19. “We’ve got gobs of good stuff going on.”

Teachers are most excited about the school’s new academic lab, a 30-minute period during each school day aimed at providing extra help to students who need it, according to Krier.

Previously, students who needed extra help had the option of coming to school early at specified times two mornings a week, and not surprisingly, only the most motivated took advantage of that opportunity.

“We realized we needed a better structure to help kids who need it,” Krier said.

So the school scheduled a regular time daily, during school hours, to provide that help. Leaders shaved two minutes off each period, eliminated a morning home room and began the school day five minutes earlier to end up with an extra half-hour, to take place right after the second period in the morning, “when kids are still fresh,” Krier said.

Each week on Friday, teachers will post which students they want to work with during the academic lab time the following week. Students who are not asked to work with a teacher have their choice of how to spend that time: they may opt for a quiet study hall, a collaborative study hall in which they work with other students on a project; time in the fitness room or the opportunity to work on an art project. Or students can just show up at a specific teacher’s room if they feel they need extra help in a class.

As well as providing a structure for academic support, the new period offers students more responsibility to choose how they spend their time, Krier said.

School teachers and staff are also planning an event that will enable students to take responsibility for addressing some school-wide challenges. Parents, teachers and students took a survey last spring in which they identified what they perceived to be the school’s strengths and weaknesses. The results of those surveys have been tabulated, and the top 10 problems identified, Krier said.

At the end of September, trained facilitators will spend several days at the school, first working with teachers and then students on how to identify and then implement action steps to address the problems identified. Some of those problems include school governance, disruptive student behavior, a lack of electives and drug use, Krier said.

“It’s a great opportunity for us to begin having some good dialogue on these issues,” Krier said.

Other new initiatives include an “ExFest” near the beginning of school, during which students have the opportunity to learn about extracurricular activities, in order to promote more participation.

School leaders are also focused on improving communication between the school and parents, according to Krier, who said that new assistant principal Jack Hatert will be instrumental in this effort.

“He has a great organized brain to help make this happen,” Krier said of Hatert.

Some examples of this effort is a Google calendar of school events on the school’s new Web site and making sure that parents can download needed forms from the site. School leaders will also be more proactive in alerting parents to changes and deadlines, Krier said.

“It’s a shift in our thinking, from assuming that people know what’s going on to doing a better job at communicating,” he said. “We know that communicating better makes everything easier.”

Hatert, formerly a math teacher at the McKinney School, will continue to teach half time and perform administrative duties the other half.

Other intra-school shifts include the placement of Linda Sikes, formerly the counselor at Mills Lawn, as the new counselor for grades seven through 10. And Pam Stephens, who has formerly served as receptionist and support person for the counseling and admissions office, will continue to perform those duties, but also provide a second set of hands at the high school’s front desk.

Students will see completely new faces in several positions. Jeff Collins will teach math and physics, and Steve Rossi is the new half-time athletic director. Julie Lorenzo is the school’s new secretary, having previously held that position in Xenia schools. And Paul Comstock will be the schools’ new study hall/behavior management aide.

His first year on the job was “a year of tremendous learning, of questioning my assumptions,” said Krier, who previously served as a building principal for nine years in a Virginia school before working for the Ohio Department of Education and then coming to Yellow Springs.

He and his family are enjoying the community, and all it offers, he said, stating that they decided against going away this summer in order to stay home in Yellow Springs’ and take advantage of its many activities.

After a year of getting to know Yellow Springs young people, he’s impressed with them, he said.

“They’re funny and creative,” he said, stating that he’s also been impressed with the clarity with which they communicate to adults.

After the challenges of learning a new job and a new place, he’s eager to get back to work again, Krier said.

“We’re cookin’,” he said of the high school and McKinney school staff and programs. “We’re spent a year determining priorities and now we’ve got the stuff we want put in place.”