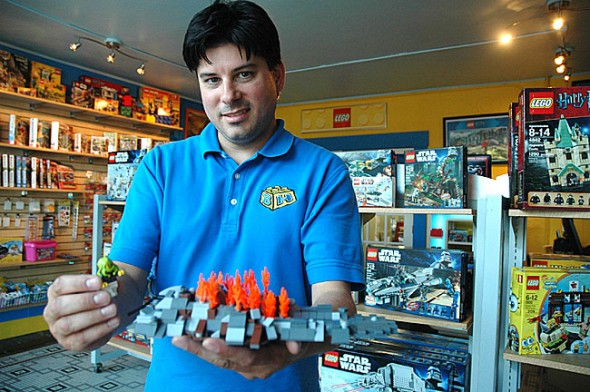 Kyle Peterson opened the Lego set and accessory store Blokhedz on Dayton Street last month. From the space he also runs Brick Forge, a successful minifigure customized accessory company that he started in his garage. Peterson, an Adult Fan of Lego, recently showed off a meteor crash he built for the store’s window display. (Photo by Megan Bachman)

A world of Legos not just for kids

Playing with Legos may be a child’s game, but the colorful plastic bricks have long been Kyle Peterson’s adult hobby and, for the last six years, his livelihood. From a new downtown storefront, Peterson is building two Lego businesses, brick by brick.

Blokhedz, at 136 Dayton Street, retails Lego sets, key chains and minifigures for kids and adults alike. Out of the store, Peterson also runs Brick Forge, a successful minifigure customized accessory company that he started in his garage.

“We could’ve stayed in a garage but I’ve always wanted to open a toy store — it’s a childhood dream,” Peterson said. Having recently moved just north of Yellow Springs, he found the village the perfect place for his new store.

“We wanted to bring something fun to the Yellow Springs community — there’s not much to take kids into,” Peterson said. In the newly renovated space that was once Center Stage and most recently Pass-it-On-Kids, Peterson envisions Lego building workshops and Lego-themed birthday parties. Already Blokhedz has an elaborate Lego window display and sells Lego sets like Star Wars, pirate ships, cities and Harry Potter plus Lego t-shirts, Lego candy and accessories.

As a Chicago youth, Peterson played with Lego castle sets and built spaceships until they were too big and would fall apart. But role-playing with Lego minifigures, the one-and-a-half-inch plastic people also known as minifigs, was the most fun. At nine, Peterson took a paintbrush to his minifigs, turning them into orange and green space aliens. Years later he would create a minifig customization company selling molded plastic swords, beards, mohawks and helmets to Lego fans around the world.

“We looked at what Lego didn’t make and made it,” Peterson said. “We were one of the first to bring custom elements to Legos.”

“[Lego] is an expensive hobby, so it’s much easier to collect minifigs,” Peterson said.

While Peterson’s customers are increasingly children, at first they were largely other Adult Fans of Lego, or AFoLs, like himself.

“To build and play with a kid’s toy, we felt a little embarrassed,” said Peterson, 37, of AFoLs. But once they found one another, online and at Lego shows, “then we didn’t feel so bad,” Peterson said.

“Now it’s not so nerdy to play with Legos,” he said.

Most young children start with Duplo bricks before getting into Legos, Peterson said. The appeal, in the words of Peterson’s five-year-old son, Merrick, is in their versatility.

“It’s cool because when it comes apart you can always re-build it,” Merrick said.

Between the ages of 13 and 16, many Lego fans give up their bricks for more adult pursuits, entering the “dark ages” of their Lego lives, Peterson explained. He had his own Lego dark age when he abandoned them for model rockets as a teen. He re-kindled his Lego love when, after graduating from Cedarville University and working his first job, he decided he needed a hobby. He purchased a Lego diving set (he was a certified diver) and then promptly phoned his mother to ask for the brown suitcase in storage with all of his childhood Legos.

“Our generation grew up with it and now that it’s cool to have a hobby, my hobby is Legos instead of motorcycles,” Peterson said.

Lego culture is on the rise and with sales bigger than they’ve ever been, according to Peterson. Even for NLPs, that is, Non-Lego Persons, Blokhedz sells an architecture series, with Lego versions of the Sears Tower, Frank Lloyd Wright’s Falling Water, the Guggenheim Museum and more.

Though video games and sports compete with Lego play, the hands-on creativity of Legos can’t be beat, he believes.

“Nothing compares to feeling something in your hands,” Peterson said. “It’s the satisfaction that ‘I created this and I can take it apart and re-build it whenever I want.’”

Blokhedz, which opened in June, is growing as well. Peterson, who runs the shop with his wife Rachel, spent two months remodeling the large rental space. He patched holes, tore out tarps and fiberboard, re-insulated, installed Lego-themed yellow, red and blue checkerboard rubber flooring and took down boards from the rear windows to let in more light. He hopes to run workshops from the space, including mosaic building and Lego robotics, with teachers of all ages.

“Yeah, we could teach them how to build things,” Merrick Peterson said excitedly.

Peterson’s children are a continuing source of inspiration for the business, Peterson said. On the advice of his son, Taloyn, 9, Peterson is re-building the store’s Lego window display, currently a tranquil downtown scene, into an alien invasion.

“Yellow Springs is going to be invaded by aliens in 2012,” said Peterson, who spent the day building a meteor crash for the display, with broken pavement, flames and all.